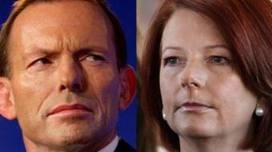 Gillard lurches daily between crises that would have seen off a male PM 18 months ago but Aussies are a sympathetic lot, particularly when it comes to women.

The unprecedented attack on Abbott is well orchestrated and has a sinister purpose. It’s no secret that Gillard’s foreign recruit McTernan is behind this politics of divison. This grubby little tabloid muckraker has been stealing our historic model of fairness in political debate.

Most fair-minded Australians have judged this Gillard Government an unmitigated disaster. Those who believe otherwise are hardcore deniers pointlessly sugar-coating an assembly line of stools.

Sexism is anathema to misogyny. Sexism is a part of life and I hope it never changes. Misogyny is a misnomer and used in error by Gillard against her opponents. How can any Aussie bloke hate women? I have never met anyone who hates women.

If Gillard and her crew of feminist nasties wish to denounce sexism then they should lose their high heels, makeup kits and sexy underwear. Gillard uses expensive perfume, lipstick and rouge, she bares her shaven legs in high heels, dyes her hair red, displays a cleavage and flirts with sweaty blokes. Is that not sexist?

If a bloke wears dull suits, covers his legs and chest, doesn’t pluck his eyebrows or constantly reapply lipstick from a portable compact, is he really the sexist species?

So, why lipstick? Well, the colour red in all species indicates sexual arousal. Is Gillard trying to indicate something else?

High heels and bare shaven legs are not meant to be sexy? Who is Gillard trying to kid?

A perfumed cleavage is not intended to attract the male eyeline? Bullshit it’s not!

Gillard’s women overtly display their sexuality in varying degrees of effectiveness, even Christine Milne tries very hard. To not “try” would invite derision from both sexes.

What is more sexy than a well rounded Norman Lindsay bottom, a fastidiously manicured front bottom or a pair of voluptuous breasts?

So what’s this sexist nonsense all about? “Show us ya tits!” doesn’t have the same ring as, “Show us ya hairy chest”.

The “deplorable” claims of sexism are no more than the highlighting of the delicious difference between male and female.

Gillard’s description of me as a “sexist, misogynistic nutjob” is probably half right. Sexist, yes absolutely! Misogynist, definitely not! Nutjob, could be.

Abbott, Gillard claims, said women may be less capable. Abbott is right, in a physical sense. There is no area of physical ability that a woman can even get close to competing with a man.

The jury is still out regarding other abilities. There is no female Grand Master in art or chess. You would think they would excel in fields of coiffure, culinary, millinery and at least be competitive in design, architecture, philosophy, physics, even quiz shows. But no, and female forays into politics have been less than stellar. Could we be wired differently? Heaven forbid!

Last time I beheld a naked woman, I noticed two yummy bumps on her chest and wide hips that permitted childbirth. Women proudly display their femaleness and even play the role to advantage. But one word about it from us red-blooded blokes and we are met with howls of sexism.

The sexist card that McTernan plays on behalf of the ALP will fail. It has already failed, the politics of division is not the Australian way.

We love our women and our women love us and that’s the way we want it to stay.

So, Mr McTernan, take your dull grey, unintelligent, ugly pock-marked head back to the UK and stick your miniscule appendage where it might be welcome.

Ooops, is that sexist?