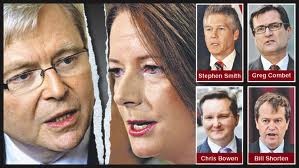 While Roxon and Shorten desperately attempt to shove the toothpaste back in the tube, Caucus grapples with the prospect of Gillard dragging them to oblivion.

Misogynistic, sexist nutjobs aside, the Wilson/Gillard scandal will not go away this time but it could become an irrelevance if Gillard isn’t there.

There is some serious number counting going on in Caucus right now, phones are running hot between Bali and the beltway. Kevin Rudd believes he is still in the hunt. He is not of course and never has been since Labour first sailed into office on his coat tails. But there is always one mug in the pack who will embrace a poison chalice.

Gillard must resign. Her position is now untenable. Deputy Swan may slide unopposed into the position by default. That is Labor’s best option and it’s still a bad one, even if Swan accepts.

Regardless, if Labor is to have an effective Opposition bench after the next election, Gillard must go, and go quickly with as little fuss as possible.

Former partners Roxon and Shorten have done their best to paper the cracks, all to no avail. Attorney General Roxon broke the law by attempting to influence the Ashby/Slipper case. This was subjudice at best and seeking to pervert the course of justice at worst. An extraordinary move for the nation’s first law officer. But the word “extraordinary” becomes ordinary when describing this government.

With the Commonwealth as first respondent, Roxon tried to pay off Ashby with $50,000 of taxpayers’ money. It didn’t work. Ashby didn’t go away and Slipper, despite Labor’s embarrassing support of him, felt the steel of two Independents. Roxon was also responsible for secreting Gillard’s Slater & Gordon file.

Shorten stopped the AWU preferring charges in the Wilson/Gillard scandal and tried to shut down the Craig Thomson HSU scandal by sequestrating the union. That didn’t work. Police have now charged Thomson’s boss Williamson with obstructing. Charges of union fraud involving $20 million of members’ funds are pending.

Even Shorten’s AWU band-aid has fallen off and the boil is weeping pus. Nothing has worked and it’s time to save the furniture but second hand furniture isn’t worth much.

What is the point of papering over the cracks when Gillard makes inane decisions, first to support Thomson and then Slipper?

Gillard’s lack of political judgment is equalled only by those who put her there. Her sexist diversion has run its course, her incompetent advisers have shown their worth and the public is fed up to the back teeth with her incompetent handbag brigade. A look of resignation has swept the front bench as the Gillard experiment is about to be confined to history books.

An Abbott Government will need a strong and effective Opposition. For that to happen Gillard needs to go but Caucus is caught between a rock and a hard place. The choice is agonising. Retain a defiant Gillard and suffer electoral obliteration, which no sane person wants, or flick her and suffer an early election.

With the accident-prone Gillard gone, an early election is almost certain but at least Labor would be able to hit the hustings without her.

That’s a critical plus for Labor and it’s one it must embrace quickly.

If Australia is now to be purged of a corrupt government, we can thank the dogged resolve of Michael Smith and Hedley Thomas but most of all the honesty of one resolute AWU Official whose life is in tatters because he refused to accept the theft of his members’ funds, Bob Kernohan.

THE TERMINAL TOUCH OF McTERNAN