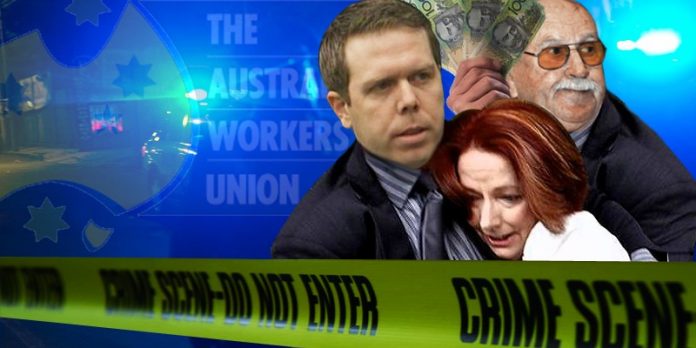 Julia Gillard was in tears when she called Bruce Wilson to tell him she had been sacked from Slater & Gordon.

The $17,000.00 spent at Town Mode Fashions had nothing to do with fashion. Town Mode Fashions was owned by a Greek builder. The very same builder who was performing the renovations! Yet another amateurish attempt by Bonny and Clyde to hide the source and terminus of the stolen funds.

When the Town Mode Fashions money ran out the Greek renovator innocently sent the invoices to the AWU head office. Union bosses demanded to know what the hell was going on. It didn’t take them long to link Slater & Gordon to the scam.

One phone call and the game was up for Gillard and Wilson.

Slater & Gordon’s Peter Gordon suggested Gillard resign but made it very clear she was going, one way or the other. He was not so concerned at what she had done but he needed to immediately distance the already tainted Slater & Gordon from yet another looming scandal.

The AWU was a major client of Slater & Gordon and it was clear that Gillard and another in-house lawyer and Partner, Bernard Murphy, had facilitated the theft of AWU funds. Murphy soon thereafter relocated to work for the other Left wing law firm, Maurice Blackburn.

Gillard later, as Prime Minister, was to reward Murphy’s assistance in the fraud with an appointment to Judge of the Federal Court. He remains there.

Wilson was worried. He suggested to Julia they get away for a while to regroup at their regular haunt, The Grand Hotel in Healesville. They spent a week there hatching a plan to credibly deny the fraud. But those denials were to become anything but credible.

Wilson used either the Healesville Hotel or the Grand Promenade at Lorne for his regular dirty weekends. Unknown to Julia the weekends often excluded her.

After they returned from Healesville, Gillard remained unemployed for six months. She never again worked in law. Wilson scarpered back to Perth to his waiting wife and two boys.

"Big Bill" Ludwig ruled Canberra with an iron fist from Queensland and no-one, including ALP Prime Ministers, dared fart without his permission. Except Kevin Rudd.

His initial disdain for Gillard waned in the wake of his hatred for the factionless Rudd and he later endorsed her Prime Ministership.

It was now clear that possibly millions in union funds had been stolen. Ludwig flew into a blind rage. He and AWU boss Ian Cambridge immediately called in the cops, sacked Slater & Gordon and called for a Royal Commission.

Kernohan’s protege Bill Shorten insisted the investigation be closed down. "Public exposure to AWU files will mean we are all stuffed", he declared. "Bill Ludwig will be finished!" Shorten and others knew that Ludwig himself had had his fingers in the till for years.

Union corruption was rife. The millions rorted from HSU (East) and AWU members were just the tip of the iceberg.

Discovery was only ever accidental.

Shorten was later to become National Secretary of the AWU and an expert in closing down police enquiries into unions. The police in this case were unable to continue without further information and they weren’t getting it from union bosses.

Enter Paul (Piggy) Howes, current AWU National Secretary. "This is an isolated case", he says. "We have zero tolerance for union corruption." Ok Piggy, you have blatantly lied before. Let’s see if you are lying again now.

Hand over the files. Your "zero tolerance" will assist in recovering your members’ stolen funds… but it will destroy your friends and devastate your union. Your call, Piggy.

What’s it to be? Show us who you really act for, you bloated bastard?

Part V discloses Slater & Gordon’s conflict of interest and the report being prepared for the Law Institute. How the AWU is still refusing to make any attempt to chase their members’ stolen funds despite a Court Order that monies be returned.

The young and naive Julia knew of Wilson’s marriage to a Swiss Italian girl in Perth and his two boys. Had Wilson promised to divorce his wife for Julia? Why Wilson finishes up broke and friendless.

WHAT TANNER WOULD REALLY LIKE TO TELL YOU, BUT CAN’T

Word and trivia champ for 2015