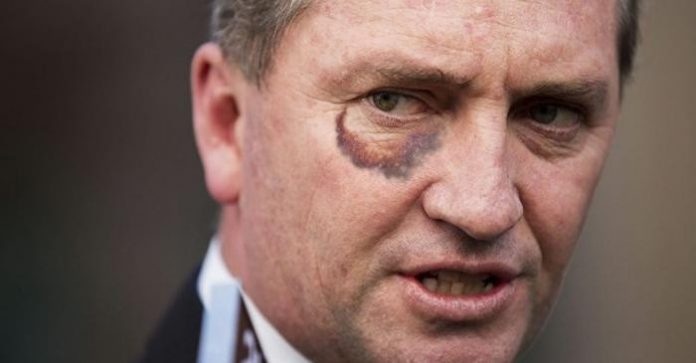 Those poor little feminist shrinking violets apparently have no part in extra marital funny games! Really? They hardly get a mention and are never the focus of the female-dominated Press scrums. Oh no, Press scrums only show interest in the bloke.

Why are Canberra sheilas who target married men not to be blamed? And why should they always be believed when accusations of sexual harassment surface? Bloody hell the game has changed since I was a mad rooter!

Where was the Press scrum when Julia Gillard targeted married men who left their wives and kids? There was more interest in Craig Emerson who drank the contact lenses that Julia had left in a glass of water in her bathroom.

Where was the criticism when she targeted Bruce Wilson and others who dumped their wives and children?

Why kid ourselves? Women can play the sexually aggressive role better than men. If a sheila wants to bonk a bloke she will know exactly how to get there and the bloke will have very little or no defence.

Somehow wily females are able to get a bloke exactly where they want him… in a compromising position with no avenue of escape.

And married men are a wonderful catch because women love to have it over other women. They revel in the competitive thought of, “how good am I?… I am clearly a better bonk because now he chooses to be with me and not her!”

I’ve had it done to me and I can tell you it doesn’t feel too good the next morning, but I’m only a bloke and blokes can never reasonably or successfully claim sexual harassment.

Back in my busy media days I had a female manager. I always made it clear that I didn’t play around with staff. She was attractive and very competent but she always stood closer to you than needed and changed in the office with the door open.

Anyway, she had booked me for a function in Perth that didn’t finish until around 1pm and we were late arriving so we went straight from the airport to the function. And eventually we both struggled back to the hotel in a cab, well and truly pissed.

She had always reserved separate rooms but on this occasion there was only one room. “Where’s your room”, I asked, and I got this convoluted response about all these conventions in town and there was a shortage of accommodation. “That’s crap”, I thought.

I slumped on the one king-sized bed and rolled a smoke thinking if I let this happen I am likely to lose an excellent manager. Then she returned from the bathroom in the world’s sexiest blue see-through negligee. “I’ll sleep well over on this side and you can take the other side, okay?”, she said.

Well, there was no way I was sleeping on the floor and after about five minutes some spidery fingers were exploring somewhere below my stomach, and the rest is history.

To be honest she was magnificent and no red-blooded bloke could possibly have resisted.

Fred Nile would have had no chance and the next morning the Pope would have been sitting on the other side of the confessional.

Anyway when we arrived back in Sydney things were different. She was more familiar and took more liberties. She was later into work and later back from lunch.

I never told my wife about Perth and now my manager was turning up at my home on weekends for obscure reasons and was making friends with my wife and playing with my kids. This was not working.

And it didn’t work, within the month and after a few arguments we agreed to part company.

When I saw her a few weeks later she was managing/dating West Indies cricketer, Viv Richards, and I was still interviewing applicants for a new manager… blokes this time.

I was angry because I had just lost the best manager I ever had, but I never considered reparation or complaining to anyone, after all I was a bloody bloke!

This sort of female sexual predation goes on all the time and I’m sure a few blokes here on PP could cite an instance or two. But if the positions were reversed there could be serious penalties involved.

So all those middle-aged women crying foul on Barnaby Joyce sound a little hollow to me because we can never know the background to what, if anything, Ms Campion had in mind or had planned.

Male/female interaction is a delightful high-point in social life and to suggest the only predatory species is the male is false. And to suggest domestic violence is the sole domain of the male is also false.

Look, blokes are born to chase sheilas and sheilas run fast enough to escape or slow enough to be caught. And sometimes they will turn around and chase you!

I’m too old to care anymore but it would be nice if we could return to the old days without this butch, feminist anti-male bullshit,

…because they must know by now that a game of stinky finger can never equal the real thing!

[Sorry no pics, I forgot to take my camera.]

SHEILAS SHOULD STOP THE BULLSHIT