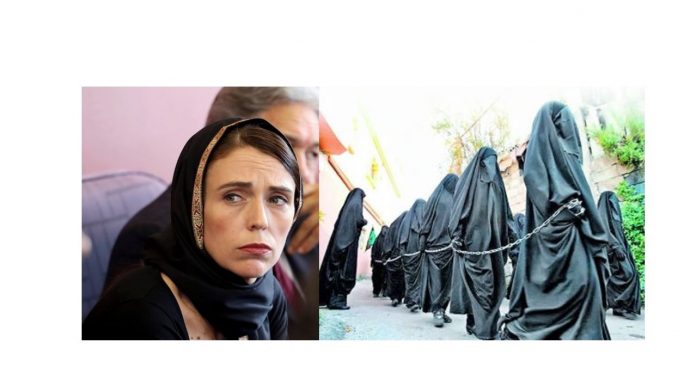 Jacinda Ardern has been praised by millions around the world since the Christchurch shooting for her handling of the situation.

It was entirely appropriate that she should articulate great sympathy for the victims and their families. She did this well. No one would have expected less.

However, her response went much further. Jacinda and her Government engaged in behaviour which bordered on fawning sycophancy.

Without any hint of irony, she donned the hijab, a symbol of female oppression for millions of Muslim women.

Whilst she said of the Muslims, “they are us,” her actions hinted strongly that, “We will become them.” She even had the Islamic prayers broadcast around New Zealand.

At the same time as Jacinda Ardern was being applauded for her compassionate response to the tragic events in Christchurch, I was being vilified.

My crime was to point out the obvious fact that this event was a tragic, but inevitable consequence of mass immigration.

It is a well-documented fact that multicultural nations are far more likely to suffer inter-ethnic stife relative to a nation with a homogenous population.

The immigration policy which the New Zealand Government has imposed on its people is bound to lead to increased conflict of a most serious nature.

The situation in New Zealand was unusual however. The first major incidence of serious inter-ethnic violence was perpetrated by a member of the traditional majority. This evil perpetrator attacked Muslims who are currently a minority.

This played right into the Left-wing narrative that all white people are potentially dangerous Nazis. This is a lie of course. Brenton Tarrant acted alone. He has little support outside of a few deranged idiots who infest any society on Earth.

That hasn’t stopped political and media elites from taking advantage of this situation, to promote the “Europeans as oppressors and Muslims as victims” narrative for all it is worth.

Unlike Jacinda Ardern however, I have read and understand enough Islamic texts to know what it is about. That is not to say that all Muslims are bad people.

However, Islam encourages, or even demands, that Muslims act in ways which are entirely incompatible with Western laws and values. This is not an extreme interpretation of these texts.

After the Satanic Verses affair, Cat Stevens explained that under Islamic Law, Salman Rushdie should be killed for blasphemy.

No learned Islamic scholar disputed this belief. They could not easily have done so without twisting the words of the Prophet and 1400 years of consistent Islamic Jurisprudence.

More recently, a girl named Asia Bibi was convicted of blasphemy in Pakistan and sentenced to death for her crime.

This ruling was upheld by the High Court. She was also badly beaten by her neighbours on the basis of this accusation.

Two senior politicians were assassinated simply for trying to help her. Whilst in prison, she had to be kept in solitary confinement to prevent the other inmates from killing her.

500 Muslim clerics forbade their parishioners from sending condolences for the death of these politicians.

There were riots and demonstrations around Pakistan. Baying mobs were screaming for Asia’s death. According to one survey, 10 million Pakistani Muslims were willing to kill her personally.

Brenton Tarrant’s crime was a terrible one. However, he acted alone. He was universally condemned by all sane and decent people in Australia and New Zealand including myself.

It is inconceivable that a Christian faith leader would side with Brenton Tarrant, even if his victims had blasphemed Jesus.

So far, Muslims in New Zealand have not been involved in such violent and anti-social behaviour as those in Pakistan.

I understand that many people wish to give them the benefit of the doubt. However, I believe that this is a dangerous course of action. Many other countries have been in a similar situation.

They have experienced small numbers of Muslims entering the country. These Muslims were quiet and caused no problems. As their numbers increased however, their behaviour has become increasingly aggressive and threatening.

In the United Kingdom, Muslims were barely noticed until a few years ago. Now however, the country has over 100 Sharia courts. It has experienced numerous terror attacks and untold attempted attacks and bombings.

The British Government is terrified of upsetting Muslims in case they are faced with organised communal violence and rioting.

They recently refused Asia Bibi asylum. It was reported that this was “because of fear it would prompt “unrest” in the UK and attacks on embassies,”

I believe that the increasing Islamic immigration into New Zealand will lead to the same situation there. I believe that in the future, the New Zealand Government will also find itself being forced to grovel to Islamic community leaders in the hope of avoiding violence and terror.

That is why I spoke out in the wake of the Christchurch bombings. It wasn’t a popular message. Whilst Jacinda Ardern was lapping up the adoration of millions, Winston Peters was denouncing me as a “moron” and many others had far worse things to say.

These included numerous death threats and a bounty on my head.

The universal consensus amongst our elites and media commentators was that I was, to put it politely, misguided. I wish, for the sake of New Zealanders, that they were right.

Sadly, they are not. These elitists are either delusional – or wilfully blind. This fact has been proven rather sooner than anyone expected.

The New Zealand Police have shut down numerous ANZAC services this year for fear of reprisal attacks by Muslim fanatics in New Zealand. It is these fanatics I was referring to in my statement after the Christchurch attack.

Despite the tiny number of Muslims in New Zealand, proud Kiwis will be forced to cower at home on the day when they should be out with their brothers remembering the sacrifices of their fallen ancestors.

Those heroes fell whilst fighting an expansionist Islamic Caliphate. They died defending Western people, our Western culture and our Western values.

After the lone crazed gun attack in Christchurch, Turkey’s President threatened to send Aussies and Kiwis “home in caskets.” Where was the outrage from the Islamic world over that outburst? Why did Muslim leaders not condemn him?

The people of the Western World need to wake up and investigate the teachings of Islam. It is not “just another religion” as many assume. There is a reason why so many Muslims resort to insane, homicidal attacks in the name of their religion.

The words “Allahu Akbar” are repeated several times in the Muslim prayer. Observant Muslims recite this prayer five times a day. It is not a coincidence that Muslim Jihadists use this cry, prior to their murderous attacks.

It means “Allah is Greater.” This phrase was used by The Prophet Mohammed prior to his own Jihadist attacks against infidels.

It is no coincidence either, that the phrase “None has the right to be worshipped but you [Allah],” is also included in the prayer.

Under Sharia Law, no Muslim has the right to not worship Allah. Those who leave the religion face the death penalty, often by beheading.

The truth is, that Islam contains an aggressively violent, expansionist political system which is wrapped in a veneer of religious belief.

It is based on the teachings of a 7th Century, desert warlord. It has no place in a modern civilised society.

Anyone who tells you different is either ignorant of the true teachings of Islam or else they are engaged in a dangerous delusion.

Do not listen to those people. I urge you to take the time to investigate the Islamic teachings yourself. The information is freely available online. Our entire civilisation could depend on citizens like you, learning the truth.

If re-elected, I will be fighting tirelessly to increase knowledge of Islam across all sectors of our society. I strongly believe that it is the most critical issue of our time.

No other political party in Australia has been prepared to speak out on this issue. That is why I have taken the extraordinary step of registering my own party.

I am currently selecting candidates who are knowledgeable about this issue and who have the courage to challenge the status quo.

I have achieved my goal and given the people of Australia the chance to have a say on this issue at the upcoming election.

For the simplest and most interesting way to become acquainted with the Islamic religion. The Richardson Post recommends Harry Richardson’s bestselling book “The Story of Mohammed Islam Unveiled” Once you read this book, you will never look at the world in the same way ever again. Harry has offered US$1000.00 to the first person to prove it wrong. 30,000 copies later, no one has even tried.

To purchase a hard copy in Australia for just $13.00 posted, email Harry at harryyo@gmail.com

To purchase a Kindle or a hard copy on Amazon.com click HERE

SEE OUR ARTICLE ON HOW TO VOTE TO MAKE YOUR PREFERENCES COUNT. THE ARTICLE IS ABOVE THIS ONE ON THE HOME PAGE. CLICK HERE TO GO STRAIGHT TO IT.