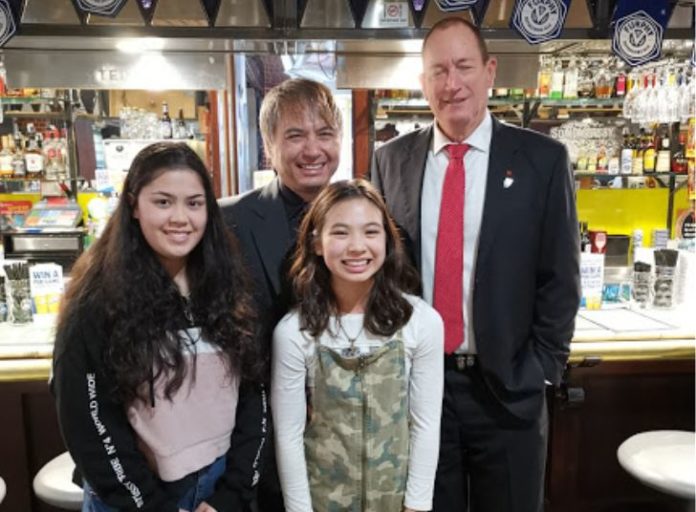 One of the most inspiring things about starting up the Conservative National Party has been the pleasure of meeting some exceptional Australians who were prepared to stand up for our Nation and our People.

Adrian David Cheok was an outstanding example of the calibre of the candidates I fielded. Adrian is a technology genius who has been responsible for some incredible research.

This research has been responsible for powering Australian battlefield systems, Google Maps and even platforms like Instagram and Snapchat.

His contribution to these fields has been so outstanding that he was awarded a Member of the Order of Australia (AM) award.

Sadly, the press, led by News Corp and Channel 7, but now with The Guardian as the main protagonist, are demanding that Adrian’s award should stripped from him, simply because he ran as a candidate for the Conservative National Party.

These publications are prepared to stoop into the gutter at any opportunity. To give an example of how low these people will go, Adrian co-authored a book around 10 years ago in London. This was a serious academic book which was published by a serious academic publisher.

The subject of the book was an exploration of the potential ramifications, ethical or otherwise, of future romantic or sexual relationships that people might have with robots when technology is advanced enough to make them close to indistinguishable from humans.

The gutter press have now smeared Adrian as “Robot Sex Man,” and are writing hit piece after hit piece, trying to bring him down, and silence him.

Adrian always stands up for what is right, and the political principles of our party, no matter how politically incorrect they may be.

They (especially fellow academics) are also criticizing him for his “rudeness” in attacking his left-wing critics on Twitter, as if political correctness and politeness is a precondition for being a Professor and being given the Award.

As possibly one of my last significant acts as Federal Australian Senator, I have written to the Queen and the Governor General to present the following reasons why they should absolutely not cave in, to the demands of these twisted, hateful journalists.

Adrian is greatly deserving of this award. He is a distinguished scientist.  His research in augmented reality and wearable computing was pivotal in providing the fundamental algorithms which provide the ability for frontline troops in the Australian Armed Forces, as well as allied forces, to access enhanced battlefield information.

The same research and algorithms then helped to power such everyday applications as Google maps and Instagram. This was only a small part of his academic output which continues to this day.

The reason for this attack has nothing to do with Adrian’s achievements and outstanding contribution to our nation in the field of science. Instead, it is entirely due to his political associations. Specifically, Adrian decided to run for high office as a member of The Conservative National Party, which is the political party that I lead.

It may seem as though I am simply defending one of my own, but this is not the case. What is important here are principles that I would defend, regardless of who was involved. Government should not discriminate on the basis of political conviction. This principle underpins our British-derived, liberal democratic traditions.

My political party, the Conservative National Party, is registered with the Australian Electoral Commission. It is a legitimate and bona fide political party. It has no association with, and has never endorsed or promoted, any violent group or action.

The Conservative National Party in no way seeks to undermine the democratic process. If anything, we seek to strengthen the foundations of our British heritage and the system it has produced. This is not relevant, however, to the issue at hand.

The democratic system of Great Britain and Australia is predicated on the notion that all citizens have the right to hold and to express, an opinion on how best to make our laws.

It matters not how unpopular this opinion may be. Simply put, a person should never face punishment from the Government for their political beliefs. To do so is unconstitutional.

This right is reserved for leaders of despotic and tyrannical regimes. That is why this is a bedrock principle of our Westminster traditions.

If Adrian David Cheok is refused an award for his enormously important contribution to civic society, simply because of his political persuasion, it will be a form of Government punishment every bit as real as a fine, a suspended sentence or an actual custodial sentence.

This punishment will be imposed not by the Parliament, nor even by the Judiciary. It will be imposed by Australia’s Governor General as a direct representative of our Monarch and the head of State.

This would send a signal, and set a precedent of the worst kind, to appease people for whom there is no appeasement.

The press are relentless in their pursuit of those of whom they disapprove, or who stand in the way of their own personal sensibilities or career advancement.

I myself have faced these attacks on a daily basis. I have suffered verbal and physical abuse as well as threats of the most serious nature. I accept this for myself. I knew the reaction my views would generate, and I aired them with full knowledge of the consequences. Adrian is, however, much younger than I am and has a stellar career in front of him.

He is Founder and Director of the Mixed Reality Lab, Singapore. He was formerly Professor of Pervasive Computing, University of London, Full Professor at Keio University, Graduate School of Media Design and Associate Professor in the National University of Singapore.

He is all of these things and much more. He is, in fact, one of the most inspirational people I have ever met. I was honoured to have him stand as a candidate for my party.

Adrian’s Chinese father and Greek mother emigrated to Australia for a better life. Adrian wishes to preserve the character of this nation which so attracted his parents. He believes this should be done through a change to our immigration intake.

He further believes that even though he is not of Anglo extraction, his interests and those of other Australians would be best served by preserving a predominantly European ethnic and cultural mix.

These are reasonable and non-violent political views. Adrian should not be persecuted by the Head of State for these, or for any other legitimate political opinions.

This issue deserves the most careful consideration. I have implored the Queen and the Governor General not to allow their authority to be used as a tool to achieve the political goals of an intolerant and powerful sector of our society. Adrian Cheok should not be punished for his political views by having this prestigious honour withdrawn.

To do so would open the door to endless political campaigns and the targeting of award recipients with political opinions of any persuasion by vocal minorities on all sides.

To acquiesce to this demand, would be to open a Pandora’s box of potentially devastating, unintended consequences of a magnitude we cannot predict.

I am sure that the Queen and the Governor General are decent and reasonable people who will refuse to participate in this attack on such an upstanding citizen.

However, if any of you wish to contact the Governor General, the Queen, your Federal Member or either News Limited or The Guardian to support Adrian’s case, I know he would be most grateful.