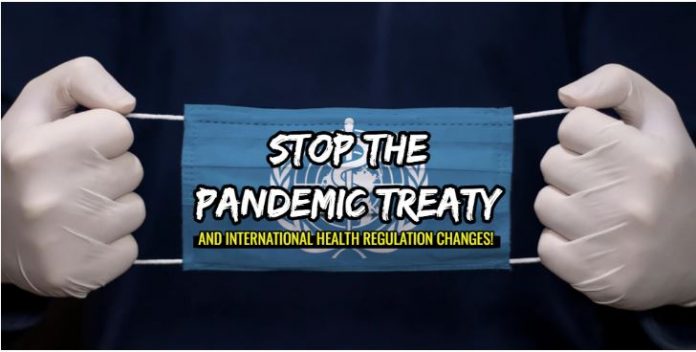 It seems there’s a never-ending array of threats to our national sovereignty and personal freedoms these days and yet another one has emerged: the World Health Organization’s proposed Pandemic Treaty and impending International Health Regulation Changes.

Firstly, I am sending this email earlier than normal because I will be busy on Saturday (which is polling day in Australia), but more so because of the urgency of the matter at hand.

I saw many emails and information coming to me about the Pandemic Treaty and proposed International Health Regulation changes but was sceptical until I did my own research. That’s when I realised this was serious and could cost us both our national sovereignty and personal freedoms.

The move is afoot to give the Director General of the World Health Organization (WHO) power to declare a pandemic in any country and essentially ensure that the WHO rules are complied with by that country.

These rules — the International Health Regulations — could enable worse restrictions than what we suffered under over the past two years. According to research done by Pauline Hanson’s One Nation, measures specifically provided for in the regulations include:

Regulations are in place for as long as WHO decides is necessary. They can declare a pandemic without justifying or even publishing their reasons. There is no appeal, no transparency, no fairness.

As a result, I arranged an urgent podcast interview with the knowledgeable Senator Malcolm Roberts of Pauline Hanson’s One Nation on this matter along with other threats to our freedom and privacy including the Digital Identity agenda and the World Economic Forum’s Great Reset.

You can find that podcast by clicking here:

While the globalist’s plans for control and profiteering are reaching a crescendo, it is important to remember that treaties and the like can only impact a sovereign people if State and Federal governments enables it.

Research that I personally had commissioned on this matter reminded me that:

“… it is important to keep in mind that International law and forums such as this are only binding to the extent that State parties are willingly compliant. That is, it will be in the hands of State Parties to enshrine in domestic legislation any changes like this for them to have any real effect.”

This is why it is important now for you to do two things:

Can I count on you to sign the petition to the Prime Minister and vote for freedom? If so, go to www.georgechristensen.com.au/treaty or click the link below:

Your election night coverage is covered!

On election night (Saturday, 21 May), I invite you to join me on The Good Sauce which is hosting your election night coverage as results begin rolling in from close of polls at 6pm (AEST).

We will review the journey to #AusVotes since the last election and be watching the freedom party candidates closely as results begin being reported. We’ll let you know which seats are likely to fall and predict the outcome for government, as well as the probable makeup of the crucially important cross benches in both the House of Representatives and the Senate.

Your comments will be included live! Invite your friends around for a BBQ or watch party, use #FreedomSpeaks to share online, and let’s celebrate the ground we take as the Quiet Australians shake off the shackles off tyranny.

To view this coverage, set a reminder to watch the YouTube livestream from 6pm on Saturday, 21 May:

As always, God bless you, your family and our nation.

And stay tuned! I will be bringing you some really exciting news after the election.

This article first appeared in firstnationsubstack.com