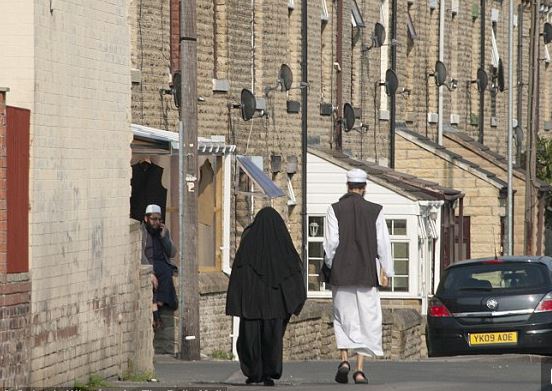 Dewsbury is a typical Yorkshire mill town, perched on the side of an unexpectedly steep Dale. Many of the streets are cobbled, and are lined with grey terraced houses (all joined on both sides in a long row) with blue/grey slate roofs.

I have only been there once, back in the very early Eighties when I was badly misspending my youth. Pinky asked me if I would take her over and offered to pay the petrol for my motorbike.

It was a summer afternoon and it was a nice blast across the Pennine Hills, so I was happy to oblige. I also liked Pinky at that stage. She was a bit of an odd character being a black, lesbian, Rastafarian with long dreadlocks (I’m not kidding here).

She was slim and wiry, and looked quite boyish, but was fun and we kind of clicked and hung out a bit in those days (before things went very sour – but that’s another story).

“Just taak me ova’ thar ta see me Mum” she asked in her thick Yorkshire accent. She had a helmet fortunately, as my spare would have never fitted over her dreadlocks.

The bike was quite a rarity. It was a Kawasaki S2 350cc two stroke triple. Totally unsophisticated and with 3 expansion chambers, it sounded and acted like a bunch of rabid chainsaws on steroids.

I’d fitted it with a full race fairing off a TZ700 Yamaha which I had picked up cheap and had it sprayed up in bright fire engine red (what other colour is there?).

It was completely mental and great fun when it held together which, fortunately, on this occasion it did. Going up the steep Dewsbury streets two up, the biggest challenge was keeping the front wheel on the ground.

We saw Pinky’s Mum and had a couple of cups of tea to thaw out. Pinky’s Mum was a typical mill girl who must have fallen for one of the West Indians who had flooded into the UK after the war.

He was long since gone but her Mum was still there and was very friendly and helpful. Pinky offered to buy tea (that’s dinner to most of you) from the local chippy.

I went in with her and ordered a pie and chips. The guy behind the counter looked at me like I had two heads.

“We ayn’t got no pois” he said slowly and quizzically.

“Er.. how about pudding and chips?” I replied hopefully (a pudding was much like a pie but with softer pastry).

“Naah, we ayn’t got them neither,” he informed me.

It turned out, they only sold fish and chips, which came wrapped in newspaper with lashings of brown chippy vinegar.

It took just one bite into the battered fish to realise why they didn’t sell anything else. That was far and away the tenderest, juiciest and tastiest fish I’ve ever had in my life.

My stomach was still glowing an hour later as we crested Windy Hill and began hurtling back down the M62 towards Manchester.

It still makes my mouth water to this day just thinking about it.

That’s the memory I have of Dewsbury, but those days apparently, are long since gone. One of the suburbs of Dewsbury is called Savile Town and it is now possibly the most diverse area in England.

Of 4033 residents polled in the 2011 census, just 48 of them were indigenous English. In other words, little more than 1% of the residents in the town were English.

The rest were almost entirely Pakistani Muslims. Now just imagine if those 48 residents were so racist that they didn’t want their teenage daughters being pimped out as sex slaves and have moved out of the area since the 2011 census.

Voila – every single person in the town a Pakistani Muslim – 100% diversity and the most ethnically homogenous town in England. All it took was a highly effective program of ethnic cleansing.

“The Iconoclast” takes up the story in the following Youtube video. The enrichment will take your breath away.

Are Recent Reports of COVID Surges an Attempt to Suppress In-Person...