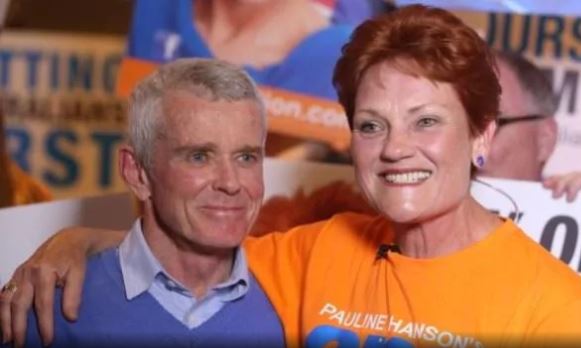 Regular readers probably realise that I haven’t been a big supporter of One Nation, particularly this time around. I had very low expectations when they were elected, but still managed to overestimate them.

However, a couple of weeks ago, they put up a vote in the Senate on whether to give citizens a vote on immigration, In doing so, Pauline and Malcolm did us a real solid favour.

The problem with politicians is that when they get into Parliament they change. I’m not sure what they put in the water in that place but whatever it is, it has a devastating effect on the truth glands.

Pauline has been no exception. Up until now, she has squandered the opportunity given her by the voters, favouring career stability over a chance to make a real difference.

Unfortunately, successful politicians are like weather vanes – they point the way the political wind blows. Those who don’t, are not successful.

Our job then, is to create the wind. It would be nice to think that the light breeze emanating from the Richardson Post has helped put some wind in their sails.

Maybe having Malcolm back has helped to steel her spine. Maybe it is Mark Latham’s influence. He is doing great work calling out Gary Burns and the NSW Anti-Discrimination Board.

Whatever the reason, Pauline’s vote in the Senate for a plebiscite on immigration was a huge favour to the people of Australia.

It showed us all, that our leaders (and their leaders) have absolutely no intention of allowing the lumpenproletariat to have a say over who gets to have political power in this country (by being gifted citizenship in in the hundreds of thousands).

For those who weren’t paying attention, John Howard spelled it out when he was the head of this particular den of iniquity. “We’ll decide who comes here,” he declared. Do I need to translate?

Voting on PHON’s resolution, the Senate reiterated this sentiment. “We’ll decide who comes here,” they said. Every single Senator except for Pauline and Malcolm voted against the motion.

The Liberals were strident in defence of their position.

Before the election, Scott Morrison had promised that the migration intake would be cut from 190,000 to 160,000 as part of the government’s “congestion-busting” approach.

She didn’t bother backing up her rhetoric by producing detailed figures, mapping, projections or other tiresome stuff.

I mean, just because this is such a crucial issue, we shouldn’t actually expect these clowns to take it seriously. After all, it’s not like they were discussing their pension increases or anything.

Kudos to Pauline and Malcolm, however. They shied away from addressing the makeup of the intake unfortunately.

Just putting up this issue for a vote however, forced every other politician to nail their colours to the mast and show the level of contempt they have for the chumps who pay their salaries.

We had to vote Liberal in the lower house at the last election, but for those of you who voted Liberal in the Senate, congratulations. At least the wrong globalist puppets didn’t get in.

Guy Fawkes must be burning in his grave.