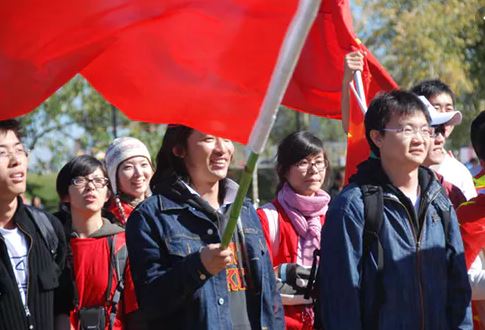 Our poor old press are flummoxed. The Left Wing contingent (which is pretty much all of it) don’t know what to make of the situation. It just doesn’t gel with their sacred mantra:

OK, Big Brother actually said “Ignorance is Strength” but in 1948, George Orwell had no idea that the Left would invent Diversity to help them in their goal to grab power.

But whilst Western students are studying the anonymously penned mantra of “Diversity is our Strength,” Chinese students study the mantras of Sun Tzu.

2500 years ago, the vast Chinese plains were split into small kingdoms. Sun Tzu was a general who wrote a book called “The Art of War.”

There is a famous story attached to this book which goes something like this:

Sun Tzu Wu was a native of the Ch`i State. His ART OF WAR brought him to the notice of He Lu, King of Wu. He Lu said to him: “I have carefully perused your 13 chapters. May I put your theory of managing soldiers to a slight test?”

Sun Tzu replied: “You may.”

He Lu asked: “May the test be applied to women?”

Tzu replied “Yes,” so arrangements were made to bring 180 ladies out of the Palace. Sun Tzu divided them into two companies and placed one of the King’s favourite concubines at the head of each.

He then bade them all take spears in their hands, and addressed them thus: “I presume you know the difference between front and back, right hand and left hand?”

Sun Tzu went on: “When I say, “Eyes front,” you must look straight ahead. When I say, “Left turn,” you must face towards your left hand and so forth.”

Again, the girls agreed, so he set up the halberds and battle-axes in order to begin the drill. Then, to the sound of drums, he gave the order “Right turn.”

But the girls only burst out laughing. Sun Tzu said: “If words of command are not clear and orders are not thoroughly understood, then the general is to blame.”

So, he started drilling them again, and this time gave the order “Left turn,” whereupon the girls once more burst into fits of laughter.

Sun Tzu: then said, “If the general’s orders ARE clear, and the soldiers nevertheless disobey, then it is the fault of their officers.”

So, he ordered the leaders of the two companies to be beheaded. Now the king was watching the scene from the top of a raised pavilion; and when he saw that his favourite concubines were about to be executed, he was greatly alarmed.

He hurriedly sent down the following message: “We are now quite satisfied as to our general’s ability to handle troops. If we are bereft of these two concubines, our meat and drink will lose their savour. It is our wish that they shall not be beheaded.”

Sun Tzu replied: “Having once received His Majesty’s commission to be the general of his forces, there are certain commands of His Majesty which, acting in that capacity, I am unable to accept.”

Accordingly, he had the two leaders beheaded, and straightway installed the pair next in order as leaders. Then, the drum was sounded for the drill once more; and the girls went through all the evolutions.

They turned to the right or to the left, marching ahead or wheeling back, kneeling or standing, with perfect accuracy and precision, not venturing to utter a sound.

Then Sun Tzu sent a messenger to the King saying: “Your soldiers, Sire, are now properly drilled and disciplined, and ready for your majesty’s inspection.

They can be put to any use that their sovereign may desire; bid them go through fire and water, and they will not disobey.”

But the King replied: “Let our general cease drilling and return to camp. As for us, we have no wish to come down and inspect the troops.”

Thereupon Sun Tzu said: “The King is only fond of words and cannot translate them into deeds.”

After this, the King said something along the lines of “I hate your weasel guts, but I want to hire you to run my army for me” (my Mandarin language skills are a little rusty).

Tzu ran the army and conquered lots of other kingdoms providing bulk booty for the happy King who probably wound up with lots of new concubines.

The point to note, is that Chinese leaders have always had a tendency to ruthlessness in pursuit of their goals. The current Chinese Communist Party wiped out around 40 million of their own people a few short years ago and still think they were only 25% wrong.

The Chinese are also extremely capable operators and tend to think generationally. Whether these differences are cultural or genetic is not entirely clear.

However, East Asians have a higher IQ than White European peoples which is unlikely to be caused by culture.

White IQ is currently dropping too, thanks to our leader’s determination to reward stupidity, laziness and lack of foresight with an endless stream of welfare cheques.

Most importantly, there is a massive asymmetry in population. There are around one billion Han Chinese compared to 25 million Australians.

Of these Australians, around 5% are Chinese (and this figure is rising rapidly). Previously, we were far from China and had a huge technological advantage. This is no longer the case. Distances and differences are shrinking fast.

Even more alarming is the level of Chinese nationalism bordering on Supremacism; as showcased in the recent Campus altercations. University staff have been shocked by the level of nationalism displayed by Chinese students.

Clearly, university staff actually believed their own fantasy; that White people are the world’s only nationalists.

For the last few decades, White kids have been indoctrinated into believing that loving one’s country and people is something that only actual Nazis do.

Chinese kids on the other hand have had it drummed into them that the Chinese nation, people and particularly its Government are literally beyond criticism.

Judging by recent events, it seems that some of them will fight tooth and nail for China at the drop of a hat.

So, we have a billion Chinese with complete confidence in their people and their history (however questionable), verses 25 million Aussies who have been conned into believing that they have no right to have their own nation.

Meanwhile, China is flexing its muscles in a big way and America is fast losing primacy in the Pacific region.

This is a very precarious situation indeed, and we need forward thinking leaders with courage and intelligence. We need people with the strategic brilliance (though not the utter ruthlessness) of Sun Tsu. Instead we have ScoMo, Albo and Di Natale.

Oh well, it could be worse, look at what the Kiwis got.