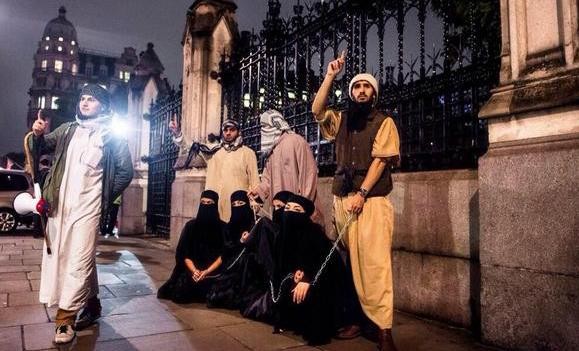 A couple of years ago I made the prediction that within 15 years, Islam will be finished as a force on this planet. At the time I thought this might turn out to be a conservative estimate. I still do.

That is not to say that I think it will be an easy job. I know that it will involve great pain and suffering. It will also require military might to contain Islam.

On its own however, military force will not be enough. The main battle we are fighting is ideological. It is a battle I know well and there have been similar occurrences in recent times from which to draw parallels.

In 1941 the Nazis were bragging about a 1,000 year Reich. They had already conquered most of Western Europe and were headed into North Africa and Russia. It would have been a brave man to predict that by 1950, National Socialism would be an entirely discredited ideology with only a few dysfunctional followers.

In 1980 roughly one third of the world was communist. When I visited Berlin in 1992 there was almost no sign that the Berlin Wall had ever existed.

These ideologies ruled through fear. Once they lost their iron grip, people could see them for the bankrupt ideologies they really were. Once this happened, they deserted in droves.

In the last month or so we have seen a gigantic shift in the perception of Islam. Mainstream journalists and politicians are now insisting that non-Muslims have a right to comment on Islam and discuss its failings.

To our parent’s generation this would have been nothing more than common sense. From where we were just six months ago however, it is a quantum leap.

The importance of this realisation amongst our leaders cannot be underestimated.

Islam prospers by pretending to be something it isn’t. To maintain this deception it intimidates people into thinking they have no right to examine it.

Now that people have realised that they have every right to peer behind the curtain, it won’t be long before they do just that.

As yet, many commentators are still of the opinion that Islam can be reformed. Be prepared to hear much more of this futile discussion.

These people think that because Christianity was reformed, that Islam can be too. What they fail to realise is that Christianity never has been reformed. The Bible today is the same as it was 1600 years ago.

After the Eastern Church was decimated by Islamic Jihad, the Catholic Church was the only Christian institution left standing. The Church was a highly political organisation which worked hard to keep the teachings of Christ under wraps.

It used ignorance of Christianity to promote its own agenda. The Bible, and Church sermons, were all in Latin and treated as closely guarded secrets.

The Church operated as a cult. People were expected to do as they were told. They didn’t know that the instructions they received often contradicted the lessons of the Bible.

With the advent of the printing press, information began to leak out. Thanks to the efforts of insiders such as Luther, the Catholic Church gradually lost its grip on the teachings of Christ. People began reverting back to the original message.

Those wanting to reform Islam wish to stop Muslims from practicing violent Jihad. Unfortunately for would be reformers, Jihad is central to Islamic Doctrine. Muslims engaging in violent Jihad are following their religion to the letter.

Not only that, but Islamic Doctrine is written in a way which makes it virtually impossible to reform. Changing even one strand of Islamic doctrine is a sin known as “bid’ah” or “(religious) innovation.”

This is a very serious matter in Islam. That is why so little attention is paid to contemporary opinions of Islam. The most commonly quoted Koranic commentary is by Ibn Kathir who died around 1300AD.

One of the earliest and most respected Islamic scholars was Al-Tabari. On his deathbed, he was asked if he could forgive his enemies. “I can forgive all of them” he replied, “except for those who called me an innovator” For those who still think Islam can be reformed, a Google search of the word “bid’ah should be all that is required to cure their fantasy.

Whichever way you slice and dice it, the unfortunate truth is that Islam promotes violent conquest. It does this as a way of expanding its reach. There is also no way to reform Islam.

There may be long periods where Islam is relatively peaceful. This invariably occurs when Islam is not powerful. That is the moderate kind of Islam we have had since the end of WW1 when Islam was crushed militarily. As Islam grows in numbers and power however, violence will follow as surely as night follows day.

The only way to prevent this is to convince Muslims to convert to another religion or, if they prefer, to abandon religion altogether.

This may sound like an almost impossible goal but I don’t think it is. All it will take is for the people of the non-Muslim world to stand as one and insist that Islam is evil.

We need to make it clear that Islam is the source of the Islamic world’s problems. We must be clear that it is the product of a medieval Arab bandit and his narcissistic wish to rule the world.

Islam is indefensible in rational debate. When Islamic leaders cannot refute these claims, Muslims will have their faith shattered.

They are born and raised to believe that they are the best of people and that their “Ummah” (the Islamic nation) is the best of all nations.

They are also raised to believe that they must never question this assumption. When Islam is shown to be little more than a self-serving bandit creed, Muslims will lose faith rapidly. Within a very short timeframe the whole thing will collapse.

Muslims will then finally be free to begin pursuing life, love and happiness in this life rather than the next. The benefits to all of humanity, as well as our environment will be immense.

What currently stands in the way of this process is the bizarre belief system of our own leaders and academics. It is a belief system known as moral relativism.

This dogma tells us that all religions and cultures are as good as each other. At least that is what it pretends to say. In actual fact, it believes that Western Judeo-Christian culture is inferior to all others.

That is why our leaders believe that flooding Western countries with migrants from other cultures will “enrich” and strengthen us (diversity is strength!).

Islam is a supremacist ideology. It believes in the oppression of women and non believers. It encourages slavery, violence, theft, murder and cultural destruction just to name a few.

How can any sane person believe that such a culture is equal to, or better than our liberal Western democratic culture? Western culture has driven the greatest improvement in the human situation in the history of ever.

Like all people who believe in illogical dogma however, our leaders defend it aggressively. Anyone challenging their beliefs is attacked mercilessly.

They are denounced as racists and Nazi extremists. These unfortunates may lose their jobs, face prosecution or be attacked by violent mobs of extreme left wing radicals.

This is why they will resist this option until all others are exhausted. They will cling to the fantasy that Islam can be reformed as if their lives depended on it.

There is a silver lining to this situation. Extreme Islamic violence will not only expose the hypocrisy of Islamic dogma. It will also force us to realise that neither Islam nor moral relativism need reform.

Instead, we need to throw both of these ideologies in the dustbin and re-learn the importance of Western culture and values. We also need to realise that this process does not lead to Fascism or white supremicism.

Instead it leads to freedom, economic prosperity and the subjugation of our leaders to the will of “We the People.”

Anyone who cannot mount a spirited and articulate defence of Western values and culture should not be eligible for high office. Neither should they be considered for a teaching position.

In the meantime, there will be a great deal of unnecessary suffering. Muslim men and their victims will die in acts of suicidal violence.

Muslim women will continue to face oppression, violence, mutilation and honour killings. Middle Eastern Christians and Yazidis will continue to be ethnically cleansed from their ancient homelands.

Young Christian and non-Muslim girls will continue to be trafficked as sex slaves in places like Western Syria and Northern England. The people of the Western world will face the humanitarian and economic costs of an escalating Jihadist campaign of mass murder.

Sometime soon, the burden of our leader’s stupidity will be too great to bear. When this time comes, those who promote this ridiculous dogma will be forced from positions of power. They will then be free to seek employment in positions more suited to their intellectual ability.