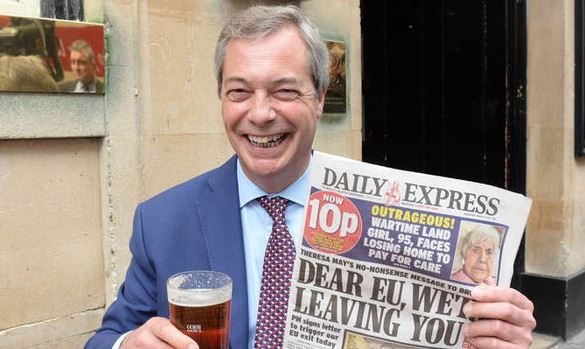 A week is a long time in politics. In Brexit politics, it’s a hell of a long time. As the latest deadline approaches, the Parliament has vowed to tie Boris’s hands behind his back for the coming boxing match with the EU.

MPs have passed a law demanding that BoJo ask for an extension to stay in the EU even longer. Talk about Hotel California? People with nothing to lose can be extremely dangerous however, and this underhanded plotting to keep Britain from leaving could backfire spectacularly.

Nigel Farage is now making serious overtures towards Boris with regards to cooperating in the event of an election. That would definitely put the cat amongst the pigeons.

Farage headed UKIP for years and can be credited more than anyone else with securing the vote to leave the EU.

He recently formed a new political party called The Brexit Party which secured a massive majority in the latest EU elections.

The Brexit party is offering to campaign heavily in Northern Labour strongholds whilst leaving southern, blue-ribbon seats, for the Tories (Conservatives).

This would be a devastating combination, particularly as the remain vote is split between the Liberal Democrats and Labour.

It would also mean most likely, that treacherous remain voting Tories like Hammond and Berkow would be kicked out of the party and have no chance of re-election (Ha!).

The problem right now is that the Government needs a two thirds majority to call an election and with Labour refusing to cooperate, they are stuck – or are they?

One trick they could pull, is to put up a No-confidence motion in Boris which would only require a simple majority to pass.

This would seem like a bizarre move, voting for no confidence in their own leader. It would break the impasse however, as Labour would have to abstain.

We could pretty much guarantee that they would not be able to bring themselves to vote against such a motion.

That would clear the way for an election before the deadline to leave the EU. If Boris won that election, he could pull the plug pretty much immediately.

Britain would then be free to make trade deals with any country in the world – including the European Union.

Donald Trump has offered to fast track a deal with Britain, helping to make it great again too. The American economy is literally going gangbusters under Trump and such a deal would be a godsend.

If Europe persisted in blocking British trade it would have devastating consequences for the remaining EU countries.

Britain is one of the largest economies in Europe and buys lots of their goods. It also contributes a significant proportion of their budget.

Losing both of these forms of income at once would be a crushing blow for Europe and they might just be smart enough to come back to the UK asking for a deal from them.

Somehow, I think in that scenario, the negotiations would be somewhat more favourable to the British.

The Poms been in strife many times in their long history, yet the winds of chance have saved them by the skin of their teeth. Let’s hope their luck holds out this time.