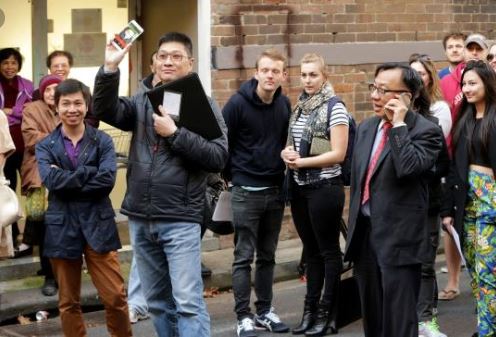 Wow! What kind of next level genius is this guy? More people chasing limited housing supply = dearer houses. Cripes! He should get a degree in economics or something.

Naturally, he is still in favour of high immigration. He thinks the Government should just borrow even more money from his banking cartel to “turbocharge the economy.”

Of course, borrowing billions of dollars to build infrastructure will turbocharge the economy – until we have to pay it back of course.

Then we will find that we, and our children and grandchildren will be in penury thanks to Phil’s banking cartel which printed the money our leaders borrowed.

That’s pretty much what has been happening for decades. From my own observations, it has gone something like this (this isn’t every Aussies story of course but correct me if I’m wrong).

Imagine an ordinary true-blue Aussie bloke, let’s call him Joe Carton (he drinks a bit more than his Seppo counterpart).

Joe lived in a home in Randwick, in Sydney’s Eastern suburbs, left to him by his father. His father was a working-class bloke with a decent job in a factory in nearby Botany. He drove there in his Holden which was built in a factory in Melbourne where Joe’s uncle lives.

Joe went surfing before school and hung out with mates. He hoped to work in a well-paid factory job too. Unfortunately, high taxes and low tariffs pushed most of the manufacturers out of Australia.

Instead, Joe wound up working at the airport unloading bags for the many migrants flooding into the country.

The migrants needed houses. High demand forced the prices up. Fortunately, Joe had his father’s house after he passed so he didn’t need such a high income.

He now had a very valuable house, which should have been a good thing. Unfortunately, the State Labor Government under Bob Carr brought in wealth taxes on high value homes.

Joe’s ordinary working-class home is now worth more than a million, so the Government wants money off Joe for wealth tax.

Some of these high taxes are being sent overseas in foreign aid to countries in the South Pacific such as the (fictional) country of Eblonia.

The money is given to the leaders of Eblonia because the country is so poor that it can’t afford decent roads and hospitals.

Colonel Gwanga, the leader of Eblonia, is very happy with the money. He deposits it in his Swiss bank and buys another Ferrari to replace the one which got wrecked on the countries busted up roads.

He also takes out gigantic loans from Australian banks to help his country’s economy. This money goes into his Swiss bank account too. When the loans come due for repayment, the country has no money to pay.

The banks then persuade the Australian Government to give even more money to Eblonia. Colonel Gwanga takes half this money for himself and uses the other half to pay back the Australian banks.

The banks help finance the Political parties who donate the foreign aid (to help those poor starving Eblonians).

Meanwhile, poor old Joe Carton has had to move out of Randwick and is now living in Burwood which is somewhat cheaper.

The only thing is, that Joe doesn’t feel too much at home in Burwood anymore. The whole suburb has now been swamped by Chinese.

In 2013 only 35% of the Burwood Council area spoke English at home and 30% of the population had arrived within the previous 5 years. It’s probably much worse by now. That’s not immigration, that’s colonisation.

Meanwhile, Colonel Gwanga’s son Tommy has decided to move to Australia. He wants to live in a country with decent roads, schools and hospitals.

He has bought Joes old house and had it renovated. A couple of million is chump change for Tommy Gwanga.

Joe is so hacked off that he decides to vote for Fraser Anning and his Conservative National party. Fraser is the only politician who actually stands for the rights of the traditional Anglo Australians

Scott Morrison and all other politicians are horrified and call Joe a stinking racist. Millions of migrant voters are delighted and vote for Scomo and friends in droves

Phillip Lowe, the Governor of the Reserve Bank of Australia now lives in Randwick (yep, he actually does), probably near to Tommy Gwanga.

He says the Government needs to spend billions more dollars to build transport links so Joe Carton’s kids can get to the beach.

Unfortunately, The Government is already deeply in debt, so to build this infrastructure, they would need to borrow billions of dollars which Phillip Lowe’s banking cartel buddies will print up for us.

The repayments will cripple what remains of Australia’s private industry leaving Joe’s kids with Buckley’s chance of getting jobs, especially as most remaining positions tend to be on the Government payroll.

This is a fictional scenario of course, but that is what I feel is happening to ordinary, everyday, working class Aussies who once owned this nation and had everything to look forward to.

Today, traditional Aussies seem increasingly desperate and marginalised and unable to come to terms with what is happening.

They know deep down that they are getting screwed, but they don’t understand who is doing it. No matter who they vote for, they get treated like third class citizens in their own nations.

Why do our elites not look after our interests? Maybe it’s because someone else is better looking after their interests.

We need to face the fact that our leaders are now more interested in looking after other people who pay them better.

They are so corrupt that they will sell out their own country for a few miserable dollars. We need to acknowledge this and treat them accordingly. Australians deserve to get their country back.