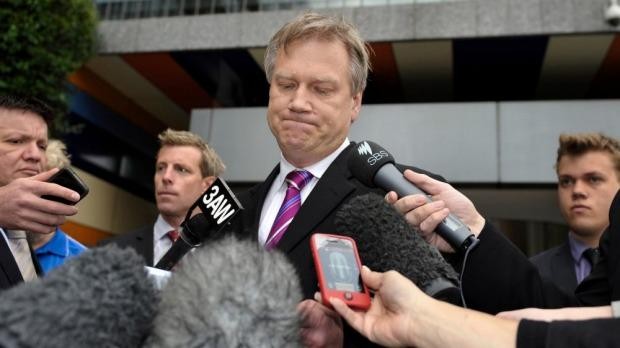 Sometimes, important moments in history can go by almost unnoticed. The Gettysburg address for instance, was barely remarked upon when it was delivered and when a young Austrian by the name of Adolf Hitler had a dust up in a beer hall, few people paid attention.

On Oct 14 2015 AD. Melbourne’s Herald Sun published an article by Andrew Bolt with the rather long-winded title, “We Cannot Pretend as Malcolm Turnbull Does That Islam is as Cheek Turning as Christianity”.

In the article, Bolt explores previously taboo concepts such the fundamental difference between the Islamic and Christian view of violence and conquest.

He also sets out clearly the concept of the Christian “Golden Rule” and explains how Islam doesn’t have one. He quotes correctly and in context from the Bible, the Koran and the Hadith. In short, he validates and endorses the views of the Richardson Post and its readers.

We have long suspected Mr Bolt of being a closet Post reader and he has received a copy of my book. How he came by this knowledge however, is unimportant. The fact is, it was published in a major metropolitan newspaper and this is a very big deal. At the Post, we are individuals who have little to lose and rely largely on our own discretion.

Major newspapers are different. They have a great deal to lose. Everything they publish goes through multiple filters including multi-million dollar legal teams.

Andrew Bolt, more than any other journalist, knows the dangers of provoking the multicultural juggernaut. He narrowly avoided jail after criticising white people who wanted to be considered black.

That these ideas made it through all of  these filters and on to the pages of a major metropolitan newspaper gives them enormous credibility.

The ideas articulated by Bolt are now “in play” in the media and I believe other editors and journalists will soon be taking a serious look at them. My own prediction is that Piers Ackerman of the Daily Telegraph will be the next out of the gate for the same reason as Bolt was first.

While the Left may hate these guys, they can’t dismiss them. Expect to see more and more journalists waking up soon.

This is to be expected and I have always remained convinced that we will win this struggle. The silver bullet which will do the job is information.

Once people understand what we are up against, they will desert the multicultural fantasyland in droves. Not only that, but I believe that Islam will be almost completely eliminated from the planet within a shorter time frame than anyone could imagine.

But (oh God, why is there always a “but”) the question is, at what cost. As Sun Tsu correctly explained, “You should never fight a battle until you have already won it”.

The decisions which we make now will decide how much blood will be spilt, if or when the shooting starts.

On this count, Angela Merkel’s recent directives have cemented her position as one of Germany’s worst ever rulers amongst some incredibly serious competition.You might have thought, given Germany’s recent history that Frau Merkel might have thought twice before importing hordes of violent anti-Semites.

The fact that she didn’t, suggests to me either that she is stupid or that she came under intense pressure we are not aware of. I personally don’t think she is stupid.

I believe our enemies are desperate. They can sense the growing opposition and are now putting enormous pressure on our rulers to dismantle our defences and leave our societies open to rapid stealth takeover.

Many of them see a full scale Jihad ahead. Their aim is to put as many of their compatriots inside our borders as possible.

I am not sure how many Muslims support a full scale ISIS style Jihad, but I have an uncomfortable feeling that the Europeans are about to find out.

As usual, the island geography of the English-speaking world has saved us from the worst. It is pretty hard to get here on a bicycle. Nonetheless, in a world of mass transportation, it only takes one clown up top to give the order and we will be in as much trouble as Europe.

It is important to keep the pressure on our pollies. Don’t be afraid to contact them and let them know your views. If your MP is Labor then tell him you will vote Liberal.

If your MP is a Liberal, you can’t threaten to vote Labor or Green, they will know you are bluffing. Instead, demand that he/she educate themselves about this subject before allowing even more Islamic migrants to come here.

Remind them of the costs of those we have taken so far such as Man Monis, who came here as a refugee.  Farhad Jabar Khalil Mohammad (the Parramatta shooter) probably did too but no journalists seem to think it important enough to mention.

There are of course thousands of genuine Christian and Yazidi refugees in the Middle East. We can’t however ask the Government to bring in non-Muslim refugees only.

Section 116 of the constitution forbids Government from religious discrimination. We can however request that the Government withdraw from treaties which allow the UNHCR to tell us which refugees we must take.

[If you would like to give copies of my book away as Christmas presents I have a special offer on for those wishing to buy 10 copies. Contact me at [email protected] to take advantage.]