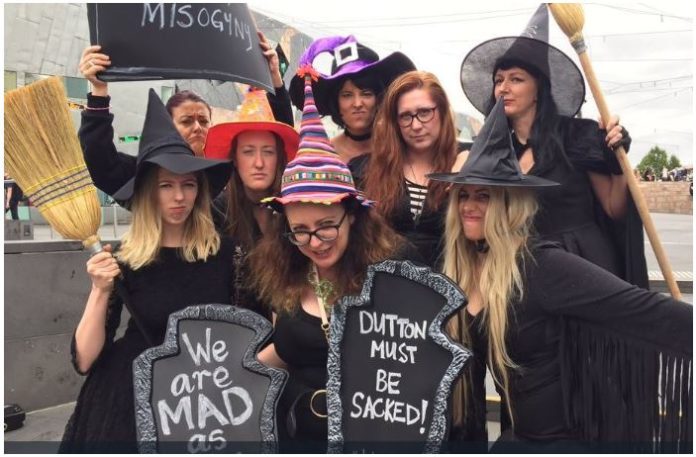 Inspired by our article at the end of last month, our friends at RiteOn picked up a shovel and started digging. The following is the fruit of their labour:

Who are these new-age ‘moralists’ attacking free speech and destroying businesses?

There is a new phenomenon on social media where faceless moral activists target and threaten businesses who advertise on conservative media outlets with whose political views they disagree.  Sleeping Giants and Mad F**king Witches are the new-age bullies of yesteryear – most too afraid to show their faces and too gutless to confidentially argue their alternative opinions!  “Shut up or get shafted” is their modus-operandi and many corporate ‘giants’ are running scared. It is difficult to judge who is the bigger coward!

A recent article by Janet Albrechtson gives us hope that many of us have had enough…and we aren’t going to take it anymore!  Stand up, fight back or surrender our free speech, jobs and futures. (1)

These left-wing grievance groups only attack conservative media outlets such as Sky News, The Australian, The Spectator and Radio 2GB among others. With endless hours wasted attacking others, these new-age-moralists sit in judgement dispensing their own form of social and economic punishment. But fightback is imminent as more people understand the insidious
and discriminatory nature of this motely mob of moralizers!

Who are Sleeping Giants?

Founded in 2016 after President Trump’s victory in the US, by advertising veteran, Matt Rivitz (2) who kept his identity hidden until last July 2018, when he was exposed.

Sleeping Giants claim to have 197,000 Twitter and 59,000 Facebook followers worldwide.  Rivitz urges businesses to stop advertising on any conservative media platforms or outlets that espouse free speech and could make comments that progressives would disagree with.  He argues “advertiser boycotts aren’t about free speech. People can still say whatever they want. This is about business and Sleeping Giants doesn’t force companies to do anything”

SG social media campaigns are designed to appear to reflect public opinion, when in fact they are left-wing – activists working in concert using the technology of a sophisticated phone app. to feign public offence and artificially multiply their reach and number of voices.

Since inception, Rivitz has caused more than 4,000 advertisers to remove content from the conservative US media outlet Brietbart, particularly hated by him for their support of Donald Trump. (3) (4)

Now Sleeping Giants Oz are stalking conservative media outlets in Australia, watching and waiting to ‘catch them out’. The brave warriors of Sleeping Giants appear to believe that silencing diversity of opinion and pressuring businesses to adopt their worldview, is beneficial to social cohesion and the economy! Sky News presenters, radio presenters and journalists are all in their sights! Just one comment they disagree with is reason enough to go on the attack.

These activists sit behind computer screens – some while at work in taxpayer funded government or university jobs, and attack people and businesses to destroy them.  Chief among the Sleeping Giants activists is Edith Cowan University lecturer Andrew Priest, tweeting every day during work time and attacking conservatives under the title ‘Aushiker’.

Andrew Priest, an Edith Cowan University academic, was responsible for 43 per cent of the tweets that formed part of the Sleeping Midgets’ campaign to bully Sky advertisers between January 1 and February 21 this year.  (6) It was discovered that eight (8) out of ten (10) most active Sleeping Giants Twitter accounts were anonymous.

Copycat sisters of Sleeping Giants, this group pride themselves on being witches ‘you can’t burn’ but who take great pride in burning businesses and people’s livelihoods! They are joining in Sleeping Giants’ efforts to create division, corporate losses, mental illness and despair for families whose breadwinners have lost jobs – thanks to them. Alarmingly their Facebook page has over 50,000 ‘likes’, but it is difficult to believe that all their FB followers support their use of foul-mouthed and abusive language!

These ‘sister-witches’ determine what is hate speech, misogyny, racism, sexism and homophobia. They celebrate their destructive attacks as ‘notches on their bedposts’.  While moralizing against others, they display gob-smacking hypocrisy themselves!  One proud and visible MFW member is feminist, activist and columnist for The Guardian- Van Badham who is famous for her disgusting and abusive tweets.

It is, however, highly unlikely she will be censored or judged by her coven because conservatives are MFW’s only targets. In fact, there are many examples of  hate speech they apparently abhor – among their own kind.  (8) (9)

Here is the direct quote from MFW:

Thanks to Sleeping Giants for a copy of this clip, from a TV broadcast last night. If you watch it, witches, you may be as gobsmacked as we are, as we collectively call a fucking waaaaaaambulance for Gerry Harvey:

Here are just some of the questions witches now have about these pale, stale, mostly male cockwombles: 1. As we’ve REPEATEDLY said in past weeks, WE ARE NOT FUCKING NOBODIES. Unless anyone who hasn’t got millions in the bank is a “nobody”, in which case we probs are. This certainly seems to be Harvey’s sole argument here.
2. Harvey says, “who are they?” Witches: do you want to tell him who you are in this thread? Your selfie, and/or a short description of your life? Just to show these numpties we’re REAL PEOPLE who just so happen to object to REAL FUCKING VIOLENT THREATS AGAINST WOMEN?
3. He also asks, “how many people support them?” Well, there are 65,000-odd signed-up witches for a start, and tens of thousands more who CAN’T like or comment here because they’re employed by bitter entitled dickwads like Harvey, or by government. Our page engagement figures are 880,000 for this week alone, which is probs more by a power of 20 or so than any show currently on Sky News. “They pretend they’re somebody big” … uh, no we don’t. We haven’t pretended to be ANYTHING other than what we clearly are and will continue to be. 4. Then #StatusBRO Harvey asks if Jones has attacked us. Well, duh. He’s attacked EVERY SINGLE WOMAN ON THE PLANET, SHITGIBBONS. Plus, every non-woman of colour, and sundry other groups. And he HAS specifically attacked us, anyway, in a number of pieces published the week after this furore started. Have we attacked Jones? CATEGORICALLY, NO. ALL WE’VE DONE IS TO ASK FOR HIS HATE SPEECH TO STOP. 5. Harvey also suggests Jones should “get a lot of information on them”. Why? Isn’t this a threat? What’s he saying, specifically? Is this man threatening our Admins and followers? WHAT THE FUCK?

If you’re so angry you actually wanna DO SOMETHING today, witches, HERE YOU GO. Do the rest of these businesses REALLY want to be associated with these two men?

Fuck this. Honestly. These fucking dinosaurs can dish it out, but they can’t take any heat back, can they? WE’RE THE FUCKING PROBLEM NOW? GIVE US A FUCKING BREAK.
#GaslightAlert
#Boycott
#MoreManTears
#CantTakeTheHeatGerry

What is the fallout for business and employees?

A number of corporations have bowed to pressure and removed advertising conservative media platforms as a result of bullying attacks from Sleeping Giants (SG) and Mad F**King Witches (MFW).

These groups have now turned their attention on conservative businessman Gerry Harvey who employs thousands of Australians in Harvey Norman stores around the nation, and who supports many charities. (10). While attacking him they ignore the blatant bias and discriminatory comments on other media platforms! Their attack on Gerry Harvey appears to be in retaliation for his comments on Jones and Credlin Show (Sky News) resulting in their fit of fury and retaliation in a message sent to their supporters recently.

It appears that ANY political, social, religious or academic opinion that differs from theirs is reason enough to denounce, diminish and destroy people’s lives and livelihoods.  (11)

The question of corporate governance and responsibility to shareholders needs to be brought into the conversation!

If corporations lose business because CEO’s bow to online bullying by Sleeping Giants and Mad F**king Witches, what corporate social responsibility should we expect from them? What compensation should shareholders or employees – who may lose their jobs, receive?

The Australia journalist, Janet Albrechtson says: When it comes to corporate social responsibility, there is nothing more responsible than supporting the values that allow democracy to thrive. These companies are helping to destroy this country’s heritage of free speech in favour of a small group of activists who don’t want you to hear views that differ from theirs. (12)

Outsiders Host on Sky News, Rowan Dean says; To fight back against the long march of the left through our once-respected institutions and companies, shopping trolleys are a good place to start.   Major brands (and we would include their shareholders) will learn that having anything to do with online bullies like Sleeping Giants is the kiss of marketing death.  The anonymous trolls who tend to follow these activist groups are frequently anti-mainstream Australian values, anti-Christian, anti-Israel, anti-conservative, anti-Australia Day, anti-Anzac, anti-Libs, anti-capitalism and anti-much more besides. (13)

Media outlets could sue – but will they?

It would appear judgement day for Sleeping Giants and their sister-witches could be just around the corner. A plethora of online comments show consumers are outraged that anarchist-style outfits (including Extinction Rebellion) promoting lies and deception, can hold people, families, businesses, communities, economies and nations to ransom.  The recent capitulation of Corporate Australia to this latest left-wing-groupthink is alarming and suggests a weakness in CEO’s and their Senior Management.

Dr Matthew John Collins AM QC is an Australian barrister. He practises predominantly in media law, particularly defamation, as well as constitutional and commercial law. He is best known for having acted in several high-profile defamation and free speech cases. (14)

Commercial law experts said the tactic used by Sleeping Giants Oz of intimidating large companies into withdrawing ads from media outlets it disliked by flooding Twitter with calls for consumers to join its blacklist had opened the door to possible legal claims for harm to trade or business.

Another area for potential action by media outlets was tort law, claiming “injurious falsehood”. A media company would have to prove an allegation of “hate speech” or other alleged smear was “false” and “knowingly false” in its impact on business or trade. (15)

It is a sad reality, that differences of opinion are now reason to destroy people’s ability to hold a job, provide for a family and contribute to a community. Disappointing also, are businesses that participate in social engineering instead of focusing on their employees, shareholders and customers.

Are legal avenues the only way to stop these insidious and cowardly attacks on freedom of speech and differences of opinion? Is this the future where conservative voices in the media, in Corporate Australia and in general conversation are silenced permanently?

Capitulation and concessions to groups like SG and MFW will end in us losing our most basic human right – that of free speech.

So, how can YOU help STOP these insidious online attacks?

HAS GEORGE SOROS BEEN ARRESTED?