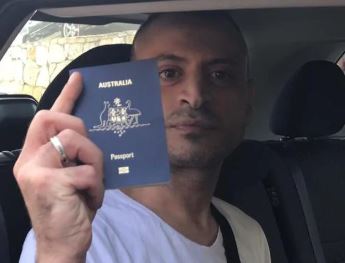 To his great relief, Amer Khayat has been cleared of wrongdoing with regards to a plot to blow up a jetliner flying out of Sydney’s Kingsford Smith Airport in July 2017.

A Lebanese court believed that his nephew Mohammed (now where have I heard that name before?) planted the bomb on Amer without his knowledge. Australian authorities believe it was his two brothers who did the deed.

Certainly, one or more of them had concealed a bomb in a meat grinder and asked him to take it with him on his flight to Lebanon.

Why he was off to Lebanon is unclear though his aunty thought he may have been intending to marry a local girl (presumably to bring her back to Australia and further enrich us).

Amer’s statements to the court varied wildly, almost as if he was lying apparently, so it is difficult know what really happened.

Australian police have charged Amer’s two brothers with planting the bomb in his carryon luggage. At the time, it was reported that the bomb was too heavy and his hand luggage was overweight causing Amer’s brother Khaled to remove it.

Strangely, The Australian is now speculating that Khaled may have removed the bomb at the last minute out of a sudden burst of compassion.

One of Amer’s other brothers had already gone to fight for the Islamic State with his two sons. The two sons were subsequently killed.

In testimony which may be of interest to our Government’s deradicalization “experts,” Amer claimed his drug addiction had kept him out of Jihad and earned him the hatred of his devoutly religious brothers.

The Australian police speculated that the brothers may have believed that blowing Amer up would have martyred him and sent him to Paradise.

After all this time then, our police still know nothing about Islamic Doctrine. Amer would have been seen as an apostate (traitor) by his devout brothers. Killing apostates does not martyr them, it sends them to a grisly Hell.

Oh boy! What a family. I’ve known some pretty dysfunctional broods in my time, both in Australia and back in the UK, but murdering your own brother and blowing up an aeroplane full of innocent people?

There should only be one question with regards to this family. Who the Hell decided to bring them into Australia and make them citizens?

Fraser was warned by his own department not to bring Lebanese Muslims into Australia as they would not assimilate.

If by “not assimilate” they meant that they would be prone to lopping off the heads of innocent people and blowing up jetliners, then they were right on the money.

Fraser felt that he was older and wiser than his advisors. Turns out he was just older.

Malcolm was born in Toorak with a silver spoon in his mouth. He was then raised on a huge family property in Western Victoria and educated at a top-notch boarding school.

Why he disliked White people is unclear. The term “race traitor” is ugly, but if such a statute was actually on the books, Fraser would have done life with no chance of parole.

He was instrumental in the abolition of White minority rule in Rhodesia. Why he felt the need to stick his nose into that nation’s affairs is unclear.

The President of Tanzania, said that he considered Fraser’s role “crucial in many parts” and the President of Zambia, called his contribution “vital.”

Rhodesia wasn’t perfect. British settlers led by Cecil Rhodes had marched in to settle the area and duped the locals into handing over land. There had been uprisings and put downs. People had been killed. There was inequality between Whites and Blacks.

Rhodesians of all creeds and colours also enjoyed peace and security after White settlement which hadn’t existed previously.

The police didn’t even carry guns up until the time when the terrorist insurgency started. This contrasted starkly with the time before the Whites showed up.

The area was inhabited by two tribes, the Ndebele and the Shona who had fought each other bitterly, for longer than anyone could remember.

White rule put a stop to those conflicts and provided a stable society with a rapidly growing economy, high wages and a 5% tax rate. Even with an international trade embargo and a brutal civil war, they managed a staggering 12% GDP growth.

This wasn’t good enough for a closet Socialist like Fraser, who like all Socialists/Communists, demanded equality and an end to White rule.

As we all know, Socialists and Communists are really good at producing equality. In the last century, they managed to assist some 100 million people to be equally dead.

Mugabe was no exception. Once Fraser helped him into power, he lost no time sending his boys off to be trained by his other benefactors – those stalwarts of democracy from the People’s Democratic Republic of North Korea.

On their return, he had them wipe out an estimated 25,000 of his tribal rivals. Having perverted any form of actual Democracy, Mugabe then bumped along for the next 20 years committing only minor acts of economic vandalism.

Once he had everyone lulled into a false sense of security, however, he began the full communist/racist treatment of the White farmers who made up the backbone of the economy.

Many were attacked, murdered or had family members raped. Most were forced off farms which they had spent their lives paying off and developing.

The economic carnage was unprecedented. The UN had never measured such a catastrophic decline in wealth in a country that wasn’t at war.

The losers were not just the Whites, but the Blacks too who suffered horribly under Mugabe. Many had to flee to neighbouring countries.

Despite this horrific destruction of an entire nation, Malcolm Fraser never once apologised.

Unlike his championing of the Black majority in Rhodesia however, he had no sympathy for the rights of the White majority in Australia.

Fraser’s predecessor Gough Whitlam (who was supposedly a bitter enemy but would later become a good friend), had appointed Al Grassby, a Mafia funded spiv (according to the National Crime Authority) to roll out the new religion of Multiculturalism.

Melbourne’s Herald Sun detailed Grassby’s appalling behaviour, including use of his position to let mafia criminals into Australia, his close association with Mafia hit men and using his Parliamentary position to smear the widow of a politician who was murdered by the mafia.

The fact that his statue is still allowed to stand in Canberra is a national disgrace. That his policy of Multiculturalism is still embraced suggests national (or at least political) insanity.

When you are in a bad situation, it is customary to look back and wonder where it all went wrong. What decision could we have taken that might have changed the course of history and avoided our present predicament?

Looking at the 1975 election, one has to shake one’s head and wonder about the choice that Australian voters had. Voters flocked to Fraser thinking they were getting away from Gough and Grassby.

Little did they suspect that Fraser would double down on Multiculturalism and Third World immigration, re-hiring Grassby, flooding Australia with Lebanese and Vietnamese and putting the White majority on track to become a minority within the lifetime of many.

Later, he campaigned in support of an Australian Republic, wrote to members of GetUp!, encouraging them to oppose Government policy on Iraq and said that “a fear of Islam in the Australian community will take years to eradicate.”

After a 2008 speech by Fraser, Liberal MP Sophie Mirabella suggested that he tacitly supported Islamic fundamentalism, and described him as a “frothing-at-the-mouth leftie” In 2009, he left the Liberals after believing that they had become “a Conservative party”???

Perhaps worse than all of these things combined, was his 2013 TV endorsement of Sarah Hanson-Young for re-election telling viewers that she had been a “reasonable and fair-minded voice.”

The total lack of choice in the 1975 election just goes to show that even then, the Australian Government was entirely in the thrall of minority ethno-religious lobbies.

These groups were powerful enough at that time to ensure that the leaders of both political parties were opposed to the interests of the White, predominately Anglo majority. They were both pro-multiculturalism and pro-mass immigration.

These lobbyists achieved this, despite the fact that these positions were wildly unpopular with a vast majority of Australians.

It was a classic bait and switch. Frothing at the mouth Gough, or seemingly moderate Fraser. It was all over before the suckers voted. Whoever won, Grassby would be returned to power deciding who the new voters would be to replace the poor trusting Aussies.

Meanwhile, the majority Anglo/European population was sailing along, blissfully unaware of the noose tightening around their necks.

If we are going to survive as a nation, we can’t carry on jamming our heads in the sand and trusting everything to our leaders. We need to wake up right now.

GOD’S GOOD MEN ON EARTH JOIN THE BATTLE AGAINST EVIL