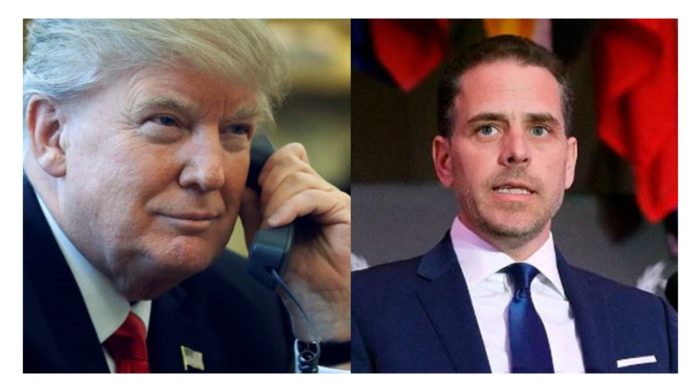 What a career Hunter Biden has had. It’s enough to make your head spin. In 1996 he graduated from law school and joined a major bank holding company called MBNA America.

Within just two short years Hunter skyrocketed to the position of Executive Vice President. Now, since MBNA was contributing to Creepy Joe’s re-election fund, we have to wonder whether this could have been purely coincidental.

Bank holding companies tend to be swamp dwelling front organisations for what could euphemistically be called “the Money Power.”

So, were MBNA donating to Joe Biden’s campaign because he is looking after the poor and the downtrodden – or because they thought they might get a generous return on their investment?

For the next two years, Hunter served in the United States Department of Commerce, focusing on ecommerce policy.

That sounds like a rather large and sudden step down from VP of a financial institution. Why he would do this is anyone’s guess.

He stuck this gig out for three whole years before co-founding a political lobbyist firm called Oldaker, Biden & Belair.

This might sound a bit suss, being a lobbyist with such a powerful father, but Hunter and his Dad claimed that they never discussed Hunter’s lobbying clients.

Biden and his father are said to have established a relationship in which Biden Senior wouldn’t ask Hunter about his lobbying clients, and Hunter wouldn’t tell his father about them.

I guess that’s how things normally work in the DC swamp.

Hunter continued in the honourable profession of political lobbyist for the next five years. He was also appointed as a director of Amtrak (the US nationalised rail business) in 2006 by President George Dubya Bush.

After his father became US Vice President in 2008, Hunter resigned as a director of Amtrak and also left his career as a lobbyist.

But if you think Hunters corporate career moved quickly, it was positively pedestrian compared to his military career.

In 2013, Hunter was selected as a direct commission officer in the U.S. Navy Reserve. In order for that to happen, he had to receive an age-related waiver and a second waiver due to a former drug-related incident.

Yep, that’s right. Hunter managed all of that stellar career trajectory whilst taking drugs – what a guy.

I don’t know who organised the waivers by the way but have a guess which proud daddy administered the commissioning oath to Hunter Biden in a White House ceremony?

Unluckily for Junior however, he failed a pee test just one month later with cocaine in his system. He insisted that someone had spiked his cigarette with the drug.

Cocaine only stays in the system for a day or so which means that he was terribly unlucky with the timing of that one.

So, after almost a full month serving his country in the military, Hunter headed back into the corporate world.

Perhaps bored with the restrictive corporate governance rules of a First World country like the USA, he chose to take a spot on the board of Ukraine’s largest gas producer Burisma Holdings.

The head of Burisma Holdings, Mykola Zlochevsky was facing a money laundering investigation at the time which prompted Hunter’s business partner to warn against this new career move due to “reputational risk.”

For US$50k per month however, Hunter Biden was prepared to take the hit.

Now, by staggering coincidence, Hunter’s daddy was taking time out from his normal busy schedule as Vice President of the USA, to fight corruption in the Ukraine (a country most of us couldn’t even find on the map).

By even bigger coincidence, one of the main targets of Joe’s anti-corruption crusade was Viktor Shokin – the guy who was investigating Hunter’s new employer Burisma Holdings.

Joe claimed he had Shokin fired because he just wasn’t investigating hard enough. Shokin was therefore replaced with a different investigator Yuriy Lutsenko who soon found that there was “nothing to see here folks.”

So, the question that springs to my mind (and this is a really important question) is this: Is Hunter Biden a hyper-capable, workaholic, over achiever – or is his father greasing the wheels of the numerous gravy trains that he has been able to ride?

The reason this is such an important question, is that if Joe Biden has been instrumental in lining up lucrative job opportunities for his son in return for political favours, then that would mean that he and his son are stone cold crooked.

This was what President Trump seemed to be implying when he told a journalist at a news conference that “Joe and Hunter Biden are stone cold crooked.”

The Democrat’s attempt to impeach Trump, hinges on the belief that Joe Biden did not threaten to withhold massive US aid money from the Ukraine Government unless the investigation into Burisma Holdings was dropped.

That will likely be a tough sell to congress, let alone the American people. The idea that Trump should not have shown interest in possible massive corruption by a US citizen simply because he is a potential rival is also pretty shaky.

Claiming that a White, English speaking male like Joe has any chance of taking the Democratic nomination in 2020 to become a serious rival to Trump, is one of the least believable aspects of the whole sorry saga.

If Joe Biden actually was donating billions of US taxpayer’s dollars to Ukraine, simply so that his son could collect a US$50k/month kickback, it will not reflect well on the Obama administration.

The real danger for the Democrats is that this whole thing could blow up in their faces, just in time for next years Presidential election. Pelosi knows this but was pushed into impeachment by the fruitcakes who make up the majority of her party.

What is so dangerous for the Democrats is that these proceedings could give Republicans the chance to subpoena people that they otherwise would never have had a chance to question under oath.

Who knows where those particular rabbit holes will lead?

For me, I’ll be stocking up on popcorn and enjoying the fireworks between now and 2020.

Let’s see if we get tired of winning