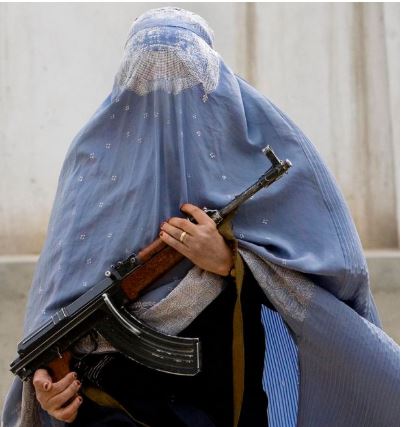 Peter Dutton is once again facing down the multicultural lobby. Thankfully, unlike Labor’s Muppet Kristina Keneally, Dutton is taking a hardline stance against “ISIS brides” and fighters. He is refusing to repatriate them – and so he should.

These people travelled to Syria to join the Caliphate. So don’t tell me that they didn’t know about the unspeakable crimes that ISIS were committing.

ISIS were plastering snuff selfies all over Twitter and Facebook for months. Even Jeffrey Epstein’s prison guards could have seen that.

Of course, the survivors all now claim to have been there solely to cook or work in the local hospital – just as former concentration camp guards all claimed they were only involved in sweeping up leaves outside the perimeter fence.

A recent poll suggests that 60% of Australians agree with Dutton that these people should be left to rot. I personally find that hard to believe – unless the poll was taken in a halal butchers’ shop in Lakemba (or else 39% want them hunted down and “taken out”).

This whole cluster flip was wholly predictable and preventable. Not only that, but it was, in fact, deliberately perpetrated on the Australian people. Every Prime Minister since Whitlam has either been complicit in, or at least indifferent to, this crime.

The Australian people are now faced, at best, with an expensive exercise determining the guilt or otherwise of people who should never have been given Australian citizenship in the first place.

Meanwhile, lunatics in the media and Government are seriously expecting us to take back these women and their offspring and provide them with food, shelter, medical care, education and targets.

“Why not,” you ask? Well, in a word, loyalty. Because whilst there may be many Muslims who actually are loyal, there are clearly many who aren’t.

In the UK, more Muslims went overseas to fight for Jihadist bands like ISIS, than joined the British Army. Does that not tell you what you need to know? Even those who join our army may not be as loyal as we think.

You may remember Nidal Hasan, a U.S. Army major and psychiatrist who fatally shot 13 people and injured more than 30 others. He did that because he was pissed off about American foreign policy in the Middle East although Barrack Obama described it as a tragic incident of “Workplace violence.”

Obama’s Chief of Staff Gen. George W. Casey, Jr. nailed his colours to the mast when he explained that, “I’m concerned that this increased speculation could cause a backlash against some of our Muslim soldiers … Our diversity, not only in our Army, but in our country, is a strength. And as horrific as this tragedy was, if our diversity becomes a casualty, I think that’s worse.”

So, the 13 dead and 30 wounded soldiers were a bit of an upset, but so long as diversity wasn’t derailed, it was a price he was willing to pay. What a guy.

Then there were all the incidents of “green-on-blue” murders by Afghan citizens who were given training and weapons in order to assist them to take care of their own country.

They turned the weapons on Australian soldiers who were trying to help them. Clearly, they weren’t loyal to the Australian people. Why should they be?

They were Afghans, not Aussies. Does anyone really believe that handing them an Australian passport is going to instantaneously change their allegiance? Why would it?

Some Afghans might well be loyal to Australia but who knows which ones? Clearly not the Australians in Afghanistan handing out weapons to Afghan recruits.

People have allegiance to their own people. Handing someone a passport and expecting that allegiance to change overnight is just retarded.

When we add Islam into the mix, it becomes even more volatile. The treacherous Malcolm Fraser probably knew nothing about Islam and that is understandable. However, a politician today has no excuse.

The level of carnage and terror which has directly impacted on Australians here and elsewhere around the World is unprecedented.

We desperately need politicians and other citizens to learn the truth. We need to get the word out.

Getting Through to People

Regular Richardson Post readers know that the easiest way to get through to the wilfully blind is by handing them a copy of The Story of Mohammed Islam Unveiled.

This book is still available to read for free online here:

However, with Christmas coming around rapidly once more, I am offering a Christmas deal of 10 copies for just $90.00 including all postage etc.

Many of you have already purchased copies but if you haven’t, can I suggest buying some and giving them away as Christmas presents, including to your local Member of Parliament.

The difference you can make with just a few copies of this book is nothing short of amazing. Check out the reviews on Amazon. It will really change people’s perception of the world.

Just email me at harryyo@gmail.com for your order.

Fraser Anning was censured for a clumsy response to the Christchurch massacre, yet our Parliament is full of clowns who want to bring actual ISIS members back into the country.

Good on Peter Dutton at least for standing up to the crazed Left and the Multicultural lobby.

We have to put a stop to this insanity right now.