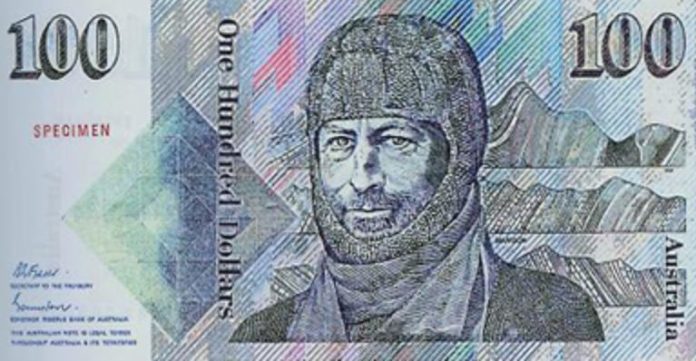 Donald Trump is under fierce pressure from the mainstream media and his political opponents to lockdown the entire US economy.

They insist he should do this to prevent more deaths from the WuFlu which has been suspiciously prevalent in the USA.

Of course, there are a lot of deaths from Covid19, even if they are overstated slightly, and each one is tragic.

Yet there is a risk to the economy which carries more downside than people realise.

Western nations came into this crisis indebted. We did not have savings. When Kevin 747 was elected in 2007, the Australian Government was 20 billion dollars in surplus thanks to Peter Costello who wasn’t described by international bankers as the world’s best treasurer.

Added to that, we have a crappy, dishonest monetary system foisted on us by banks and Government.

Admittedly, this system is not as bad as the original system where governments just printed money. That led to currency collapse as soon as the Government found something pointless to squander unlimited amounts of money on (usually a war).

Nowadays, the banks print money for the Govt and lend it out at interest. Money is created through new loans and destroyed by repayments.

The banks, through the mechanism of the reserve bank, can create more or less money as they require it.

However, they aim to constantly create just a little more all the time. 2% to 3% is the target inflation level, which just nicely enriches the banks without crashing the system.

This doesn’t always work, however. The scam destroys the productive economy. People stop building factories and instead, borrow to buy and renovate houses.

Eventually, borrowers are tapped out and despite the central banks creating more reserves, people just refuse to borrow.

It has been likened to pushing on a string as reserves build up in the system but are not taken up. It’s a bit like fuel building up in a forest when no fire is burning.

Meanwhile, the bankers are desperately trying to light a gentle fire of inflation to stoke their profits back up again. What could possibly go wrong from here?

The problem with money printing is that it corrupts people’s morals.

Imagine having your own money printing press but vowing never to use it because you are a moral person.

Then, one day, your car is written off by some lunatic drunk driver. You need a new car for work, so you decide to print a little money – you will pay it back of course.

Since you are going to pay it back, you decide to get the GS version with the leather seats and the upgraded engine. Somehow, however, you just never seem to get around to paying back the money.

Then, your daughter needs to go to private school as she is having difficulties. It is such a good, moral thing to do – and a few more dollars won’t hurt.

Unfortunately, as always happens, disaster strikes, and your wife needs a life saving operation in America which will cost a million bucks.

Before you know it, you are in the attic, printing money night and day.

That is how it happens with Governments. A little money printing here, a little more there. But it is when disaster strikes that they will always be tempted to print their way out of it.

You may have heard of the inflation in Weimar Germany after WW1.

After WW1 crippling reparations to the Allied powers left Germany in a desperate situation, they printed money to make up the shortfall.

The resulting hyperinflation was horrendous. It wiped out almost everyone, but particularly the middle class. Starvation and suicides were commonplace.

Zimbabwe is another famous example. The Government stole productive farmland from white farmers and gave it to black thugs with guns.

Naturally, the land then became totally unproductive. This left the people and the Government penniless and destitute. In order to make up the shortfall, the Government began to print money.

The rest, as they say, is history.

Countless countries have destroyed their productive capability through Socialism/Communism. They commonly print money to make up for it.

There was a joke in the old Soviet Union: “We pretend to work and they pretend to pay us.”

It was no joke really, as the Venezuelans are currently finding out.

Shutting down our economy for Covid19 could be our Weimar moment. The Government has responded to the crisis by handing out money. Where is it getting this money from? Nobody is asking that question.

I guess they are borrowing and printing it.

Eventually, that will show up in inflation. Of course, the Government will try to fudge the figures by altering the inflation statistics so how can we gauge this inflation?

Gold should be a reliable indicator but banks and govts manipulate its price too. How do they do this?

When the Government destroys the value of our money by printing more, smart people start buying gold.

That sends the gold price up and depresses the price of paper money further. This limits the ability of the banks and government to print more money – which they hate.

To cover this up, they simply print more gold to depress its price.

That may sound strange. After all, isn’t the beauty of gold the fact that it can’t be printed?

Well, of course, you can’t print real gold, but large quantities of gold are bought by institutions like super funds, insurance companies, or hedge funds.

Instead they go to a bullion bank, which sells them a certificate. The certificate says that they own gold which is held by the bank in its own vaults.

Unfortunately, no one checks out this gold. The bank has most of this gold in “unallocated” accounts.

Buying gold in an unallocated account means that you don’t own a particular gold bar, you buy into a pool of gold. In fact, you don’t even own the gold – the bank does.

So, because no one ever comes for the gold, the banks can sell certificates for more gold than exists. They know that no one can call them on it.

This should be illegal, but govt strangely gives the bullion banks a free pass – most likely because the Government is in on the scheme.

So, when demand for gold ramps up, bullion banks can simply print more certificates which are as good as gold – until they aren’t.

That would depress the price of gold when everyone is expecting it to rise. By doing this, they could discourage people buying into the gold market in time of uncertainty (when they really should be buying gold).

This also means that as people are buying an abundant, and rapidly increasing, supply of certificates, the gold price is not rising as it should. There are lots of good articles on this subject here:

Estimates say that 95% of institutionally held gold is in unallocated accounts and according to this estimate, there may be 10 to 20 ounces of gold sold, for every one the banks actually own.

I don’t know if that is true, but it would be putting a major drag on the gold price if it were. Despite that, the price of gold has been on somewhat of a tear of late, certainly in Australian dollar terms.

Because although the banks and governments can influence the price of gold, they can’t entirely control it, especially in the long term.

Check out this graph

If you have much experience as an investor, you may be thinking that what goes up, must come down. No asset goes to the stratosphere forever.

However, I think that we are looking at this graph the wrong way. Allow me to turn it upside down (hat tip to Microsoft paint).

This graph would now represent the value of the Australian dollar as expressed in gold ounces. I think that this is more instructive.

How about charts of the Zimbabwe dollar or any number of South American currencies? What goes down, doesn’t necessarily come back up.

A currency collapse causes unimaginable suffering, pain and yes, plenty of deaths. So why is Scott Morrison being lauded as an awesome leader, whilst Donald Trump is being vilified as a dangerous and unstable lunatic.

Morrison is giving away free, freshly printed or borrowed money, whilst Trump is trying to protect America’s manufacturing industries that he had so successfully revitalised.

Unfortunately, most mainstream journalists are either

Personally, I suspect that Trump’s instincts are correct, and that Morrison is a happy clappy fool who is drunk on the media adoration of his reckless “money for nothing” socialist policies.

I hope I’m wrong, but time will tell. 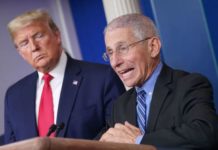 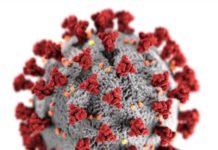 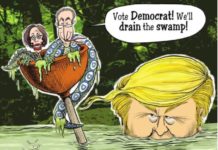