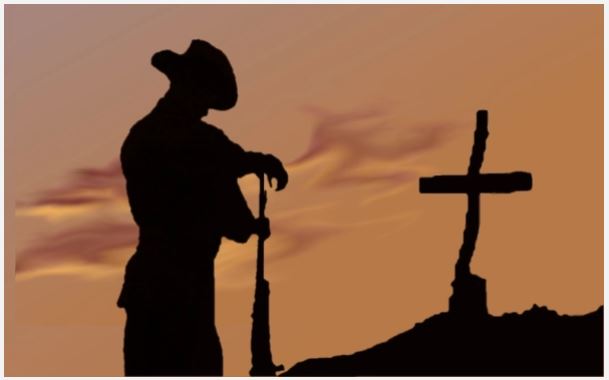 I wandered thru a country town ‘cos I had time to spare,

And went into an antique shop to see what was in there.

Old bikes and pumps ad kero lamps, but hidden by it all,

A photo of a soldier boy – an Anzac on the Wall.

“The Anzac have a name?” I asked. The old man answered “no,.

The ones who could have told me mate, have passed on long ago.

The old man kept on talking and, according to his tale,

The photo was unwanted junk bought from a clearance sale.

“I asked around,” the old man said, “but no one knows his face,

He’s been on that wall twenty years, deserves a better place.

For some one must have loved him so, it seems a shame somehow.”

I nodded in agreement and then said, “I’ll take him now.”

My nameless digger’s photo, well it was a sorry sight

To prise the photo from its frame I took care just in case,

“Cause only sticky paper held the cardboard back in place.

I peeled away the faded screed and much to my surprise,

Two letters and a telegram appeared before my eyes

The first reveals my Anzac’s name, and regiment of course

This letter written from the front, my interest now was keen

This note was dated August seventh 1917

“Dear Mum, I’m at Khalasa Springs not far from the Red Sea

They say it’s in the Bible – looks like Billabong to me.

And Mum you’ll soon meet Bluey, last month they shipped him out

I told him to call on you when he’s up and about.”

“That bluey is a larrikin, and we all thought it funny

He lobbed a Turkish hand grenade into the Co’s dunny.

He stopped the bleeding closed the wound with only his bare hand.”

He woke up in hospital, and nearly lost his mind

Cause out there on the battlefield he’d left one leg behind.”

“He’s been in a bad way mum, he knows he’ll ride no more

Like me he loves a horse’s back he was a champ before.

So Please Mum can you take him in, he’s been like my brother

Raised in a Queensland orphanage he’s never known a mother.”

But Struth, I miss Australia mum, and in my mind each day

I am a mountain cattleman on high plains far away

I’m mustering white-faced cattle, with no camel’s hump in sight

And I waltz my Matilda by a campfire every night

I wonder who rides Billy, I heard the pub burnt down

I’ll always love you and please say hooroo to all in town”.

An answer to her soldier son there in a foreign land

Her copperplate was perfect, the pages neat and clean

“T’was hard enough to lose your Dad, without you at the war

“Your Kathy calls around a lot since you have been away

And Bluey has arrived – and what a godsend he has been

“He really is a comfort, and works hard around the farm,

I read the same hope in his eyes that you wont come to harm.

We had a violent lightning storm, and it was really strange.”

“Last Wednesday just on midnight, not a single cloud in sight

It raged for several minutes, it gave us all a fright

And then he rushed the sliprail fence, which by a foot he cleared”

“They brought him back next afternoon, but something’s changed I fear

It’s like the day you brought him home, for no one can get near

Remember when you caught him with his black and flowing mane?

Now Horse breakers fear the beast that only you can tame,”

This letter was unfinished, and I couldn’t work out why.

Until I started reading the letter number three

The Same date as her letter – 3rd November 17

This letter which was never sent, became then one of three

She sealed behind the photo’s face – the face she longed to see.

Would say no greater cattleman had left the town before.

They knew his widowed mother well – and with respect did tell

She could not face the awful truth, to strangers she would speak

“My Johnny’s at the war you know, he’s coming home next week.”

They all remembered Bluey he stayed on to the end

A younger man with wooden leg became her closest friend

And always softly say “yes dear – John will be home next week.”

Then when she died Bluey moved on, to Queensland some did say

I tried to find out where he went, but don’t know to this day

And Kathy never wed – a lonely spinster some found odd

This explains my photo’s journey, that clearance sale

So I continued digging cause I wanted to know more

His last ride proved his courage – a ride you will acclaim

The Light Horse Charge at Beersheba of everlasting fame

That last day in October back in 1917

That’s when John’s life was sacrificed, the record’s crystal clear

But 4 pm in Beersheba is midnight over here ……

Were lightning bolts back home a signal from the other side?

Is that why Billy bolted and went racing as in pain?

Because he’d never feel his master on his back again?

Some proof of numerology, or just a quirk of fate?

I think it’s more than that, you know, as I’ve heard wiser men,

Acknowledge there are many things that go beyond our ken

Where hoofbeats are companions to the rolling waves of thunder

Some Mountain cattlemen have sworn on lonely alpine track

They[ve glimpsed a huge black stallion – Light Horseman on his back.

Oh no, my friend you cant dismiss all this as superstition

The desert of Beersheba – or windswept Aussie range

Now some gaze at this photo, and they often question me

And I tell the a small white lie, and say he’s family.

That’s why he takes the pride of place – my Anzac on the Wall.

Jim is a former Primary Schoolteacher, Police Officer in N.Z. where he was born and where he also commenced a career as TV Journalist before moving to Melbourne.

In Australia Jim worked as a News and current affairs journalist for Channels Nine and Ten where he won awards for his reports on the Chamberlain Trial, the Ash Wednesday Fires. He covered overseas events including the fall of the Marcos Regime and the trial of Australian Priest Brian Gore in the Philippines.

In 1991 he joined the ground-breaking lifestyle program “Healthy Wealthy and Wise” as a presenter of travel and human interest stories. Around Australia Jim filed stories on more than 270 destinations and characters, and more than 50 overseas including NZ, Northern Ireland, and USA (Los Angeles, & New Orleans) South Africa.

Jim is now a freelance Producer of broadcast and corporate TV, videos and DVD’s cameraman, & editor.

In recent years Jim has branched out as a songwriter, and performer of classic Australian Bush Poetry and his own work, for which he has won several awards both in Tamworth and other competitions around Australia including the Bush Laureates Golden Gumleaf Award for recorded poetry. This is the most prestigious poetry award in Australia.

Jim has won the State of Victoria’s Bush Poetry Champion, and has recently returned as a tour guide for a “Celtic Spirituality tour of Ireland” to examine the roots of our music, culture and the Christian religion to understand how they all fit into our lives today. In 2006, Jim was invited to perform at the Adelaide Fringe Festival, Port Fairy Folk Festival, and the Tullamore Irish Festival. In September this year Jim won the inaugural Wool Wagon Poetry Competition in Crookwell NSW.

Jim enjoys working with young people and teaching them how rhyming verse is relevant to their generation. Besides rediscovering the joy of our unique Australian poetry classics from the pen of Banjo Paterson and others, audiences have enjoyed Jim’s own verse and music. An hour with Jim helps understand the soul of Australia.

Author’s Note: It started when I was a TV journalist preparing to travel to Gallipoli for the 75th anniversary of the landing [1990]. I went to Canberra to gather photographic support for a TV documentary, and while in the archives of the Canberra War Memorial Museum a lovely old man put a box of letters before me. The letters were untraceable, and had no addresses. They were written to and from the war front and I was entranced by them. I was not allowed to take them away, but I made notes. This was a long time before I became a bush poet,

The final cog in the wheel was about 5 years ago when I went into an antique shop and saw a photograph of a light horseman on the wall. For some reason I still can’t explain I had to have it, and started writing a poem based on the question who was he? This was the first or shorter version of the poem.

I later revisited my notes of the letters and incorporated them into the longer poem. What struck me in the letters was the untold suffering of Australians waiting at home, and how many mothers and fathers knew intuitively that they had lost a loved one on the other side of the world. Those close to the land seemed to know from signs of nature, and these are in the poem.