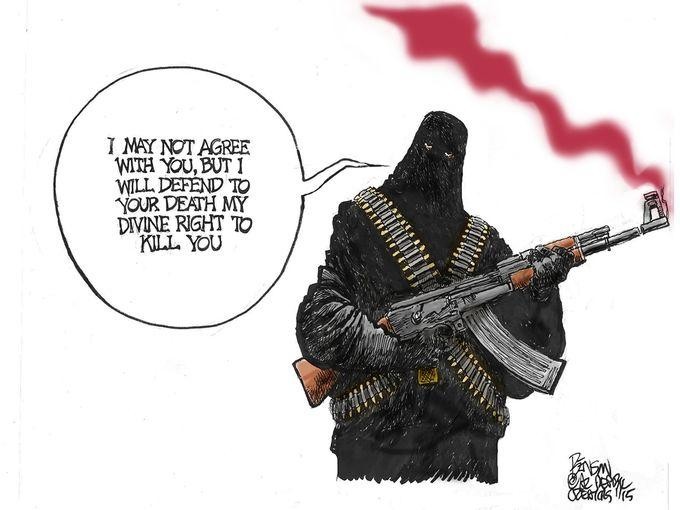 The words “Terror Attack in Paris” caught my eye in the corner of my browser. With a now familiar sinking feeling, I clicked on the link to see what had happened.

Three men had entered the office of Charlie Hebdo, a magazine known for lampooning Islam. They were armed with AK47’s and a rocket launcher.

Now I know that President Obama himself has warned us not to jump to conclusions in these situations, but at this point I had an eerie feeling of déjà vous creeping down my spine (if you’ll excuse my French).

As I read further however, I find the men were heard yelling “Allahu Akhbar” and “Now we have avenged our Prophet” while savagely murdering 12 innocents in cold blood. Well quelle surprise! (If you’ll excuse my French). This time they won’t be able to deny the Islamic link, I thought to myself.

Predictably of course, as I get a few more lines down the article, no lesser authority than British PM David Cameron is telling us that the cause (rather than the effect) of this outrage is “Terror”.

Once again, I find myself thinking, “Is there anything that anyone could possibly do to convince these people, (and I know plenty of them myself) that these acts of terror really are inspired by Islam?”

I know the answer of course. Not long ago, two Muslims beheaded a British soldier on the streets of London in broad daylight. They asked people to video tape their crime, and told the world that this was done in the name of Islam. They even stood there and brazenly read out the relevant passages from the Koran which had justified and inspired their actions. The authorities solemnly assured us that this had nothing to do with Islam.

What is wrong with these people??

Then I thought back to what my father had told me. “There is nothing new under the sun (son); everything you see has been done before.”

Well, if this has happened before, then I figured there must be a word to describe this mass psychosis. Inspired I opened my Cambridge Dictionary and began frantically searching. Luckily for me, before I was half way through the “B’s” I came across the following definition:

a person who has strong, unreasonable beliefs and who thinks that anyone who does not have the same beliefs is wrong:

That’s it! I thought. Now that we have a name for this kind of person, perhaps we can find a way to get through to them.

The word, which was apparently first used as an insult against the Normans, (if you will excuse the French), is “bigot”.

Hmm, perhaps while I have my dictionary open, I will look up the words “Freaking ironic” (if you will please excuse my French).

FINALLY – OUR REVOLUTION BEGINS: TRUMP IS BRINGING BACK MR. CHIPS