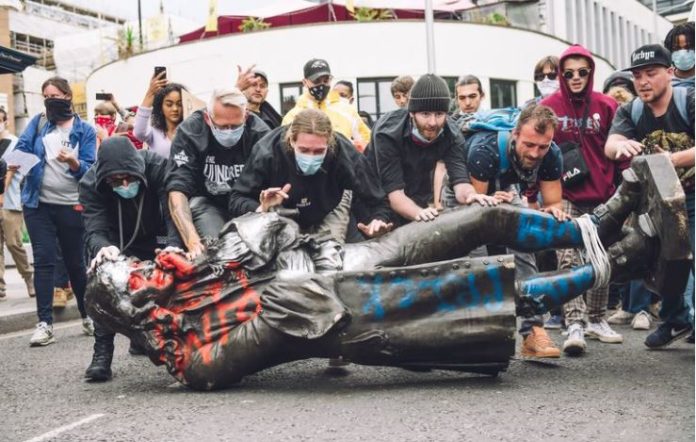 ARTICLE NOT WRITTEN BY HARRY RICHARDSON

In the great cathedral at Como, Italy, there are two large statues: one of Pliny the Elder and the other of his nephew, Pliny the Younger.  Despite calls from some in the church to remove them, the images of these two pagan writers have stood in Como Cathedral for 500 years.

When told that neither man had been a Christian and that the nephew had been a persecutor of Christians in the province of Bithynia, the citizens of Como fought to preserve the statues of these two favorite sons.  Both Plinys were an important part of their history.  Pliny the Elder was one of the most prolific Latin writers on history and science, and Pliny the Younger was an important historian, the only person to leave a firsthand account of the eruption of Mt. Vesuvius in 79 A.D.  The real heresy was the attempt to rewrite history by removing all references to anyone who was “pagan.”

It seems that Italians have more common sense than some Americans.  The removal of hundreds of Civil War monuments, including the recent removal of a statue of Jefferson Davis and an attempt to remove the imposing image of Robert E. Lee in Richmond, are part of a similar attempt to suppress an aspect of our history that some now see as offensive.

It does little good to note that many southern leaders before and at the time of the war, including Jefferson; Madison; Clay; and Robert E. Lee himself, who assisted slaves moving to the free colony in Liberia and provided emancipation for his slaves in his will, had serious moral qualms about the institution of slavery and hoped it would eventually be eliminated, regardless of the outcome of the war.  Although they owned slaves, Jefferson and Madison both spoke of slavery as an evil that must be abolished.  Henry Clay, who authored the Great Compromise of 1820, sought to preserve the union by maintaining a balance of slave and free slaves.  In his funeral oration for Clay, Abraham Lincoln said, “Such a man the times have demanded, and such, in the providence of God was given us.”

Even those like Jefferson Davis, a strong defender of states’ rights, should be seen as an important figure in American history.  The removal of his image, along with those of all who owned slaves or fought for the Confederacy, is an attempt to rewrite history in a way that is extremely unhealthy.  It would erase much of our national history and, for that matter, world history. But it is dangerous to avert one’s gaze from whatever is troubling or unpleasant.  It creates the false impression that evil does not exist.  Those who are not willing to live with their past are likely to repeat its errors.

No one today would defend the idea of slavery, but slavery was once universally practiced.  Before and even after the Civil War, slavery existed in one form or another in most parts of the world: throughout Africa and the Middle East, Asia, Latin America and the Caribbean, Russia (via serfdom), in parts of Europe, and even in the northern colonies and states of America.  The Plinys, whose images still stand in Como cathedral, were the owners of dozens of slaves.  Benjamin Franklin once owned slaves, as did the family of America’s first female poet, Anne Bradstreet, along with Patrick Henry, George Washington, John Marshall, and Lincoln’s wife Mary Todd Lincoln.  Nearly every important figure in early American history can be tied to slavery either directly or through the actions of his ancestors.  As an attorney, Alexander Hamilton negotiated the sale of slaves, while Lewis and Clark were accompanied by Clark’s slave York on their western expedition.

Are we to destroy all references, documents, and images relating to the early history of our country on the grounds that mentioning their names or viewing their images makes us uncomfortable?  That would be akin to a Christian society suppressing all mention of those who are not Christian, or whose ancestors were not (that would include everyone).  Are we to remove all references to the civilizations of ancient Greece and Rome, to Egypt and the Middle East, and to India, China, and Japan on the basis that they were pagan?

Slavery was legal in all of the early colonies and states, just as it was throughout most of the world (it was not abolished in Brazil until 1888).  The fact that it was almost universal does not make it right, but it does require us to judge our ancestors in the context of their times.  Robert E. Lee was not a “bad” man: he fought to defend states’ rights and out of loyalty to his home state of Virginia.  Before the Civil War, he earned distinction in the Mexican-American War and served as superintendent of the United States military.

This is not to say slavery was right or that the southern states were right in defending it. What that statue of Lee will do is to remind us that the past was different and that things have changed.  Slavery was cruel, and many in the South and the North realized that even before Emancipation.

Other sorts of cruelty exist today, such as the billion people still living under communist rule.  Many of those calling for the removal of the Lee statue are silent about that form of cruelty.  Should we remove all reference to Marx and Marxists, including left-leaning presidents such as Woodrow Wilson, Franklin Delano Roosevelt, Lyndon Johnson, Jimmy Carter, and Barack Obama, from our national history?  There is a good case for doing so if one believes in suppressing whatever makes one uncomfortable.

Jimmy Carter and Barack Obama make me uncomfortable, but I accept that they were part of our history.  I’ve never suggested they be removed from the public discourse or that those who admire them be silenced.  I believe that by losing China to communism, FDR was complicit in the murders of 70 million people, but for me his image is a reminder of that evil, not something to be erased from history.  Likewise, LBJ was the architect of a deadly welfare state, Carter the instigator of economic collapse, and Obama the organizer of a push toward socialism.  It has taken a strong conservative to reverse the evils that each brought about.

Still, history books will continue to write of Wilson, Roosevelt, Johnson, Carter, and Obama, and it is proper to do so.  The Roosevelt Memorial in Washington, D.C., is one of two memorials dedicated to FDR’s memory.  I do not support any attempt to deface, damage, or remove this or other memorials.  Nor can I support the removal of Civil War statues such as those dedicated to Jefferson Davis and Robert E. Lee.

The suppression of history is always dangerous. By hiding the truth about the past, we make it all the more likely that we will repeat similar errors.  Only by coming face to face with our mistakes, even a mistake as terrible as slavery, can we hope to avoid similar mistakes in the future.

Jeffrey Folks is the author of many books and articles on American culture including Heartland of the Imagination (2011).
Originally posted at American Thinker

THE MENACE OF TERRIFYING WHITE SUPREMACY IS ON THE RISE