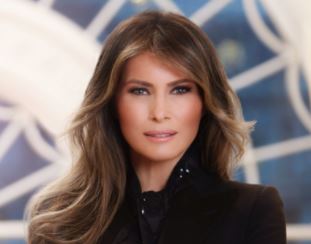 It is customary at this time of year, for major publications like The Richardson Post to name their man/woman of the year. So far, we’ve resisted this trend, but this year, we just feel that there is one person who is just screaming out for recognition.

The disgusting, globalist owned, corporate media companies would rather drink battery acid than praise someone associated with President Trump.

Yet whatever your views of Donald Trump, the vindictiveness of these corporate shills should be raising red flags for anyone who still thinks that they have any credibility whatsoever.

Melania Trump came from an ordinary background in a Communist country. Fortunately, thanks to a blossoming modelling career, she was able to leave.

Modelling might sound easy, but it isn’t. Lots of girls are chewed up and spat out by that machine; and to survive and succeed takes guts and determination.

Marrying Donald Trump must have seemed like a dream come true. Trump was massively successful in real estate, TV, modelling and seemed able to succeed in whatever field he took to.

He was feted in the media and even popular culture, being mentioned in rap lyrics hundreds of times.

But once he stood for president and took aim at the sacred cow of replacement level, Third World immigration, it was on for young and old.

Melania went from fashion and beauty icon to pariah overnight. Her friends didn’t just desert her, one of them tape recorded conversations with Melania which she then played on CNN (what a scumbag).

The press and the Left went into meltdown over Trump and to be fair, Donald did his fair share of trolling them.

Donald’s Twitter rants against the gutter media was his way of fighting back.

Sadly, the media used these Tweets to ridicule and undermine Melania’s one cause. She had spoken out against cyberbullying, so the media hacks used their platform to ridicule her efforts, accusing her husband of bullying them – as if they were the victims.

In this clash of titans, Melania never once flinched. She never criticised her husband or publicly tried to distance herself.

She never tried to excuse herself by embracing trendy opportunistic causes or attempting to signal her virtue to the world.

Melania kept her nose out of where it wasn’t needed and simply got on with what she was supposed to do.

We learned from her so called ‘friend’ that she hated doing the Christmas decorations because no one really cared about them. Yet she did them anyway and I suspect she would have done an awesome job.

Early in her career, she did some fairly racy photo shoots. Yet she never cheapened the office of FLOTUS by a single cent. At every appearance or engagement, she appeared with poise, dignity and elegance. She really was a super model. Stoic, heroic.

Maybe she thinks we didn’t notice. Us, the little people. We don’t have multibillion dollar media or tech companies to emblazon our message.

Richardson Post is about as good as us deplorables can manage for now.

But we did notice, Melania. We see and we know. Donald Trump is the only leader in a generation to fight, not just for traditional Americans, but for the Western World and all we stand for and all we have built.

Our enemies have thrown everything at him, these last four years. We see the almost superhuman strength he has stood up to them with – and we know where it comes from.

No man can muster such strength without the backing of an extraordinary woman.

A woman who will sacrifice all, without once asking for recognition.

We are making history right now and when this story is told, there is one name that should not be left out. That name is Melania Trump.

That is why we lied when we said, she is the Woman of the Year. Truly, Melania is the woman of the decade and We, the People will never forget what she has done for us.

Thank you, Melania. That Vogue wouldn’t have you on its cover, tells us everything we need to know.

You are our hero, and we love you.