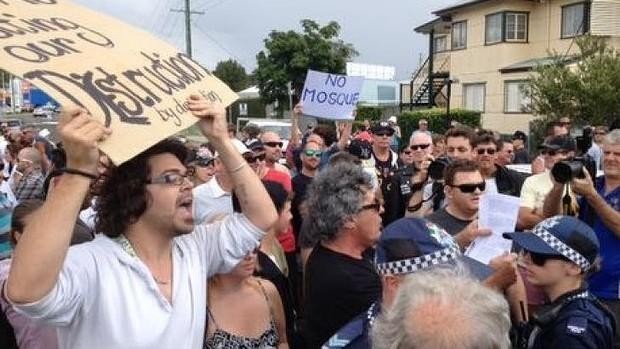 In local councils across Australia, and indeed most of the Western World, applications are pending for the building of new Mosques. Until recently, these applications would have been approved with little more than a rubber stamp and a few suggestions as to local planning.

Today however, things have changed. Mosque applications have become rallying points for community anger and hostility. Demonstrations and campaigns are becoming commonplace.

There appears, in each of these disputes, a three way split with the bewildered councillors stuck squarely in the middle.

On the 'yes' side, we naturally have the Muslims who have purchased the land and want to build the mosque.  On the 'no' side is a group of strident residents and activists who are implacably opposed to it.

Then, also on the 'yes' side are those who sympathise with the Muslims who, as they see it, simply want to build a place of worship and should have the right to do so in a free society. For convenience, I will refer to this group as the allies.

In the main, the allies seem to view the protesters as uncultured rabble, motivated by racism and hatred of anything alien to their own small minded world. They consider them to be uneducated and acting from ignorance. They reason that if these protesters understood more of the ways of other cultures they would discover them harmless. They believe these protesters might then discover aspects of this culture (such as tolerance, for instance) from which they could in fact learn.

On the surface, this would seem a very reasonable stance for the allies to take but, as we start to dig a little deeper, we find that things are not quite what they seem. For a start, we soon find that the allies themselves have no knowledge of Islam whatsoever. What they do know has been successfully sold to them by Islamic spokespersons.

They do not take the time or make the effort to search beyond the Islamic line.

Ironically, many of the protesters have actually taken the time to educate themselves about Islam from the authentic Islamic sources and contemporary teachings.

Here are some of the reasons why we find many of these teachings to be deeply troubling.

What is a mosque?

It is vitally important to understand what a mosque represents in Islam.

A mosque is not like a church or a temple, it is much more than a place for Muslims to simply worship their God (Allah).

Mosques are modelled on the first mosque established by Mohammed in Medina which was a seat of government, a command centre, a court, a military training centre and an arms depot.

A mosque is much more than a church.

In light of this, we need to answer these two simple questions:

2)           Why do mosques have capacities much greater than the local Muslim communities could fill?

The Prime Minister of Turkey, Recep Tayyip Erdogan, understood the military nature of a mosque when he stated:

“A mosque is our barracks, the domes our helmets, minarets our bayonets and the faithful are our soldiers."

Islam’s founder, the Prophet Mohammed, was not just a religious leader but a political and military one too. He raised armies and fought and killed people until he was the King of the whole of Arabia.

The religion of Islam is entirely based on the example and teachings of Mohammed.

Unlike any other major religion therefore, Islam is also a political and military force.

The Influence of the House of Saud

Mohammed was the guardian of Islam in the seventh century. Today that responsibility rests with the Saudi Royal Family or the House of Saud. The two holiest Islamic sites in Mecca and Medina are under its control.

The late king, Fahd bin Abdul Aziz, understood this when he wrote “The efforts of the servant of the two Holy Places support the Muslim Minorities.”

The Institute of Muslim Minority Affairs (IMMA) is the vehicle which the late king created to establish the Islamic World Caliphate. It is Saudi Foreign Policy and Jurisprudence from the Saudi Ministry of Religious Affairs.

In the words of King Fahd, mosques, educational centres and Islamic bodies like the Islamic Society of North America (ISNA) and Muslim Students Association (MSA) are all geared towards hindering Muslim assimilation into non-Muslim nations so they can act as a fifth column to bring victory to Islam.

In 1965 during the pilgrimage or Hajj, the World Association of Muslim Youth or WAMY was created to work toward this end and for the non-Muslim world; IMMA or the Institute of Muslim Minority Affairs was born.

WAMY and IMMA were a collaboration of the Wahhabist and Muslim Brotherhood led by:

The House of Saud and the funding of terrorism

In May 2008, Robert Spencer’s website “Jihad Watch” reported that the Saudis had spent over $US100 billion on this project over the three previous decades.

These funds were used to build mosques to fund the payroll of Imams and to build Islamic schools.

They were also apparently intended to corrupt the education system through the funding of universities and the rewriting of school text books to favour Islam while denigrating Christianity and Western achievements.

According to this article, the late king Fahd bin Abd al Aziz and his family had personally donated hundreds of millions of dollars to groups like Hamas and Al-Qaeda.

Prince Sultan bin Abd al-Aziz was a defendant in the September 11 trials and admitted to donating $US4 million to terrorist organisations like IIMO and WAMY.

Now we can answer our questions.

Question: Why are so many mosques being built?

Answer:   Muslims currently have over 370 mosques in Australia which, per capita, is more than six times the number of Buddhist and Hindu temples. This could well be because the mosque is intended as a beachhead for Islam, a place to plan Jihad and to implement Sharia law.

Question: Why do mosques have capacities that cater for far greater numbers than those in local Muslim communities?

Answer:   The mosque is deliberately built to dominate the neighbourhood to show the supremacy of Islam over Christianity and all other faiths.

What is taught in the mosque comes directly from the Qur’an, the Hadith and Sira, and the 'Reliance of the Traveller', which is the Manual of Islamic Law.

The Manual of Islamic Law teaches in Law O9.0 that it is a communal obligation for Muslims to wage Jihad to establish Islam as the religion and the law.

There are many examples of these teachings being delivered in mosques which give cause for alarm.

1. On April 27 in the Preston mosque in Melbourne, an audio tape exists of brother Baha delivering a speech calling on Muslims to engage in Jihad against Australians (in line with Islamic Law O9.0)

2. Sheik Feiz Mohammed who teaches at a mosque in Auburn in Western Sydney, is on video calling for the mass slaughter of all Jews, while making pig noises. (This is perhaps inspired by?) the Hadith of Muslim book 41 No. 6985)

3. Sheik Hilaly of the Lakemba mosque, a former Grand Mufti of Australia, defended the rape of women who were not covered in acceptable Islamic dress. There is now evidence of a rape epidemic in Europe by Muslims because Islamic Sharia law does not penalise a Muslim for raping a non Muslim woman.

What must be done?

The conundrum for Law-makers in the West is that a mosque operates under the protection of religious freedom.

This is unacceptable because a mosque is not just a religion, but also political centre and a place where legal rulings are made. Some of these rulings breach Australian law and ironically also call for the restriction of religious freedoms for all non-Muslims.

Our politicians, law-makers, law enforcement officers and security agencies need to acquaint themselves with the teachings within mosques which, after all, are preaching their prophet’s Sharia law which is largely incompatible with Australian law.

Law-makers and law-enforcers must now turn their minds toward recognising Islam as a political entity and remove the current protections Islam receives as a religion.

Failure to do this is likely to end in serious political and societal consequences in the future.