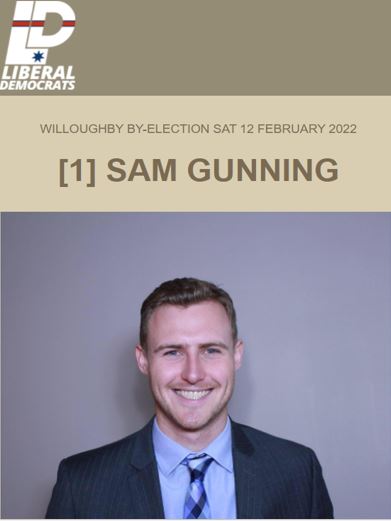 To anyone voting in the up coming Willoughby by-election. The only freedom candidate running is Sam Gunning.

Unfortunately, as all the independant candidates are left leaning the only option for Sam Gunning is to preference the Liberals candidate, Tim James, to ensure Labor and Greens chances of gaining the seat are minimised.

See below email from James Darby

Liberal Democrat Party’s (LDP) How To Vote (HTV) is showing every box numbered with Greens Last.

No other Freedom Candidate accepting of our Mantra is standing which elevates Liberals to number TWO.

The Liberal Candidate for Willoughby is Tim James, who won Liberal selection by plebiscite against the wishes of the unpleasant factional establishment. The addition of Tim James to the Parliament will be greatly to the benefit of New South Wales I say from personal campaign experience prior to 2007.

There are three left wing candidates, Larissa PENN (Independent), Lynne SAVILLE (Greens) and Penny HACKETT (Reason) who are supported by GetUp! and other hostiles in a concerted attempt to defeat Tim James and install one of the three in the NSW Parliament as a Legislative Assembly equivalent of the appalling Member for Warringah Zali Steggall.

Of great interest to us in this contest is the remaining candidate Samuel GUNNING (Liberal Democratic Party) who is properly directing his second preference to Tim James.  By issuing a HTV recommending a number in every square, Sam Gunning is setting a great example in showing that the NSW optional preferential system is unacceptable and must be changed.

The urgency is to maximise the vote for Sam Gunning and ensure that Tim James is elected to the Legislative Assembly to replace the discredited factional former member, Gladys Berejiklian. A strong vote for Sam Gunning will aid our goal of Freedom Parties and Independents building a winning campaign structure to excel in the Federal election.

assist on the Willoughby polling booths from now until the election by opening the App and offering to spend some time on the polling booths.

The link below will enrol supporters directly into purposeful roles in the Willoughby campaign. Pre-poll voting is already happening and Election Day is Saturday 12 February. So please act now and scan or ctrl+click the QR code below.