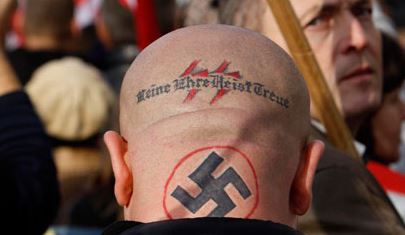 One of the most dangerous lies of our time, is the notion that any form of Nationalism or Patriotism is “Literally Fascist” and one slippery step from the Third Reich.

The following talk on this topic is given by an Israeli. Unlike many diaspora Jews, he understands the importance of a nation and a national bond.

He explains the difference between Nationalism/Patriotism and Fascism clearly and succinctly. There are also a number of other excellent points around the definition of evil.

He endorses the old school Christian view of the devil as a “devilishly” handsome person who tempts people by appealing to them.

By contrast, the newer Hollywood villains like Voldemort or Darth Vader have no redeeming features whatsoever.

This is an excellent presentation and well worth taking the time to watch.

Compare that to Diaspora Jewish commentator Ben Shairo talking about White Nationalism after the Charlottesville riots. Watch from 3.20 and then 15.10.

I actually have a lot of time for Ben Shapiro who is normally intelligent and intellectually honest. As soon as the subject of White people wanting to have their own piece of land to live on comes up however, he goes full meltdown.

He constantly intertwines any form of White Nationalism or White Identitarianism with White Supremacy or even full blown Nazism.

He manages the whole piece with a straight face, whilst wearing a kippah (skull cap). This is the man by the way, who once called for all Palestinians to be evicted from the West Bank.

Although he has since backed away from that, he recently told the Jerusalem post that “Even secular people in Israel have a nationalist identity and care about security and know Israel must be Jewish and democratic to survive.”

I am not critisizing his position on Israel. However, wanting nationalism for Jews in Israel, whilst considering it evil for White people in America is uncharacteristic hypocrisy of the grossest order.