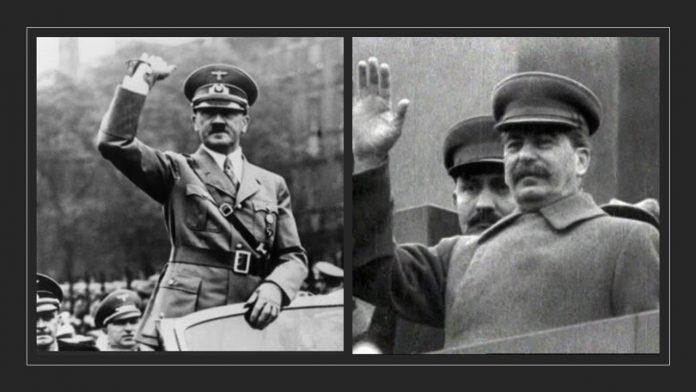 Did I ever mention that words are important? Did I tell you to watch out when people start re-defining words?

One of the greatest achievements of the Left in recent decades has been the redefining of the term “Right wing” to mean something that it patently isn’t.

I don’t know about you folks, but people look at me real funny when I admit to being on the far right of the political spectrum. They seem to expect me to goose stepping around the room at the slightest provocation.

I just smile inside, because I know that these people have no idea what I mean by “Right wing.” However, since we are unashamedly Right wing here on the Richardson Post, I think I should take the time to explain it, in a way that I wish it had been explained to me.

By the way, in case you are wondering, I grew up considering myself Left of centre until I finally figured this out.

The first thing you need to know is that the ideas of the Left and the Right are underpinned by two opposing ideologies: Capitalism and Socialism.

What most people fail to understand however, is that these ideologies are not economic systems. At their roots, they are moral systems.

The point which separates these two systems is the issue of property rights. The extreme Left believes that the Government has the sole right to everyone’s property; particularly “the means of production.”

The extreme Right believes that each individual has the right to own property and that it is the job of the Government to protect property rights at all costs. Although this has immense economic consequences, at its heart, this is a moral distinction.

Left wing morality insists that allowing people to own property is unfair because the wealthy will just buy up everything and oppress the poor into servitude and poverty.

This idea has strong roots in Christianity which commands that “thou shalt not steal.” This statement is bolstered by Jesus’ emphasis on telling the truth (it’s hard to steal without lying about it).

Let’s take an example by going right back to basics. Let us suppose that we live in a Right-wing nation and that I own a piece of land. It doesn’t matter how I came by this land; I just own it. I also have some money.

So, I am faced with a choice. I can spend the money on beer and loose women, or I can invest the money to produce something of value. In essence, I can be a consumer, or I can be a producer.

In this hypothetical case I decide – against my better judgement – to eschew the beer and loose women and to spend the money on cabbage seeds and shovels instead. So, I dig the ground, clear the weeds and plant the seeds.

Then, for the next 6 months, I water the ground, fence it off to keep wild animals out, pull out weeds and spray for pests.

At the end of the 9 months, I get out in the hot sun and harvest a semi-trailer full of cabbages.

The question dividing Right and Left is, “who owns the cabbages?”

According to Far-Right wing morality, the cabbages are entirely mine since I put my own time and resources into growing/producing them.

Far Left wing morality says no, no, no. These cabbages should be distributed amongst the people by the Government. The ones who are most in need, should get the most cabbages.

Before we try to answer the question of who owns the cabbages however, it is helpful to look at what I am going to do with them. After all, there is only so much Sauerkraut a man can eat before he goes stark raving mad.

Naturally then, I will keep a few for myself and most likely exchange the rest for something else that I want.

Now according to respected economists, a trade involves two people, a buyer and a seller. I disagree. A trade such as this requires three people: a buyer, a seller and a man with a gun.

Why do you need a man with a gun you may ask? Well, because one of the men involved in the trade may have a knife and decide to take the other man’s property without paying for it.

In a Capitalist (Right wing) system, the man with the gun is there to see that the trade goes ahead, with the property rights of each party being respected.

The sixty-four million dollar question of course is: “what is in it for the man with the gun?” What does he get out of it?

In a society like ours, the role of the man with the gun is played by the Government. Whatever weapons you may have, the Government has bigger ones.

They can belt you with a truncheon, they can taser you in the private parts or they can shoot you in the head. Heck, they can even stick a sidewinder missile up the tailpipe of your Holden Barina if the situation calls for it.

The answer to that question, for most of human history, has been – no-one. The normal state of affairs, was for the king/queen/dictator/tyrant to do pretty much whatever they wanted. If you had an army, the only people who could tell you what to do, were people with bigger armies.

This system is what we call feudalism. The peasants did as they were told if they knew what was good for them. The ruler (the man with the gun) reaped most of the benefits, unless he was bumped off or invaded.

Then, around a thousand or more years ago on a cold and wet island off the North coast of Europe, an idea began to develop that the leader should not have absolute power.

Instead, he would be restrained somewhat by laws. These laws were developed by independent courts of law that arbitrated disputes and built on previous cases (precedents). This body of legal cases developed into English common law.

There was a serious setback in 1066 when those bastard Normans invaded.

However, the seeds of freedom continued to sprout and eventually, King John managed to make himself so unpopular that the Barons raised a large army and forced him to sign an agreement called “The Magna Carta” which limited his power.

It also limited the power of the king’s bankers to squeeze their customers, a lesson Australia could follow today.

Although it was only a baby step in the right direction, it proved an inspiration, and slowly but surely, the idea of limiting the power of the rulers began to gain traction. The idea was popular with the people of course – but with the rulers, not so much.

Yet against all odds, the great unwashed managed to roll back the power of the elites, in England at least, and in the countries which they colonised/invaded.

The result was that for pretty much the first time in history, commoners had the rights to own their own property and the rulers would use their power, not to take that property away from them, but to protect their person – and their property rights.

These property rights meant that ordinary people were free to produce cabbages and exchange them for other goods and services, like beer and romantic favours.

This system is known as “Capitalism,” and lots of powerful people don’t like it.