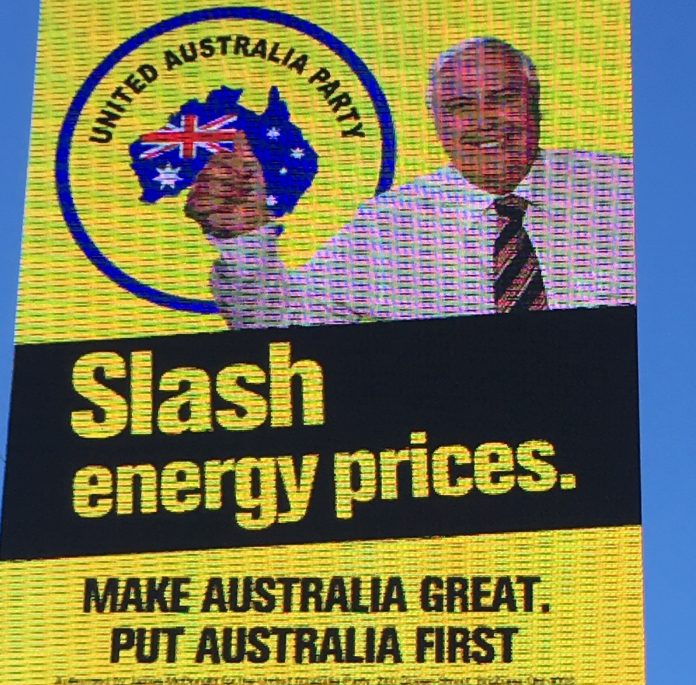 I Feel an Election Coming On

Well, the Federal election is hurtling towards us and it’s shaping up to be a cliff hanger with Morrison making a late charge towards the finish line.

One of the things which is really starting to show through in the Western world is the disintegration of the traditional two-party system.

As in the UK, where Theresa May seems determined to spit in the face of her supporters, here in Australia, more and more people are becoming disaffected with “business as usual.”

This has led to a swag of independents, which by and large is probably a good thing. However, one of the strangest, and I think most worrying, of the new minor parties is Clive Palmer’s United Australia Party.

Here we have a man, with an almost insatiable appetite for power and donuts, spending tens, if not hundreds of millions of dollars on an advertising campaign which features him holding his thumbs up.

Sadly, but inevitably, this is actually gaining traction and he will probably get a significant portion of the disinterested vote.

Clive Palmer is probably out spending every other political party in Australia combined. No matter how unappealing he is, that is bound to translate into a degree of political success.

Where is Palmer’s Money coming from?﻿

Two questions have been bugging me about this. Firstly, where did he get the money from, and secondly, why is he spending so much of it on a political campaign.

His last tilt at politics was pretty much a total disaster, with his candidates disappearing quicker than Crispy Crèmes from his lunch bag. Palmer himself was elected but then pretty much gave up, allowing his seat on the Sunny Coast to go back to the Liberals.

He spent barely more than half of the sitting days in 2015 in Parliament and didn’t set foot in his electorate for seven months at one time.

By this stage, his fortune had shrunk from 5 billion to just over 1 billion. In 2016, his nickel refinery went into liquidation and he either couldn’t, or wouldn’t, pay the employees and contractors who were owed money.

In April 2017, he announced that his political party would be wound up and he would retire from politics.

At the end of 2017, Cloive was awarded a $200 million royalty payment by a Chinese company who lost a court case against him. A few months later, he suddenly decided to resurrect his party and re-enter politics.

Why did he suddenly change his mind? I honestly don’t know. I have never met Clive and haven’t followed him closely. However, something has been niggling at me ever since he started his tilt to get back into Parliament.

Just supposing (and I have no evidence to suggest that this could be true) that the Chinese Communist Party decided that they wanted to take control of Australia.

Rather than face the expense and bad publicity of invading us militarily, suppose they decided to just bribe their way into power.

What if they just looked around for some dodgy entrepreneur with political connections who they had dealt with frequently. Suppose for instance, they promised to throw in the towel in a legal dispute, which would net the said entrepreneur a great deal of money.

I’m sure they could funnel a lot of cash to him in other ways too. Prime contracts, pork barrelling, brown paper envelopes – you know the story.

$200 million dollars is chump change to the Chinese leadership. Yet that kind of money might be enough to give Clive the balance of power in the Australian Federal Parliament.

Suppose Clive does hold the balance of power? Suppose that in return for passing any legislation, he insisted on massive immigration from China? Suppose we had one million Chinese migrants per year for the next four years.

China would hardly miss such a small number of citizens but if they all settled in marginal electorates, and if they were all loyal, handpicked Communist Party stooges, they could pretty much take control of the Australian Government at the next federal election.

The Chinese community in Bennelong were largely successful business people. Voting Labor went against their economic interests. I can only assume that in return, they were promised support for their ethnic interests by Kevin 747 and his cronies.

Those Chinese votes unseated a sitting Prime Minister and it served him bloody well right. Howard was a great enabler of mass Third World immigration, despite appearances to the contrary. Admittedly, he was better than Kevin and Julia on immigration, but that is a pretty low bar to hop over.

Perhaps this is all just meaningless speculation. Probably Clive has his own reasons for returning to the trough. However, there is nothing to say that this couldn’t happen – or won’t happen in the near future.

That is the fatal flaw in democracy. It doesn’t work in a multi-cultural or multi ethnic society with open border policies. In fact, it becomes downright dangerous.

So, do we ditch democracy, or do we ditch multiculturalism and open borders? Or do we just hope that the Chinese aren’t still smarting over the Opium Wars and the losing of Hong Kong and Taiwan? Maybe a Palmer win would lead to the slashing of energy prices – for China.