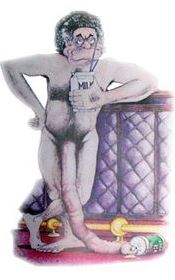 Former PM Bob Hawke passed away yesterday. Whatever else you may have thought of Hawkey, he was certainly an outlier as far as Prime Ministers go. He was a true larrikin and stood out from the usual stuffed suits who have filled that position before and since. Larry Pickering knew him personally and had a lot of time for old Bob. Prior to becoming PM, Bob swore himself off alcohol and claimed he would instead start drinking milk. Larry then penned the above cartoon which captured the moment with his usual irreverent hilarity.
In 2014, he wrote the following story about his time with Bob Hawke and published it on his Facebook page:

BOB THINKS IT LOOKS NICE OUT

So good ol’ Bob Hawke had a predilection for getting his gear off? Hmmm, tell us something we don’t already know. Bob always thought it looked better out after a few beers and the stories are many and quite comical, particularly those emanating from my old drinking hole, the ANU Bar at closing time, which was any time the next day.

At a Canberra Press conference Bob had sworn off alcohol in preparation for his stint as PM and I recall a cartoon I drew the following day: Bob was reading the headlines at breakfast with Hazel and saying, “Bloody hell, I must have been pissed saying something like that!”

As likable as Bob was, he is, and remains still, an alcoholic. But you have to admire his candidness and his dedication to dousing the demon that stood between him and high office.

But Bob was never a nasty drunk, he was funny and adventurous when tanked and how he remains alive is a still a mystery. Often, after Bob had quaffed his 17th beer at the ANU bar, his clothes had disappeared and he was scrambling on to the roof warbling “Solidarity Forever”.

No-one could coax him down except for the members of the local Canberra fire brigade who promised never to disclose the regular incidents, and they never did.

After another late session on the slops, and again without a stitch on, Bob had decided to go swimming in the ANU fish pond. It was a well executed dive but unfortunately the pond was no deeper than six inches and Bob had left half his chest and thighs on the concrete base.

He was a bloody mess but apparently had felt nothing as he conducted an interview on Channel 9 a few hours later, with his eyebrows independently moving up and down in earnest thought.

How times have changed. I can’t imagine the Press ignoring any similar antics performed by PM Abbott. Hmmm.

Whitlam the Complete Opposite

But Whitlam was a different kettle of fish. He was the inscrutable egoist who never duelled with the demon drink and never ventured where we mug lairs go.

He even sued me for drawing a tiny donger on his flabby frame. I always drew Gough covered in band-aids and his donger on the yearly calendar was no exception. But he had claimed the band-aids suggested a social problem and was determined to drain me of $500,000.

He eventually dropped the writ. Apparently Gough was not as keen as Bob to expose exhibit A to a full courtroom.

[Gough actually threatened to sue Larry over that cartoon. Larry couldn’t believe his luck and insisted that if Gough were to sue him for drawing his old fella with a band aid on, he would have to drop his dacks and prove in court that it wasn’t damaged goods. Whitlam declined to proceed and the case was dropped- Ed]

It’s a shame media have lost the art of reporting rough and tumble politics. But to be fair they have recognised the gravity of someone who may have punched a wall some 35 years ago.