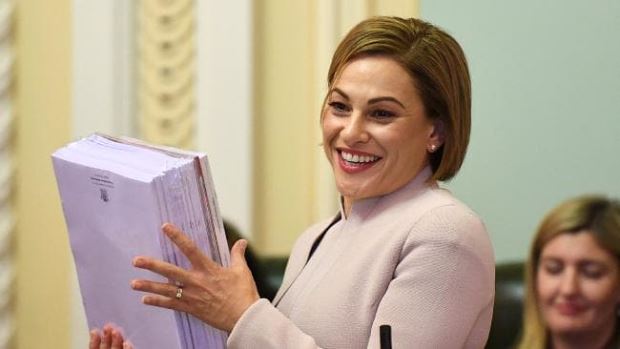 Do Queenslanders still remember Campbell Newman’s premiership? Poor old Campbell took on the job with a determination to slash waste and cut Government spending. He did a bloody good job of it too. What thanks did he get for it? Zip, nada, none whatsoever.

The courier mail, the Guardian and every other left-wing rag (which is all of them) absolutely panned Newman. They painted him as a heartless and grasping, with no care for the less fortunate. This successful smear campaign saw him lose Government after just one term. When he left, the State’s finances were in infinitely better shape than when he arrived. Not only that, but the ongoing costs were slashed too.

As soon as Anastacia Pallachook took power, she did the opposite of what Campbell had done. She went on a hiring spree, stuffing the public service with useless bureaucrats who wouldn’t know their bum from a hole in the ground. Spend spend spend has been this Labor Government’s motto – not surprisingly of course.

Jackie Trad, the lunatic that Pallachook has put in charge of our finances has just handed down another big spending budget. Most of the money she will spend will be gouged from hard working Queenslanders. Some will be gouged from big mining companies. That means that they will be far less willing to invest in Queensland in the future. So why do people keep voting for these clowns?

The answer is a four-letter word – debt.

Meanwhile, the banks get to lend the money. Where do they get the money from? They create it from thin air. Then, they sit back and rake in the interest. How good is that for a business model? It’s a win – win.

Who loses? Workers lose of course. We are the ones who have to pay this money back. 20 Billion f@#king dollars of it

There are only around 5 million people in Queensland. If you take out children, pensioners, housewives, the unemployed, carers, people on disability pensions and people on the Government’s payroll that leaves slightly more than a million full time employees in the entire state.

Think about that for a moment. 20% of the population is providing 100% of the tax revenue. Talk about the Pareto Principle on steroids. As someone once quipped, democracy is like two wolves and a sheep voting on what to have for dinner.

According to my maths, one million workers with twenty thousand million dollars debt means that Trad and Pallachook have spent around twenty thousand dollars in extra debt for each worker over the next 4 years. That works out at around $100.00 per week EXTRA for each worker. That is on top of the SEVENTY BILLION that we already owe.

Federal debt is much larger and is completely out of control, growing alarmingly under the coalition as it did under labour.

So why do people continue to vote for these sociopathic nutjobs? Why was Campbell Newman so unpopular and why haven’t Pallachook and Trad been tarred and feathered and run out of town.

The problem is, that banks are making so much money from this scam that they can afford to buy press, buy the economists and buy the Government. They don’t care what Governments spend money on, so long as they wind up in debt to the banks.

Unions go along with it because they want lots of workers in health, education and construction. These are the last bastion of Union membership. More Union members mean more union fees. Once again, this is a great business model. Nice work if you can get it.

The other problem is, that most voters are not going to be paying back the money. It is only those working in private industry. Queensland workers are working their fingers to the bone to pay for these useless elitist puppets and their banking overlords.

Tragically, most of them don’t even realise what is going on. They have no idea of the actual cost which will be transferred to them one way or another. The fake news media won’t be letting the cat out of the bag anytime soon either.

So how could we fix this broken system? It actually wouldn’t take much. A couple of fairly simple changes to the Constitution would do the trick.

The first change would prevent Governments from borrowing money without a referendum. They would need to go to the people for their agreement before putting them in debt.

Secondly, Government debt should be immediately transferred to each private sector worker equally. They are the only ones who have to pay the money. No point pretending that this debt is spread across the board. It isn’t. Pretending to take tax out of public sector workers pay packets is laughable. Their wages come from the tax take. They don’t contribute to that.

Thirdly, and this is the real kicker – no one should be allowed to vote in those referendums if they are being paid by the Government. Allowing people to vote themselves a payrise is immoral and unsustainable. The system cannot survive that in the long term.

So private sector workers will be the only ones voting on Government borrowing, and the only ones expected to pay it back. Good luck with raising taxes to pay for Pink Batts or Global Warming conferences when the people voting on it will be directly billed for them.

The rest of the democratic process can be left alone. What traffic laws or building regulations the Government wishes to pass affect everyone and the Government can be voted in as per the current system. However, giving these people a free reign with the public Visa Card is literally insane.

Maybe there are other, better ways to fix this problem. Unfortunately, the legacy media will never even admit to these problems, let alone consider sensible ways to fix them.

The Richardson Post is determined to discuss these issues which will never be aired in the “bought and paid for” mainstream media. We are finding it ever easier to grow and sustain ourselves, thanks to the many donations which have come in recently.

Some of these have been substantial (you know who you are) and we are deeply grateful for the vote of confidence in our mission. We are continuing to look at ways to improve our reach, our circulation and our credibility. By doing so, we can hopefully begin to roll back the power that these “vampire squids” have accumulated.

Thank you to all of you who are standing with us and have stayed loyal through our recent upheavals. We will continue to do our best to advance the interests of this great nation.

Another Brick in the Wall