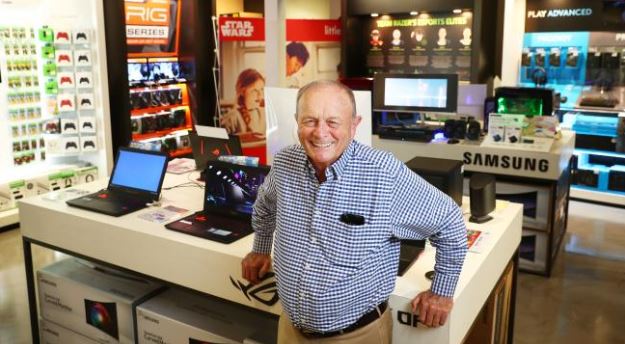 BILLIONAIRE shopkeeper Gerry Harvey is outraged after some of his stores have been the target of what police politely referred to as “shoplifting.”

Seven young men “of African appearance” just happened to be in a store at the same time when amazingly, they all suddenly decided to grab an armful of high-end electronic items and bolt for the exit at the same moment.

Then, these “lone wolves” just happened to go to another store, and another, and another. Talk about a coincidence!

Thank goodness it isn’t an “African Gang” problem. If it was, then people might start to question an immigration policy which allows hardly any White people to emigrate to this country.

Even Gerry Harvey might start to question the wisdom of this situation if he knew that this was part of the problem – No wait, he probably wouldn’t.

Mr Harvey has been a staunch supporter of open borders (at least for Australia) for a very long time.

He told News Limited that: “It was obvious to me [since] university. Australia is going to become an Asian country, 100 per cent for sure. It’s just a matter of when. You might have close to four billion Asians in the world, where do you think they’re going to live?”

Well obviously not in Asia of course. They will all have to come here to Australia and we will just have to hand the place over.

What a loser’s way of thinking. This country can be easily defended, all we need is a few nuclear devices.

When Gerry was just 4 years old, a bunch of Asians from Japan actually were planning to come and take over. Fortunately for him, a whole lot of White Aussies were determined to stop them. Many gave their lives in the most horrific of circumstances. Why did they do that?

Well, perhaps it was the estimated 300,000 Chinese that the Japanese murdered in Nanjing. Perhaps it was the 20,000 women, including some children and the elderly who were raped. Many of those women were reportedly murdered straight after the rapes by being gruesomely mutilated with bayonets and bamboo spikes up their private parts.

Then, there were the death marches they subjected Australians to in Borneo.

Of almost two and a half thousand Australians, only 6 survived.

Mind you, I don’t want to single out the Japanese here. Compared to the Chinese, they appear to have been rank amateurs when it comes to killing Chinese citizens.

Mao’s Government took out an estimated 38 million of them, mostly through starvation though there was a fair bit of “direct intervention” as well.

During Gerry’s university years, while he was fantasizing of an Australia dominated by Asians, the Cultural Revolution was in full swing in China and the hideously brutal Korean war had not long ended and the communist nightmare was beginning.

As he was building his retail empire in peaceful and prosperous Australia, there were horrific stories of mass murder, torture, autocratic rule and endemic corruption in Russia, Vietnam, Cambodia, Laos, the Philippines, Burma, Indonesia, Pakistan and across most of the Middle East too.

In fact, it would be quicker to name the countries which were not run by murderous despots. Japan was one of the only standouts and it was effectively being run by the Americans.

Things have improved in recent times although we live in a world which is still largely dominated by the Western (ie White Christian) nations.

However as recent events in Thailand (where citizens rioted to install a military Junta) and more recently in Hong Kong have shown, freedom is not something that Asians have ever been able to take for granted.

It probably isn’t a coincidence that the least oppressive nations in Asia are the ones which were recently under British or American rule.

That isn’t to say that all Asians are bad people, not by a long way. But to welcome the idea that future generations of Australians will be ruled by Asians seems just bizarre to me. Why do these elites all feel this way?

Is it the lure of total power that Asian autocrats have long enjoyed? Is it purely the profit motive? I mean, even if people are brutally oppressed, they will still want clothes dryers and flat screen tellys.

Is it some fantasy that if employees demand a pay rise you could throw them in jail and sell their kidneys? I just don’t know, but the only advice I would have for Gerry, is that if you like Asia so much then “Go Harvey Go!”