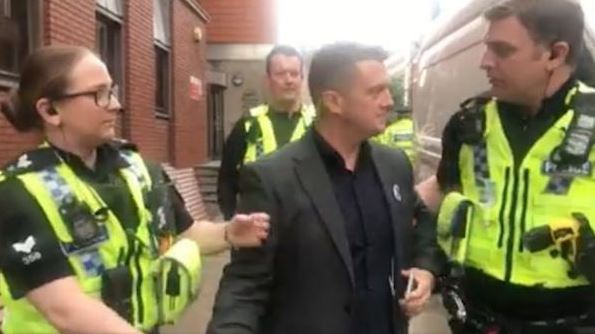 Tommy Robinson is being tried again on the Fourth of July. Isn’t that the day when Americans gained freedom from tyrannical British rulers?

Wouldn’t it be ironic if Tommy gained his freedom on the same day? Don’t expect the establishment to go down without a fight, however. These people play dirty.

What they have subjected Tommy to is mind boggling. That our system could be so comprehensively rotted out from the inside is beyond comprehension to people like me who grew up in England.

Where are the British press in all of this? Well, I can tell you where the Guardian are. They are still chasing round after “Robot Sex Man.”

They are supposedly leading the charge for “Social Justice.” Meanwhile they are missing in action when actual “Justice” is being perverted beyond recognition.

It doesn’t matter what the press thinks of Tommy Robinson. We all know they despise working class white males like him who won’t shut up and do as they are told.

This is bigger than just that, however. The issue involved speaks to a massive reduction in press freedom. It points towards a state which controls the press and in conjunction with giant tech corporations, controls all information.

Whether they like Tommy Robinson or not, everyone involved in the British press should be watching the following interview of Tommy by long time Richardson Post contributor Elsa Schieder.

The implications for journalists and news organisations are terrifying. So make a cup of coffee, plug in your speakers and enjoy. When you have finished, please share it with everyone you can.

Unfortunately, Big Brother will be attempting to shut you down so be careful not to put Tommy’s name in the title when you do share this.