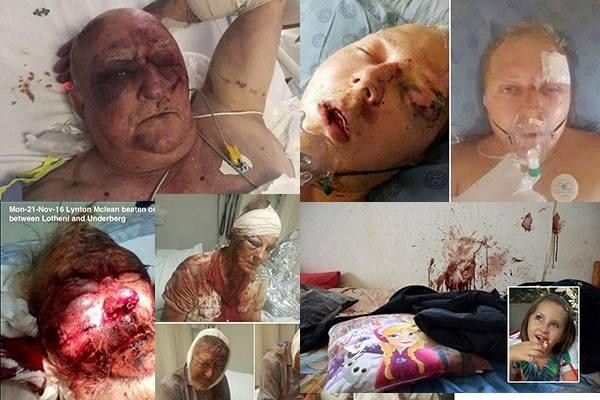 This author (I will  call her Susan) has asked to remain anonymous for now. She is terrified that this  story could have deadly consequences for her and her family. She is determined  to tell it anyway.

I am a Boer woman; a white South African born in the post-Apartheid era. I understand that the idea of Apartheid is very distasteful to many people in stable, Western, majority White nations.

I understand that people who lobbied their Governments to pressure South Africa into ending this practice did so from a sense of justice and decency. 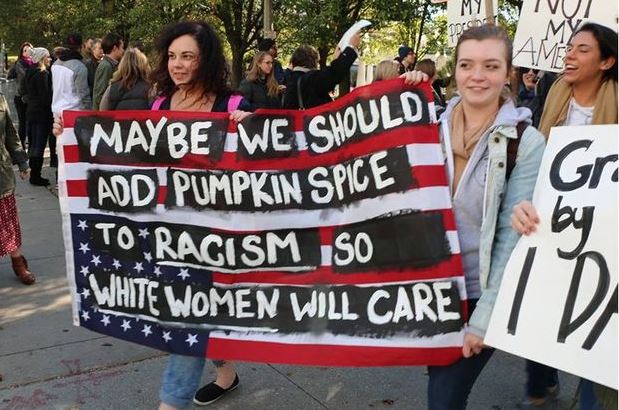 The word “Apartheid” is a Dutch word which means “separate.” The earlier Boer settlers believed that living peacefully together with the African Bantu tribes was not possible.

These tribes were moving down into South Africa around the same time that the Boers were moving inland and heading North. The original inhabitants were hunter-gatherers who were being displaced by Bantu tribes.

The Bantu-speaking peoples, which includes the famous Zulus, had primitive agriculture which mainly involved herding cattle, but they also had basic metal working abilities. They originated in central West Africa about 1,000 to 2,000 BC, in the area of modern Cameroon, about 4,000 km north of South Africa. As the Dutch farmers colonised the Cape, Bantu were still working their way south into Zimbabwe and South Africa. 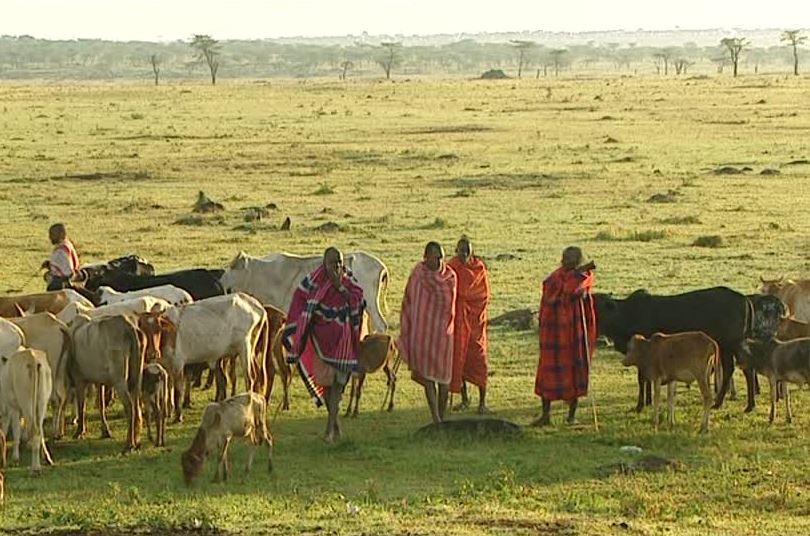 The Boers brought a more advanced technology and Christian culture. It was the Boers who through hard work and determination transformed South Africa into a modern, technologically advanced nation which was politically stable and economically successful., indeed by far the most prosperous African country.

These are my people, and I feel proud of their accomplishments and my heritage.

The Zulu and other Bantu who lived in South Africa were not treated equally with the Whites during the Apartheid era. To say otherwise would be a lie.

In most cases, the conditions that they lived under were far less appealing than those of the majority of Whites. There was discrimination in many different aspects of life due to whites seeking to keep control and maintain their cultural and economic standards. 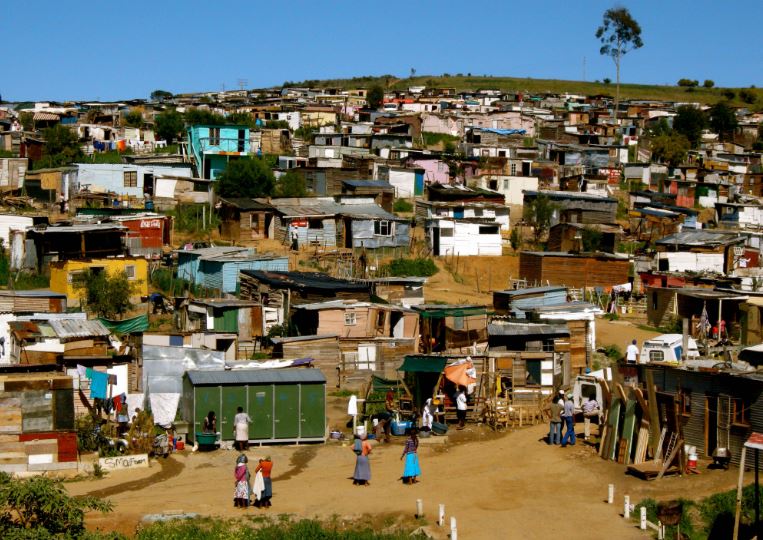 Since the Whites fled or were chased out of what is now called Zimbabwe, some 4 million Black Africans have had to flee from that country to South Africa. Currently, if you follow these affairs, more are fleeing into South Africa.

I say this because the situation in South Africa has always been complicated. The people there have often had to make difficult decisions with no easy option. Rather than a choice between good and bad, they sometimes had a choice between bad or terrible.

What may have seemed like a bad decision from far away; at the time may have been a pragmatic decision to choose the lesser of two evils.

To many, the ending of Apartheid appears to be the end of a bad system and the righting of a great historical wrong.

However, I would like to share the experiences of myself and my family during the last few years in post-Apartheid South Africa in the hope that it may show the world that these issues are not always as simple as they may seem.

Although I was born in the “Post-Apartheid Era”, I am paying the price for the wrongs, real or imagined, of previous generations. Since Apartheid ended in 1996, the government has instituted discrimination – affirmative action – on a massive scale.

White businesses must have black partners, and many whites have been forced out of the public service. White unemployment is high. In white countries affirmative action favours minorities, so the cost is distributed across a large population.

But in South Africa the majority is favoured at the expense of whites who are less than 10% of the population. Services and infrastructure are crumbling. At the same time, the currency – the Rand – is weak and the possibility of collapse is hanging like a dark cloud, making it difficult for the poor to escape. South Africa has become a powder keg.

I have been persecuted on a daily basis because of my ethnicity. In the last 18 months, the persecution has become unbearable – and it almost cost me my life.

White women do not drive on the roads after dark. The police are unable to control these masses and many decent policemen who have tried to arrest these troublemakers have paid with their lives.

These gangsters molest, rape and kill white woman at their homes, in their cars or at work. They use memories of Apartheid to justify their criminal actions; yet most of these thugs were born after Apartheid had ended.

They are fed propaganda about Nelson Mandela, the ANC, and the ‘struggle’, yet they never experienced Apartheid first-hand. 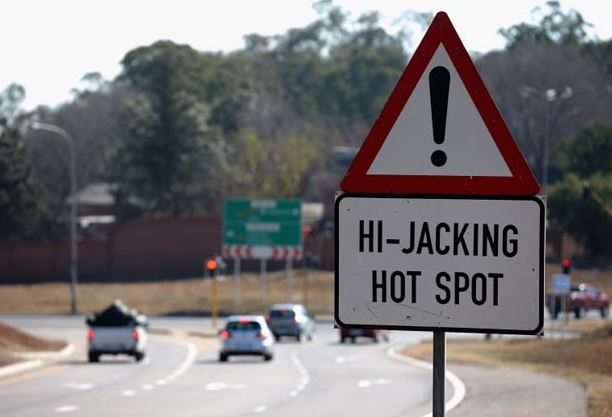 What I am about to describe to you may seem shocking. However, believe me, this is typical of what most white women are experiencing in South Africa today, and many have had far worse.

In June 2013, my husband was away, and I was supposed to be at home with my daughter. Instead, I decided to go out for lunch with my mother.

Upon arriving home, I found our house had been ransacked. Some valuables had been stolen and the thieves had left their faeces and urine in our clothes – as well as other outrages.

In July 2015, my daughter who was 3 years old at the time was grabbed by a black man from a supermarket trolley within a mall in broad daylight.

He rushed with her to a waiting getaway car in the parking area. Fortunately, due to the hysterical cries for help from me and my daughter, bystanders were able to get hold of her before the car took off.

Abductions of young white girls are common in South Africa. Many of the local Blacks are deeply superstitious and believe in something called ‘muti magic’.

This is the traditional sorcery still practiced there by witch doctors. They believe that raping and then killing a young white virgin girl will cure aids.

In order to complete the spell however, they need to take the dead body to the ‘Shangoma’, (witch doctor) immediately after murdering her. 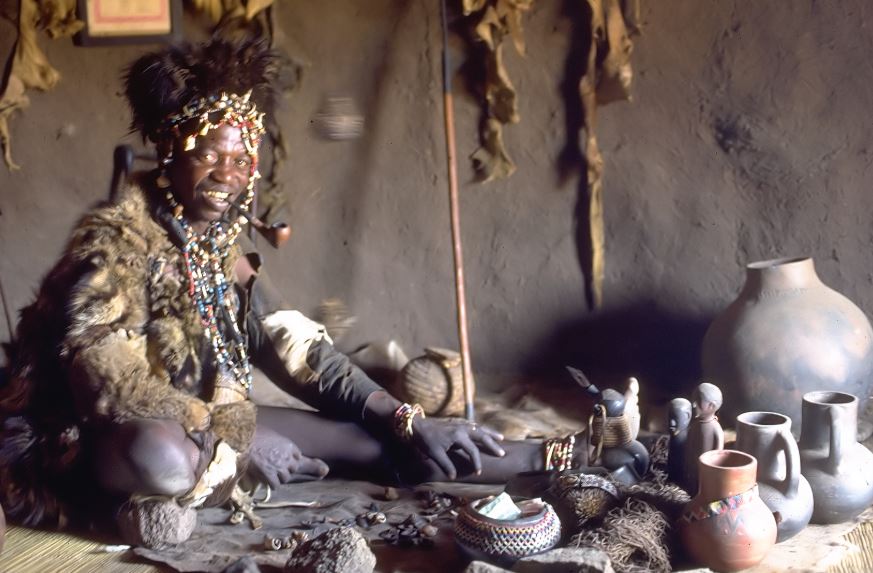 In November of 2017, I was on my way to drop the children off at school and was then planning to drive to work on the motorway.

An African male drove up next to my vehicle and started pushing me off the road. Eventually I was forced to slow right down.

At that point, he came next to me and made a slit throat sign and screamed, “We will kill you all, you f***ing Boers.”

I went to report it to SAPS and was told by the African police officer that it was ‘road rage’ and he couldn’t open a case.

In January 2018, my husband was driven off the road (motor way) and into oncoming traffic. He swerved to avoid the oncoming truck, but the African male driver wouldn’t move and hit his vehicle on the passenger side as he was pushing him.

At the same time, he was showing him a slit throat sign. He then sped off.

No arrests made, nothing was followed up.

In February 2018 I stopped at a red traffic light. My car window was slightly down. An African male walked past and next moment came back and stuck his hand through the window and grabbed my hair and pulled.

I managed to get the window up and drive over the lights to get away. No case by South African Police Service. Docket lost.

On the 18th of April 2018 – I was traveling back from a client in a residential suburb when I stopped at a stop sign. A brick smashed through my window leaving me disoriented.

Next moment an African male held a knife to my throat and screamed, “I’ll f***ing kill you white b****”. At that moment I realized this is not a hijacking or about what’s in the car. This was my life.

I grabbed his arm holding the knife and he pushed. He cut me across my collar bone and right shoulder, but I wouldn’t let go. He then repeated himself and punched me in my face (over the right eye). 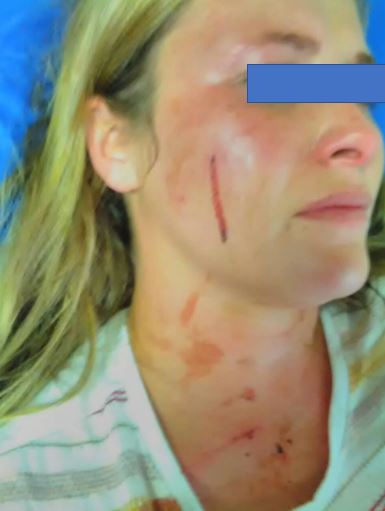 At that moment, by the grace of God, I managed to get the car into gear and get away. – no arrests made, no follow up.

Most white South-Africans have ’emergency kits’ ready and packed, with food and water supply, clothing and shelter to last for a period of 12 months in case full blown anarchy hits the country.

We sleep every night with a firearm under my husband’s pillow and the sound of gun shots down the road. Each morning we wonder whose turn is next. 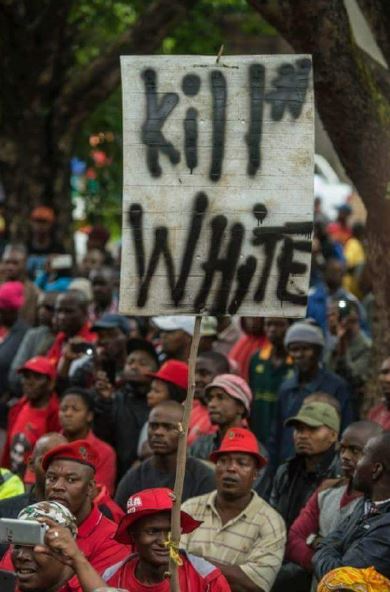 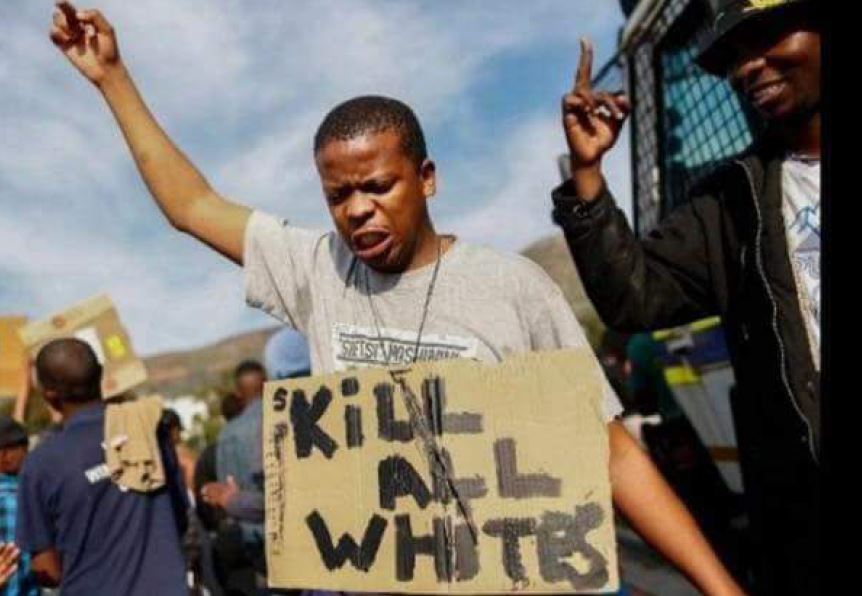 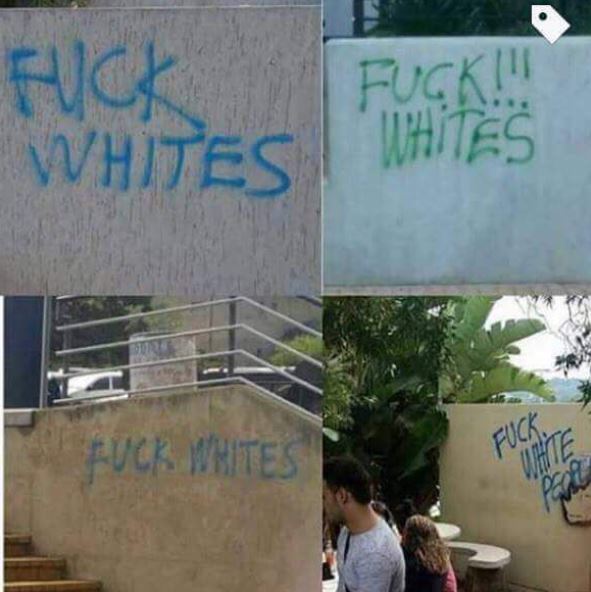 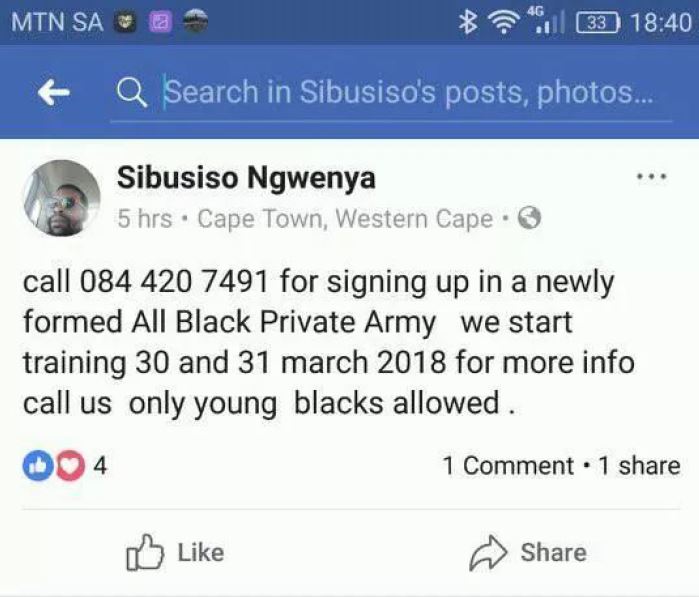 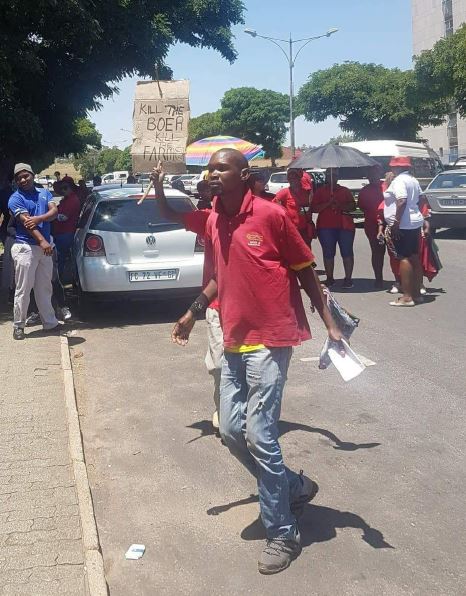 THE HUNT FOR AUSTRALIA’S MOST PROLIFIC MASS KILLER