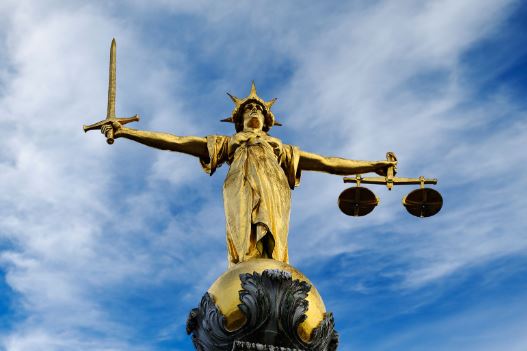 The image above is the statue of “Lady Justice” which stands on top of The Old Bailey courthouse.

I am completely blown away by this situation. Tommy Robinson has been tried at The Old Bailey which is the highest criminal court in the land. This court is reserved for “major criminal cases from within Greater London and in exceptional cases, from other parts of England and Wales.”

Obviously this must have been an exceptional case as it was from outside Greater London.

Right – so what was this case all about? Tommy was originally arrested for breaching the peace (which he demonstrably wasn’t). This rapidly morphed into interference in a criminal trial with actions which had the potential to collapse the trial.

It turns out that the trial he might have collapsed was already over and the judge was merely sentencing the perpetrators of horrific child rape and enslavement. Nothing he said could possibly have damaged the trial. The judge must have known that.

Notification of courtroom restrictions were not posted anywhere as they should have been and yet the judge put Tommy away within five hours of his arrest. Ten weeks later he was taken from the most horrific prison circumstances imaginable after the original trial was found invalid.

The prosecution grilled him apparently for the longest time about whether he had been “insensitive.” Since when was it illegal to be “insensitive” and who gets to make that call?

This case makes a total laughing stock of the idea of “British Justice.” We once had the fairest judicial system in the world.

Is it merely coincidence that Britain now has a Muslim in charge of its entire judicial system? Home Secretary Sajid Javid is a Muslim of Pakistani origin, the same as many of those convicted of participating in these hideous rape gangs.

Normally, I would be inclined to give Sajid the benefit of the doubt. I try to avoid conspiracies and conjecture; but in this case, the circumstances are becoming so bizarre that I think this is a legitimate question.

Tommy Robinson’s case breaks so many legal precedents that it is almost impossible to believe that there is not political interference involved.
Tommy’s activism has been aimed at the behavior of the Islamic community from the start. His criticism has been entirely reasonable.

If members of the indigenous English community had been murdering and raping Muslims, it would be considered quite acceptable for Muslims to complain about it. Why the hell does it not work the other way around?

Is this a personal crusade by a Muslim Home Secretary against someone who dares to complain against Muslims who are raping and killing English citizens? I think this is a question that the English need to be asking – even if it means risking imprisonment by the Muslim in charge of their legal system.

If non of this makes any sense at all, then please read my book The Story of Mohammed Islam Unveiled

Email me (harryyo@gmail.com) for copies in Australia for $13.00 inc P&P or purchase on Amazon Kindle in the UK here:

Write to your MP, the British Ambassador, the Queen or anyone else you can think of to register your disgust at this situation.

Also, share this article on every social media channel and email it to anyone you know in the UK – while you still can.

This is a very black day.

Mainstream media reporting on this trial. Thank God for The Richardson Post!