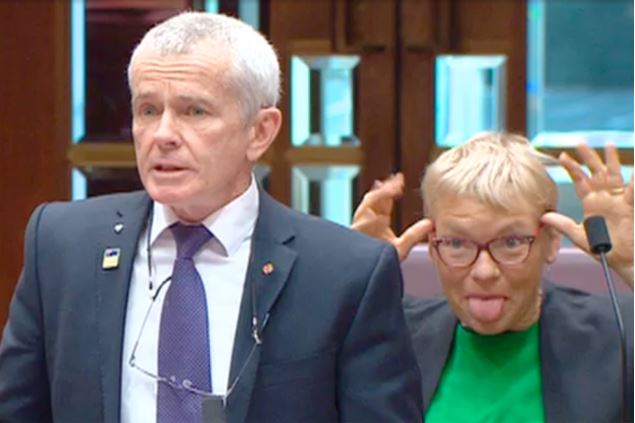 For the sake of readers not familiar with Australian politics, I would like to take this opportunity to introduce you to the esteemed persons in the photo above. The one on the far right is at the front, and the one on the far left is thought to be orbiting somewhere around planet Green – Houston, we have a problem.

If anyone out there is looking for a walking argument for the abolition of universal suffrage, you just can’t go past Janet Rice. She was in the Senate last week (actual people voted for her) arguing for the shut down of Australia’s second largest export industry.

There are those who think that her preselection was a cunning ploy by The Greens to make Sarah “Sea Patrol” Hanson appear a smidgen more lucid. Here at the Richardson Post, we had dismissed this as a conspiracy theory, although we are monitoring the situation closely.

Apparently, our Malcolm (Roberts) was less than careful with his words in the above debate. He was quoted as opining that coal did not cause “black lung disease.”

Clumsy speech writing to be sure. I assume that he actually meant to say that Respiratory diseases in coal mines can be reduced or eliminated with good management practices. Whatever Malcolm’s shortcomings may have been however, they pale into insignificance compared to the antics of Senator Rice.

There is a certain expectation of a level of dignity that a Senator should display whilst fulfilling their duties. To describe this as an epic fail would be to fall well short of the mark.

Meanwhile, The Australian newsrag is ignoring this display and running yet another hit piece on former Senator Anning. His latest crime? Not leaving his office before the due date to accommodate an incoming Senator’s wishes.

Of course, they dragged up his “appalling” maiden speech where he dared to talk about the rights and achievements of White Australians who built this great country from nothing in just a couple of hundred years.

The Australian is probably the most prestigious of this country’s old media. Unfortunately, this constant barrage of anti-White racism is dragging it into the gutter with the rest of the trash.

Meanwhile, In other news, scientists have started using journalists in scientific experiments. Apparently, there are some things which even rats won’t do.