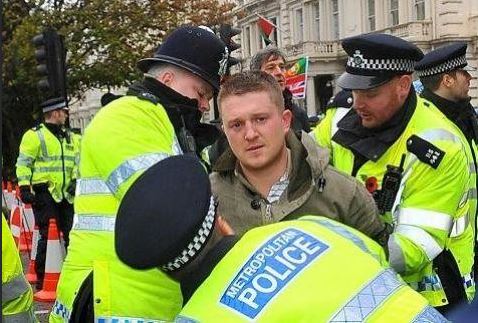 The headline may seem like hyperbole, but it really isn’t.  Tommy Robinson has been in prison before on several occasions since beginning a campaign of activism against extremist Islam in the UK.

The UK press is insisting that Tommy got what he deserved in this latest judgement but there are major failings in the UK legal system which they seem to be ignoring.

Considering that Tommy is working as a journalist, this may seem strange to say the least. Normally journalists might be expected to protect their own.

However, Tommy is not exactly “their own.” He is practicing journalism outside of their cosy cartel. He does not answer to their masters and is therefore free to pursue the truth outside of their ideological restraints.

Having said all of that, Tommy is unsophisticated. He can appear aggressive and belligerent in his manner. He tends to be provocative and refuses to back down in arguments. I can understand why he would be unpopular, particularly with the English who tend not to appreciate such characteristics.

In his earlier forays into journalism, Tommy seems to have rushed in where angels might have stepped a little more carefully.

I say this after sitting up last night wading through his appeal judgement and trying to make sense of what just happened. The mainstream press will not do this, so someone has to.

If you are so inclined, the appeal judgement can be found here:

In short, this case began with an incident at Canterbury court where an earlier case of Muslims raping English schoolgirls was being heard. There are numerous such trial going on around the UK at the moment.

After 30 years of ignoring this heinous crime, the British Justice system is now playing catch up and it isn’t pretty. These are not just rape trials.

This was sex slavery and trafficking occurring on an industrial scale. What’s more, it was happening under the noses of the establishment who flat out refused to do anything about it.

Not only did the legal system ignore this tragedy, the press were also complicit through their silence. Given the scale of what happened, it is almost impossible to imagine that they knew nothing, yet they never revealed to the public what was going on.

Getting back to Canterbury, Tommy went to the trial to report on it as a citizen journalist. He was unaware of the protocols surrounding such reporting. He attempted to film people inside the court. This is illegal. Apparently, there are signs warning of this fact within the court.

I assume Tommy didn’t see them. He has little incentive to break the law considering the treatment he has received in the past. However, ignorance is no defence in the eyes of the law, and acting as a journalist covering a court case, he should have been more careful.

The judge in that case brought Tommy in and he was tried for it. In the appeal, the judge notes that the law states that:

Tommy was given a sentence of three months, which was suspended. Whilst that may seem harsh, there is room for this within the law, although Tommy maintains that no journalist in (certainly recent) UK history has ever been imprisoned for endangering a trial.

In one case he quotes, a journalist actually collapsed a most serious trial, yet the only punishment was a fine for his publisher.

The judge in Canterbury noted quite correctly however, that Tommy was on a campaign and was at risk of reoffending. The appeal judge felt the sentence was justified for that reason, though it was incorrectly classified as if it were a criminal sentence.

That may sound inconsequential, but it had a serious effect on his subsequent treatment. The appeal judge seemed to imply that both judges made this mistake because people are so rarely charged with these offences.

In the second case (in Leeds), Tommy maintains that he made every possible attempt to abide by the rules. He had no wish to be imprisoned and so paid, from his own pocket to attend a course on Court Reporting which was run by a prestigious London law firm.

The trial was one of three connected trials which were being heard by the same judge. Reporting restrictions were placed on these trials to prevent jurors hearing evidence from previous trials which may have prejudiced their decisions.

Once the three trials had been concluded, restrictions would have been lifted and anyone would have been free to report on them. This was not a cover up and to claim so is incorrect.

The judge would have been concerned that jurors in the third case could have discovered from Tommy’s video that the people in their trial had previously been tried for the same crime. That is considered to be prejudicial.

The appeal judge felt that the Leeds judge was quite justified in his belief that Tommy was endangering the course of justice by his actions.

Once Tommy had agreed to remove his video from the public realm (which he did immediately once asked) then he posed no further risk to the trial however. He should have been bailed and the matter should have been referred to the Attorney General.

Instead, what happened next could at best be described as grossly unprofessional. The judge tried Tommy on the spot. He was denied the right to chose legal representation. The lawyer Tommy was given had no time to prepare a case.

The crimes with which Tommy was charged were not explained to him at all at this hearing, let alone “in a language which he could understand” as the law demands. Most damning of all, he was never given the chance to even make a plea (guilty or not guilty).

The trial seems to have lasted a matter of minutes, after which he was sentenced to thirteen months in prison. According to Tommy, any trial for a crime which carries a possible sentence of 6 months or more is supposed to have a jury.

He was again wrongly sentenced under criminal code, rather than under contempt which meant that the punishment was unfairly harsh in its application.

Having been imprisoned, he was suspiciously moved to a different facility which placed him in mortal danger due to it having the highest population of Muslims of any prison in the country.

Whoever was responsible for that decision should be on trial for reckless endangerment.

In his latest trial, Tommy’s defence has been that the reporting restrictions on the Leeds case were not published where they should have been. In fact, they don’t seem to have been publicised anywhere.

He claims that he proved conclusively that this was the case (and this is backed up by Ezra Levant who was in the court), yet he was still convicted.

His crimes were apparently:

Livestreaming video outside the court

The first two are essentially the same crime but the third is clearly a trumped-up charge. Tommy’s own treatment by the press at this trial proves that. After all, who gets to define “aggressively.”

Tommy is now at the mercy of the British Prison Service. Considering what happened last time, may God help him. There is every chance that he may be deliberately put into a situation where he will be killed by Muslim inmates.

From what I could find about this case, it seems as though there are still large sections of the British legal system which retain procedural integrity. However, this is undermined by personal animosities and political interference.

The net result for Tommy is personal torment beyond belief and a situation which is now life threatening.

The root cause of this entire sordid episode – not just Tommy’s treatment, but the industrial scale sex trafficking of schoolgirls – is entirely due to an establishment in the thrall of radical political dogma.

Powerful elements of the British establishment are determined to remake the UK as a multi-ethnic and multicultural society. They have no reason, no right and no mandate to do this.

They have no care for the chaos and tragedy that this has caused. They are also determined to do whatever it takes to shut down those, like Tommy Robinson, who stand up and expose their evil agenda.

We must keep the pressure on the establishment.

Write to whomever you think may have some influence in this case, Share this where ever you can – for Tommy’s sake, for our sake and for our children’s sake.

What a black day this is.