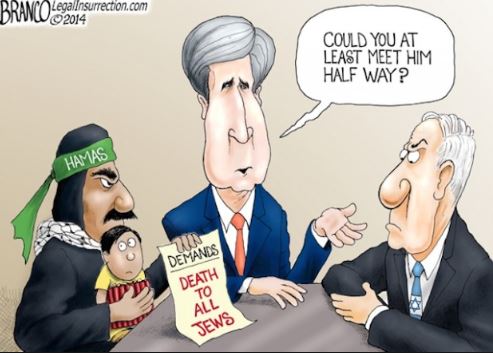 Those poor Palestinians are getting desperate. So desperate in fact that they are now recommending the killing of Jews. Oh wait, they were killing Jews anyway.

“All of you 7 million Palestinians abroad, enough of the warming up. You have Jews everywhere and we must attack every Jew on the globe by way of slaughter and killing, if God permits,”

I’m not sure what he means by “warming up.” Perhaps he is referring to the helicopter at the Munich Olympics full of bound Israeli hostages which the Palestinian terrorists tossed a hand grenade into, killing them all. That warmed them up that one.

Hardly unique or even especially cruel in comparison to some of the other atrocities. We shouldn’t, however, take the views of just one random Palestinian to represent the views of the entire nation.

Except that Fathi Hammad isn’t just a random Palestinian. He was a Cabinet Minister in the Hamas Government until 2014.

That is the same Hamas Government who were elected in a landslide by the Palestinian people when the Americans and Israelis rather stupidly asked them to choose their own leaders.

The expectation (by these idiots at least) was that the Palestinian people would vote for peace, jobs, good medical care and improved educational standards.

Instead, they voted for Hamas. That isn’t to say that Hamas hadn’t distributed some aid money to needy Palestinians. Although they hadn’t actually earned that money themselves, it appears that they embezzled less of it than the PLO’s political wing Fatah.

That seems to have granted them kudos with the ordinary Palestinians, yet it was hardly their raison d’être.

In fact, it barely gets a mention in Hamas’s famous Charter. The Hamas Charter makes all the same points as my book, The Story of Mohammed Islam Unveiled.

The main difference is that the Hamas Charter presents this murderous violence not as something undesirable, but as an imperative for all the World’s Muslims to aspire to.

A couple of paragraphs from this document:

There is no solution for the Palestinian question except through Jihad.

Initiatives, proposals and international conferences are all a waste of time and vain endeavours. The Palestinian people know better than to consent to having their future, rights and fate toyed with. As is said in the honourable Hadith:

“The people of Syria are Allah’s lash in His land. He wreaks His vengeance through them against whomsoever He wishes among His slaves It is unthinkable that those who are double-faced among them should prosper over the faithful. They will certainly die out of grief and desperation.”

The Hamas Charter can be read in full here. I highly recommend it. If you read my book first, it will make even more sense.

By “double faced among them,” Hamas, and the original Islamic Hadith, are referring to non-Muslims. That probably means you. It is not just referring solely to Jews – although they have been singled out for special persecution from the very beginning of Islam.

There are those among you of course, who still think that the Palestinian Arabs are simply fighting for their ancestral lands. If you believe that, I would recommend reading The Hamas Charter in full.

Alternatively, you could listen to a speech made by Fathi Hammad back in 2012 in which he is begging for free fuel from the Egyptians. Hamas weren’t able to purchase fuel, presumably because they had spent all of their generous foreign aid on payments to the families of suicide bombers and other worthy causes.

In his oration, he makes the following points:

Thus, the conspiracy is very clear. Al-Aqsa and the land of Palestine represent the spearhead for Islam and for the Muslims. Therefore, when we seek the help of our Arab brothers, we are not seeking their help in order to eat, to live, to drink, to dress, or to live a life of luxury. No. When we seek their help, it is in order to continue to wage Jihad.

Allah be praised, we all have Arab roots, and every Palestinian, in Gaza and throughout Palestine, can prove his Arab roots – whether from Saudi Arabia, from Yemen, or anywhere. We have blood ties. So where is your affection and mercy?

Personally, half my family is Egyptian. We are all like that. More than 30 families in the Gaza Strip are called Al-Masri [“Egyptian”]. Brothers, half of the Palestinians are Egyptians and the other half are Saudis.

Who are the Palestinians? We have many families called Al-Masri, whose roots are Egyptian. Egyptian! They may be from Alexandria, from Cairo, from Dumietta, from the North, from Aswan, from Upper Egypt. We are Egyptians. We are Arabs. We are Muslims. We are a part of you.

This is nothing startling to people who have been paying attention. Yasser Arafat was the leader of the Palestinian cause almost from the beginning. He fought a murderous campaign to get “his” land back. Funny thing was, he wasn’t even Palestinian. He was born in Egypt.

And while the Arabs are insisting that the Palestinians can’t possibly live on any land except “their” land, most of the rest of them are desperately trying to get the hell out of “their” lands and settle in Europe, America or Australia.

So, if they aren’t really fighting for “their” slither of land (the whole of Israel is the size of New Jersey), then what are they fighting for?

The clue is in the phrase above. “Al-Aqsa [Jerusalem] and the land of Palestine represent the spearhead for Islam and for the Muslims.”

Prominent Palestinians have made it clear in the past that conquest of Israel is simply a stepping stone. Once accomplished, Europe (and the West generally) will be the next target. This is entirely consistent with Islamic Doctrine which these people follow religiously (so to speak).

Most Jews have very sensibly resisted this attack. They have closed off their borders, restricted immigration to only Jews and worked hard to increase the proportion of Jews in Israel. They wish to keep Israel as a predominantly Jewish ethno-state and who can blame them.

The Arab Muslims have the rest of the Middle East and North Africa. This is a gigantic patch of land similar in size to the entire Continental USA. The Arabs are not being replaced on that land. They are free to enjoy their own language and culture. They can live amongst their own people and pursue their own destiny.

Admittedly, these countries are mostly what Donald Trump would describe as s@#t holes but that is hardly surprising. Shortly before being conquered by Muslims and adopting Islamic culture, these nations were the most civilised and sophisticated in the world.

Anyone who has read my book would understand what happened. Islamic culture is a toxic, militaristic blight on humanity. It is designed to persuade its followers to wage near constant warfare on various levels with the sole aim of world domination.

It is a culture which has never produced anything of measurable value. Jihad is its primary purpose. Poverty and environmental degradation are its awful legacy

Many years ago, the Persians and the Byzantines wore each other out fighting. Islam came through and conquered them both in their weakened state. Today, these once great lands are a blight on the world.

We need to learn the lessons of history – and quickly – lest we go the same way.