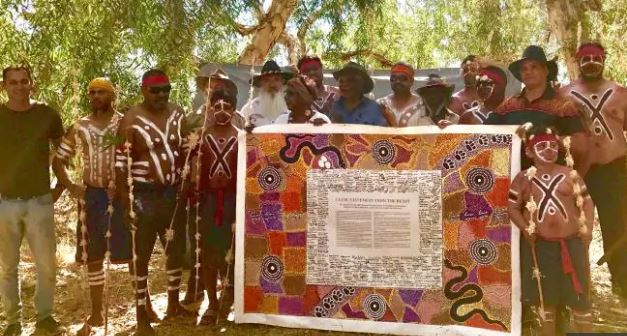 I don’t know about you guys, but this “Voice” thing is scaring me. The first thing that raises the hairs on the back of my neck is the name.

I think I might have felt more comfortable with something like “Vampire Squid.” That sounds less like a talent show and more like a bunch of blood sucking ambulance chasing lawyers and lobbyists ruthlessly bleeding the hapless Aussie taxpayer for anything they can get out of him/her/zer.

Maybe I’ll be proven wrong – but that is what I expect this will turn into if it ever does get off the ground. Thank God for ScoMo. He may have his faults, but he appears to be putting up some resistance at this stage.

How long that fortitude will last when the Murdoch press is promoting this “Voice” like their lives depended on it, is anyone’s guess. Maybe he has more spine than we gave him credit for. Let’s keep our fingers crossed.

This whole “Voice” thing was concocted under The Post’s favourite Prime Minister Julia Gillard. In between knifing Kruddy in the back and donating massive swathes of taxpayer funds to the Clinton Foundation, she found the time to set up this “expert” panel.

The funny thing about this panel of “experts” is that the only people who didn’t have a voice were the traditional Anglo-Celtic Aussies whose forefathers founded and then built this nation.

Sure, there were a couple of tokens on the panel, but they were not advocating for “White” Aussies or our interests. They were advocates for the Multicultural or Aboriginal industries.

Which just goes to show where traditional Australians are in Australia’s ethnic pecking order: a distant last.

You wouldn’t believe it of course if you were watching or reading any of our mainstream press. They love to pretend that Whites are totally in control of all levers of power in this country – what a joke.

Well, we may not have a voice on “their” ABC, SBS, News.com, the Guardian or any of the rest of the mainstream press, but at least we can still say what we think on The Richardson Post (till Nurse Ratched comes back on the ward at any rate).

I don’t want to dwell on what’s already happened mind. I want to look at what we should expect to see before we vote for this racist pork barrel.

How about, for a start, this “statement from the heart” defines what an Aborigine is. After all, that might sound obvious to you smart people, but for deplorables like us – well, we are confused by the whole thing.

I mean, obviously someone whose ancestors were all here before Captain Cook arrived, is Aboriginal. But we get confuddled by this idea that Aborigines are all portrayed as oppressed and exploited while the Whites are all oppressors and exploiters (apparently).

So, if that is the case, how do we classify someone whose father is Aboriginal and whose mother is English? Are they an oppressor or are they oppressed? Are they Aboriginal or English? This isn’t just Black or White.

Supposing a person was 63/64ths White and relatively wealthy. Surely, they must be more oppressor than oppressed? Or are we still to class such a person as Aboriginal?

Would “The Voice” be looking after the interests of this “marginalised” person on the basis of a few indigenous chromosomes or are they only advocating for Aborigines who are below average income/net assets and more than 50% black?

And while we are at it, how about an accurate costing of how much we are currently spending in order to “close the gap?” I have heard a figure of 30 Billion dollars bandied around.

Is that true? Who knows, but it’s about time the Government came clean on how much the Aboriginal industry is consuming right now before entering into more open ended financial commitments on our behalf.

What a crock this whole thing is, but one thing’s for sure. If the Government can’t or won’t give us a clear definition of who is Aboriginal, then why should we support a change to our incredibly precious Constitution to supposedly protect them.

This “Voice” smacks of yet another racist attack on the traditional Anglo Australians and I don’t think that will be good for any of us, whatever our ethnic background.

Reasons to be cheerful

Want to see a truly disadvantaged person? This is Ian Dury, singer for ‘70s punk/new wave band Ian Dury and the Blockheads.

Contracting polio at age 7 he was locked in a broom cupboard at school and forced to learn 50 lines of poetry for days on end.

Never one to whinge (he was a Pom after all) he would perform on stage with his sticks and leg irons, belting out some of the most amazing lyrics. Years before Rap music came to fame, he was showing Snoop Dog and the rest how it was really done.

When “The year of the disabled person” was declared, he wrote and recorded Spasticus Autisticus in disgust which contained the following lyrics:

So place your hard-earned peanuts in my tin

So long have I been languished on the shelf

I must give all proceedings to myself

No one needed to give this guy a voice. If they had tried, he would have told them where to shove it.