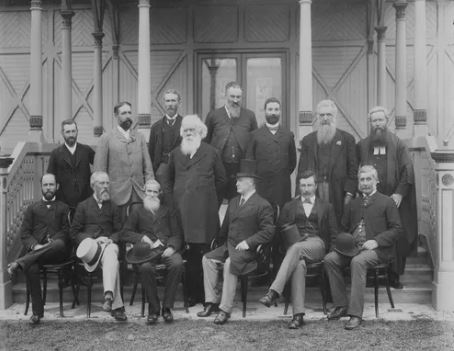 Continued from Part One

The Australian is currently in full “Treaty” mode, wheeling out corporate tax minimisation lawyer Mark Liebler to spruik this constitutional vandalism by any means. I thought therefore that I should point out a few more reasons why we should not have a bar of this insanity.

In his latest piece in The Australian, Liebler mentions the “constitutional convention debates of the 1800s, from which Aboriginal and Torres Strait lslander people were entirely excluded.”

That is because we were the only people to have a constitution at that time and we had been for centuries. The idea of a constitution goes back to the Magna Carta as a document to restrain the power of the English king or ruler. No other society on Earth had such a notion.

The Aboriginal people of Australia certainly hadn’t. When the English arrived shortly before the French (luckily for the Aborigines) they were living an extremely primitive hunter/gatherer existence.

They had not advanced as far as tribalism. They did not have tribal chiefs. Their communities were extensions of family groups.

That these people were not brought in to help shape the Constitution of the new Commonwealth is hardly surprising. There were things which the Aboriginal people did very well. They are still the world’s greatest trackers.

They are not, however, renowned as constitutional experts which is hardly surprising as they had not developed a written language prior to the arrival of The First Fleet.

Of course, the Aboriginal people were here before Europeans. Of course, we should acknowledge that fact, and we do.

Unfortunately, acknowledging this fact constantly, and telling our children that this land belongs to the Aboriginals at every school assembly, has not led to a single measurable improvement for a single Aboriginal person anywhere.

Neither will it ever. Why should it? What evidence is there that lack of Constitutional recognition has ever been responsible for harming Aborigines. The Constitution is a document which protects all of us, including Aborigines from Governments and their bureaucracies (including lawyers).

The British people were never mentioned in the Constitution and it never held us back. Neither were the Indians, the Chinese or Jewish people. Yet these people seem to be doing just fine. So why is it considered to be holding back the Aboriginal people.

The Constitution is a non-racist document for a non-racist form of Government. Of course, racism exists in Australia as it does in every other nation in the world. Mark Liebler, however, should know better than to try to inject racism into our Government.

The basic argument of Liebler and other ethnic advocates is that because Aboriginal people on average are worse off than Whites in a number of ways – that it must be the fault of the White Christian majority.

“Closing the gap” then becomes the catch cry for a never-ending demand for more power and resources for Aboriginal people and their advocates.

Before we attempt to close this gap, let’s just stop for a moment and look at a couple of actual, well documented reasons (other than racism) why Aboriginal people don’t prosper as well as others in an advanced technological society.

Health is one area which is constantly wheeled out to make us feel guilty. Aborigines are generally less healthy and have lower life expectancies.

There are a number of reasons for this unfortunate fact which – unlike racism – can be proven to contribute to poor Aboriginal health outcomes.

Europeans have been growing crops and domesticating animals for millennium. Our digestive systems have evolved to deal with a modern, rich diet. Aboriginal people haven’t developed this way, which is why they suffer more from such ailments as diabetes.

Another thing they have never developed tolerance for is alcohol. Over thousands of years, Westerners have developed enzymes and other biological systems to deal with alcohol. We have also developed cultural and behavioural norms.

Despite this, alcohol still causes problems for us, and is a leading factor in preventable deaths, injuries and health problems.

Aborigines like many other non-European groups suffer far more from the effects of alcohol than we do. This is deeply regrettable, but It isn’t racist.

It isn’t something that can be cured with more money or recognition in the Constitution. Giving more money to people with alcohol problems is not smart. The only way the Government could have an impact on this catastrophe is through coercive restrictions on Aboriginal alcohol consumption.

The Uluru gabfest delegates, and their lawyer friends were eerily silent on that proposal. There are numerous other factors which weigh on Aboriginal health outcomes. Poor hygiene, violence, substance abuse, foetal alcohol syndrome to mention just a few. Not one of these factors will improve with constitutional recognition.

The other oft quoted measure of Aboriginal disadvantage is in educational outcome. Aboriginal people tend to perform poorly when compared with non-Aboriginals. Of course, the woolly mammoth in this particular room is IQ.

Aboriginal people have lower average IQ than that of Northern Europeans. There, I’ve said it. This is a well-researched but studiously avoided fact. It is not surprising that it is ignored.

Acknowledging it would be far less lucrative for the Aboriginal industry, because it would undermine the sanctimonious claims of racism by the fanatical leftists who currently control academia.

Yet if these people actually cared about improving the lives of Aboriginal people, they would face the truth and find the best ways to deal with it.

Imposing a curriculum designed for Europeans onto a group of Aboriginal children is a recipe for failure and despair. By refusing to acknowledge the truth, we are setting them up for failure.

That is the cruel reality of these Aboriginal advocates. They seem fixated on programs which will never fix the problem but will keep the money flowing to themselves.

The Voice is just one more of these seemingly empty gestures which will almost certainly turn out to be a revenue black hole into which ever more hard-earned taxpayer dollars will be pointlessly dumped. I think it will turn out to be much more sinister – but that is for another time.

The wheels are falling off the Bill Shorten train