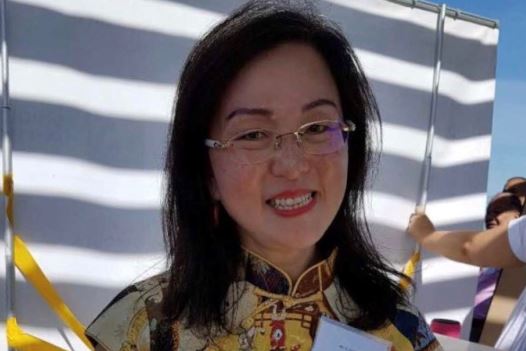 Australia has its first Chinese born MP. Yay! Scomo was nearly doing backflips in the Parliament, shoving her arm in the air and waving to her supporters in the public gallery.

He was delighted to see Australians now having a political leader from China in power over them. He seemed so happy; he must think that this is a great improvement for us. Celebrating difference is one of the most important things Australians are told that we must do.

There were definitely a few points where Ms Liu did seem rather different to the politicians we have been used to. Not that our current crop of Pollies have set a particularly high bar but right out of the starting gate, Gladys seems to have plumbed new depths.

At the security briefing for new MPs, Gladys dominated the questions. She apparently, asked ASIO if they could vet any and every person who requested an appointment with her. Wow! That’s a first for Australia. Want to meet your MP? You’ll need to be vetted by ASIO first. Let’s pop the champagne corks for that one.

Again, I’m not singing the praise of our Dear Leaders – but this is next level. We just don’t do that sort of thing in Australia. That sort of behaviour is reserved for totalitarian dictatorships like – oh, I don’t know – China perhaps?

At another briefing for new Pollies, she apparently asked how she should declare an object she had been given that she was unable to describe. When pressed, she kept responding that she couldn’t describe it. Not surprisingly, this raised a couple of eyebrows.

Some of her colleagues may have been concerned by her giving part of her maiden speech in Mandarin, excluding most of the rest of the Parliament from knowing what the hell she was talking about. They were polite enough not to say anything of course but I thought it was rather poor form.

However, more worrying are the claims by Charles Sturt University professor Clive Hamilton. He pointed out Chinese-language documents which revealed that Ms Liu and her Labor opponent, Jennifer Yang, were both involved in groups linked to the Chinese Communist Party.

There are also apparently some records showing that a fundraising function for Gladys’s campaign last year included guests from Chinese community groups in Melbourne which are officially endorsed by the Overseas Chinese Affairs Office.

In case you are not familiar with that particular office, it is an arm of the Chinese Communist Party’s United Front Work Department.

In other words, voters in the electorate of Chisholm in Victoria last year were faced with a choice of two Chinese women, both of whom are suspected of having ties to the Chinese Communist Party.

That is the same Communist Party that starved 38 million of their own citizens to death and is currently suspected of doing a roaring trade in human body parts.

Being a teacher in China during the ’70s would have you accused of crimes which were painted in red on a gigantic hat you were forced to wear. Some were literally beaten to death.

Scott Morrison seems to be over the moon about this situation. I wish I could share his enthusiasm. I mean, we have to give Gladys the benefit of the doubt, but I just keep getting this niggling “what if” thing rattling around in my brain.

Like “what if” the Chinese Government weren’t really our friends. “What if” they actually coveted our gigantic continent and were plotting to chuck Cloive Palmer under a Haul Truck and grab all these juicy commodities for free.

“What if” they could afford to bribe both the Liberal and especially the Labor parties to allow huge influx of Chinese migrants until huge swathes of Sydney and Melbourne were de-facto Chinese enclaves.

“What if” the only people the Chinese Government allowed to migrate to Australia were so ideologically committed to the Chinese Communist Government that they would get into violent confrontations with students from Hong Kong who expressed opposition to an illegal totalitarian power grab.

“What if” all of those Chinese were determined to vote tribally to get what they wanted – even helping to unseat sitting Prime Minister John Howard after he didn’t critisise One Nation strongly enough for saying that Australia was being “Swamped by Asians.”

“What if” diversity was just a code word for “less White people.” After all, Gladys described Australian diversity as “absolutely brilliant.”

Meanwhile, she was completely silent on the need for her native Hong Kong to have more White people to increase the diversity there. You might have thought she would have been a fan of that, since it had such a huge benefit on that lucky part of China.

While Mainlanders were starving, being incarcerated, disappeared or murdered for suspicion of being “bourgeois,” Hong Kong residents were enjoying economic freedom, the rule of law and a standard of living their self-governed cousins could scarcely imagine.

If “diversity” really does mean “less White people” then Hong Kong is actually becoming more diverse as last of the British people and their institutions are gradually squeezed out of the place.

Could that be what the Chinese Communist Party has in mind for Anglo Australia? Are Gladys and her supposed Labor opponent Jennifer Yang just cogs in some giant Machiavellian scheme to take this country over without firing a shot?

No, it can’t be. It sounds too much like something Sun Tzu would counsel. Fortunately, I’m pretty sure that the Chinese have never read The Art of War. “Know yourself, know your enemy. One hundred battles – one hundred victories.”

Thank God Scott Morrison is all over it.