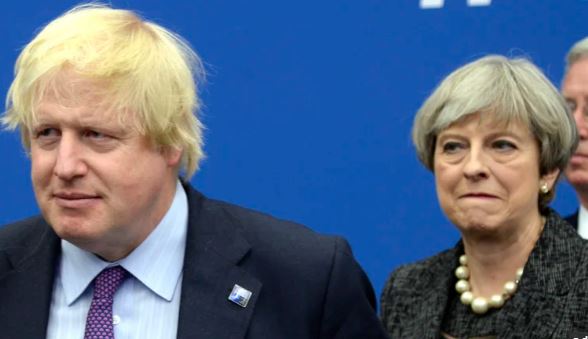 Once upon a time, the British were routinely described as “Lions led by Donkeys.” I’d hesitate to repeat such a slur in these times. It would only take one donkey with a half decent defamation barrister and the Post would be finished.

Seriously though, May, Cameron, Brown, Blair – the mind boggles. We went from actively hostile, to criminally incompetent and everything in between.

When Cameron resigned in ignominy, I had my fingers nervously crossed for Boris. He was never in the running at that stage of course, but times have changed.

Theresa May’s steady hands turned out to be clamped like limpets around the EU’s apron strings.

She was utterly determined to deliver Brexit without actually leaving and was prepared for the British taxpayers to pay any price to ensure this twisted outcome.

The charade couldn’t go on forever however, and she has thankfully been put out to grass (though I can think of a more fitting reward).

In this day however, the “steady as she goes” crowd have been shown up as so incredibly incompetent that the party is prepared to try anything.

The fact that Nigel Farage’s Brexit party are snapping at their heels is another important factor. Under May, there was a real chance that her incompetence and lies could have destroyed the entire party.

Nothing sharpens a politician’s instincts like the threat of having the trough pulled away.

How Boris will go is anyone’s guess of course, but he has made an encouraging start. The thing I like about Boris is that he is his own man.

Unlike the other stuffed suits, he is not afraid of making a bold statement of a bold move. He has sacked half the old cabinet and replaced remoaners with brexiteers and enemies with supporters.

Too many so called leaders on our side have been paralysed with fear and have consequently allowed themselves to be surrounded by enemies. This has seen them undermined at every turn.

The statements that Boris has made have also been encouraging. In particular, he has set an urgent course to prepare for a no-deal.

Whether you think a no deal is a good idea or not, this is the only sensible course to pursue. It is what Theresa May should have done immediately after the referendum.

In not doing so, she signalled to Brussels that she would have to have a deal – at any cost. This is negotiation 101. WTH was May thinking?Whether this was malice or stupidity is hard to say. Either explanation is entirely believable.

From the point of view of the EUSSR however, it was a godsend. May had strapped the UK over a barrel and lubed it up with extra KY for good measure.

Johnson on the other hand has charted a course to crash or crash through. This will terrify the Mandarins in Brussels. What is even better, is that Boris has put them on notice that no deal means no payment.

What I most like about Boris is that he has good instincts and he is not afraid to defend them.

At the height of the GFC – when everyone else was bagging Capitalism, Boris stood up and defended it in terms that everyone could understand. “I brewed some cider” he told anyone who would listen.

“If you took into account the cost of the ingredients and the time and effort I had to put in, it would have been the most expensive cider I have ever drunk – Capitalism works” he declared.

He has his faults but I think he will be immeasurably better than any British leader since the Iron Lady (who was far from perfect herself).

Other than Nigel Farage, I can’t think of any British mainstream politician I would sooner see handling Brexit.

At this stage, I think a no deal is looking quite likely. That is my own favourite option. It will cause some turmoil in the short term however; I suspect Trump will do everything in his power to backstop them (which is more than most of them deserve from him).

British companies which are shut out of Europe will quickly pivot away from Europe and towards America and hopefully Australia and New Zealand.

I have seen this happen before. I think Boris understands the formula for success and he will slash red tape and taxes which will kickstart the economy.

Europe will be the big losers in this. The UK is one of the few nations that were a net financial positive. The burden now falls mostly on Germany and what is left of the French economy.

The damage inflicted on the various nations will be slated home to the EU and a successful British economy will have other states clamouring to leave.

There is an old truism among DJs. When you have one person up on the dance floor, no one else wants to join them. However, once a second person gets up and starts dancing, everyone else follows.

Trump was the first leader of a major nation to break away from the status quo. Boris looks like being the second. He isn’t Trump, but he is pointing in the same direction. It looks like the trickle is turning into a flood.

These guys are not perfect (politicians never are) but they are a giant leap forward for mankind.

I feel quite inspired