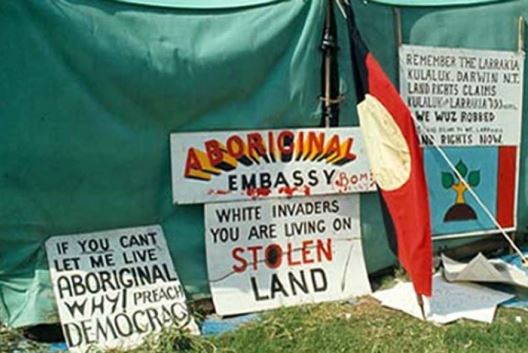 During the last few weeks The Australian newspaper has carried a number of front-page stories demanding a “Voice” for the Aboriginal people. Either Newscorp, or the people who finance them, want this “Voice” badly – or so it would seem.

They are demanding more power for Aboriginal people. This is to make up for – amongst other things – all that they lost when the English annexed/invaded Australia.

Well, obviously, the Aboriginal people did lose out when the English turned up. They lost their position of dominance on this continent and that is no small matter.

There were undoubtedly other things which they lost which have been well documented elsewhere.

However, if we are going to start tallying up grievances, then we need to have a quick peek at the other side of the ledger and ask, “What did the Romans ever do for us?”

What, if anything, did the Aborigines gain when the Poms appeared that may – in some small measure – have compensated slightly for their loss.

I’m just a simple bloke, but here is a short list (in no particular order) of a few things which I think Aboriginal people gained from the “invasion.” These advantages should give some solace to those whose ancestors were here since the Dreamtime.

Whilst some aborigines would have had a say in the affairs of their societies before Captain Cook arrived, many wouldn’t.

Women, for instance have precious little input into the affairs of other hunter/gatherer societies; and there is little evidence that Australian Aborigines were any different.

In such situations, the strongest take power. Where survival of the fittest is the name of the game, “Might is Right” and the weaker members of society shut up and take orders.

There was no record of Aborigines being allowed to vote during the 50,000 years pre-European settlement.

It wasn’t until 45 years later that White women in South Australia got the chance to cast their ballots. There are those who still think this might have been a mistake….

In 1829, all Aborigines born in Australia gained British sovereignty. Consequently, they became British subjects by birth.

This meant that they were covered by a very special treaty – one which was pretty much unknown outside of the English-speaking world at that time.

This incredible treaty has restrained the Rulers of British citizens since the Magna Carta – and boy, do our Rulers hate it.

The Constitution is the product of the accumulated genius, and failures of the British people over many centuries.

People fought, killed and died for it. Brilliant men argued, forged and fine-tuned it as a means to protect the weak and the downtrodden from the rich and powerful.

And what a difference it has made. All around the Anglosphere, the British people had access to legal and political channels to redress their grievances without resorting to violence.

Was life perfect for people living under the protection of the Constitution? Of course, it wasn’t. But it was immeasurably better than for those who lived just about anywhere else on the globe at that time.

Our ruling classes would do anything to trash this treaty. They have been scheming to do just that since the evil King John was forced to sign its predecessor at Runnymede.

If you think that this attempt to re-write Australia’s Constitution is intended to benefit the Aborigines – rather than our ruling classes- then I have a fabulous bridge I’d like to sell you….

Being a hunter/gatherer is not all it’s cracked up to be, particularly if you are one of the only peoples on earth who have yet to invent a bow and arrow.

Let’s be honest, outside of the coastal strips Australia is a pretty hostile place. Droughts and floods were plenty common before the industrial revolution.

These are bad enough today, but before Coles and Woolies arrived on the First Fleet, these natural disasters would have created unimaginable misery. Consider how desperate you would have to be to eat a witchetty grub?

Then imagine how hard it would be to dig a few of these up in a sun-baked paddock – with a stick. Are you starting to get an idea of the desperation of a truly starving person?

Since Whitefellas showed up with agriculture, technology, trade, Centrelink and McDonalds, there has been little reason for Aboriginal people to starve.

Whatever else we may have done wrong; we have provided the means for them to get three square meals a day with little to no effort.

It may not be fashionable to say this but living in a place without the law is not pleasant (unless you are a powerful and violent sadist).

I find it hard to imagine that Australian tribal law was different from any other kind of tribal law. That is to say that it would have been sporadic and arbitrary at best.

In primitive societies the law depends largely on the power of your group or tribe to enforce it. One of the best books on the subject is War Before Civilisation by noted anthropologist, Lawrence Keeley.

Lawrence uses irrefutable methodologies. One example of this, is archaeological evidence which shows the percentage of violent death among pre-modern peoples. He paints a picture of endemic brutality and violence in tribal and pre civilised groups.

Some aborigines today do live in remote settlements which have high levels of violence and lawlessness compared to other parts of Australia.

However, most Aboriginal people live in urban areas (Western Sydney has the highest percentage of Aborigines in the country) which have a well-established system of law enforcement.

Admittedly, Western style law enforcement has not always been to the liking of Aboriginal people – but I haven’t heard too many of them pleading for a spear in the leg as an alternative.

Whilst there has been much handwringing about Aboriginal people living in remote areas without access to world’s best medical facilities, some 80% of the indigenous population live in urban areas.

They have the same access as the rest of us to the best medical treatment money can buy – for free. Any Australian who lives in the outback, whatever their race, will lack access to large, ultra-modern hospitals.

This is not an insignificant benefit. Getting a toothache without access to a dentist can be bad enough. In primitive societies, a bung appendix or an infected cut can be a death sentence.

Had the Poms not turned up, someone else would have. La Perouse arrived only a year or so later. The Aboriginals could not have defended themselves against any of the more technologically advanced people of the World (which is pretty much all of them).

If not for the presence of the English, they would almost certainly have been invaded by the French, the Dutch, the Spanish or (God forbid) the Belgians.

If the Europeans had not arrived, it would have been the Japanese (ask the Chinese or Koreans about that) or the Chinese (ask the Tibetans or the Uighurs how that has worked out). As far as invasions go, being invaded by the Poms was like winning the lottery.

OK, So They Still Lost

I could go on and on about what the Aboriginals gained but yes, they still lost hegemony over the continent. I don’t mean to say either, that they lived a life of misery before we got here and invented ipads.

I wasn’t born in those days of course, but I expect they had good times as well as bad. They lived, loved, laughed, had families, hunted, and hung out.

To pretend however, that this was some kind of idyllic Garden of Eden is just a Marxist inspired fantasy

They lost something tangible when we came but what they gained was incredible and had we not arrived; they would most likely have fared far worse.

Of course, some Aborigines probably suffered badly from things that some English people did, but those things happened long before any of us were born.

Also, pretty much from day dot, the Aborigines had the protection of the English Common Law. Mistreating Aboriginals was against the law and people could be (and were) punished severely for it.

It is also true that Aboriginal people on average (though not all of them by a long way) lag behind the rest of the population in a number of important metrics.

None of these are caused by discriminatory legislation. If it were, then having more Aboriginal representation might help. In fact, there is not one law in force today which disadvantages indigenous people and there are many laws which benefit them.

Aboriginal people have just the same representation that the rest of us do. Their votes carry the same weight as yours or mine. And that is how it should be.

This proposal for a “Voice” is nothing more than a cynical power grab.

All it will do transfer wealth and power based on a grotesquely racist proposition which is intensely fashionable in our universities. That Aboriginals are suffering through oppression; is accepted in academia without question.

Because they can find no evidence for this proposition, academics are forced to do logical backflips and invent something called “Institutional Racism.”

This ridiculous idea takes an effect (poor outcomes) and attributes a cause (racism) without a shred of connecting evidence. It turns the scientific and logical process into a laughingstock.

The Uluru “Statement from the Heart” is filled with emotive rhetoric designed to make us feel guilty so that we will hand over yet more money and power.

In order to do this, they want us to abandon the fight against racism. Having achieved equality in every sphere, we now see that equality was never the goal.

These “anti-racist” crusaders never wanted to abolish racism. They love racism and actually want a deeply racist society. They just want to make sure that they are the ones who benefit from it.

If they ever get that power, this racism, division and inevitable conflict will destroy the amazing society we have created.

We must not allow the trashing of our laws or Constitution. It is time to clip the wings of the racist Aboriginal grievance industry. If we are going to change our constitution, we should change it back to how it was before. We should end the power of the Government to help indigenous people based on their race.

If the Government wants to help people, it should do so based on their needs – not based on a DNA test.