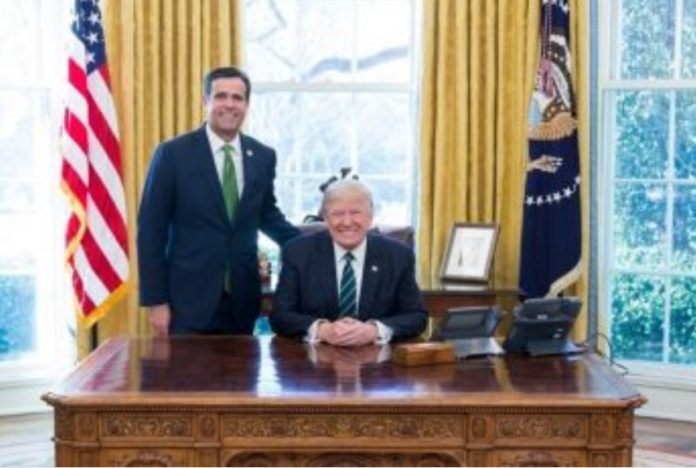 [Please note: The John Ratcliffe nomination has been withdrawn as of yesterday due to pressure from the press and Democrats as is noted here. However, the article is highly relevant, possibly more so, in light of those changes. A big thank you to Tigerbalm for pointing this out and refraining from gloating over my ignorance of this development]

President Trump has finally given the Director of National Intelligence, Dan Coats, the boot. The Trump-hating collusion kook (Turn)Coats was a Reince Priebus hire a couple of years ago, so this comes not a moment too soon.

Trump’s nominee to replace (Turn)Coats is Congressman John Ratcliffe (R-TX). Ratcliffe is an America First patriot, so that has the usual gaggle of elites upset.

From The Guardian, “US President Donald Trump’s nomination of an inexperienced but loyal partisan to become the director of national intelligence (DNI) is an attempt to ‘neutralise’ US spy agencies as an independent and objective voice on global affairs, former intelligence officials warned.”

That pretty much sums up the entire difference between normal Americans and Democrat elites right there. The heads of US intelligence agencies are supposed to be an “independent and objective voice on global affairs,” but being a “loyal partisan” is bad.

It’s funny how those same standards are never applied to partisan Democrats who are nominated to intelligence positions by Democrats in the Oval Office. Leon Panetta, for example, served as Bill Clinton’s White House Chief of Staff in the 1990s. Panetta’s office was most famous for hiring a young intern by the name of Monica Lewinsky.

Panetta’s only lifelong experience related to “intelligence” was a stint in the US Army from 1964 to 1966, when he managed to avoid going to Vietnam. That lack of experience didn’t stop Barack Obama from nominating Panetta to run the CIA in 2009.

Here are three facts about Trump’s nominee John Ratcliffe: He’s one of the most conservative Members of Congress; Ratcliffe is no Louis Gohmert, but he’s as conservative as Ted Cruz on most issues. Ratcliffe has a very America First sensibility, as evidenced by the recent Mueller hearing. And Ratcliffe won’t be telling Attorney General Bill Barr, “Oh, sure, the Russiagate documents are in the mail. You’ll be getting them any year now!”

Here are some educated guesses and predictions as to what John Ratcliffe will not be doing if the Senate approves him as President Trump’s next Director of National Intelligence:

John Ratcliffe will not walk into the National Archives, take classified documents related to the 9/11 attacks, stuff the documents DOWN HIS FREAKIN’ PANTS, walk out of the building with the documents, and destroy them. [Harry’s note: this was actually done by Sandy Berger, see HERE]

John Ratcliffe will not sell firearms to Mexican drug cartels in hopes that those weapons will be used to kill Americans.

John Ratcliffe will not send shiploads of weapons to the Muslim Brotherhood in Libya, use those weapons to arm terrorist groups throughout Africa, and urge those Muslim terrorist groups such as Boko Haram to topple democratic governments and impose Sharia law on majority Christian nations.

Likewise, John Ratcliffe will not urge foreign governments to donate to the Clinton Foundation to rebuild infrastructure in those destabilized African nations.

John Ratcliffe will not authorize US military helicopters to drop crates of cool, refreshing bottled water in the desert for ISIS fighters in the middle of a battle with the Kurds in northern Iraq.

John Ratcliffe won’t be doing any of those things. Those actions were all taken by “intelligence” geniuses who were appointed by Barack Obama and Bill Clinton. John Ratcliffe’s biggest flaw, according to the Democrat elites, is that he’ll be loyal to the United States of America and to his boss, the elected President of the United States.