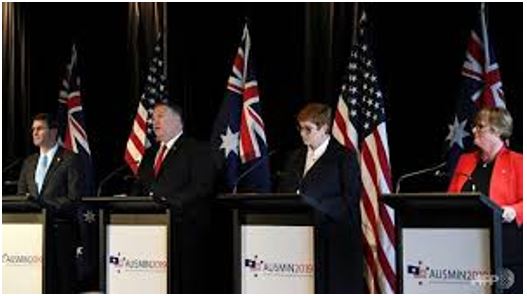 This was Esper’s first big outing, the purpose of which was to declare the alliance between the U.S. and Australia as strong as ever.  But is it, really? And where was New Zealand?

If the Red Dragon swept down with all its force, would the U.S. put boots on the ground and jets in the air over the Land Down Under?

I think it would—at least under Trump—but would Australians want that?  I don’t know the answer to that, but the Alliance is indeed being tested.

How much ‘pain’ can the alliance stand and for what ‘gain’? I am honestly seeking answers on behalf of Australians, as I love the home of The Richardson Post—perhaps the last bastion of free speech on earth—and the free world can’t afford for you to go silent.

The U.S. and Australia are linked by a 1951 alliance known as ANZUS, (the Australia, New Zealand, United States Security Treaty of 1951), where our nations pledged mutual defence. Unfortunately, the ‘NZ’ was missing from this important renewed ‘pledge of alliance’. Why?

Was the feckless Jacinda Ardern too busy playing with her Facebook page to attend? This is truly disconcerting that she intentionally showed a potential crack in the alliance when solidarity is most needed.

China plays the long game and its charm offensive (using cash and loans with natural resources as collateral) has been highly successful, especially for China.  They wield strong influence all over the globe and most nations are beholden to them—including my own.

That’s right.  The United States of America is China’s largest client state by far. In fact, if China had refused to renew $1.11 Trillion in loans to the U.S. under Barack Obama, my home nation would have defaulted on its payments not only to China, but the world.

This would have caused market shocks which would have been both severe and long term.  That $1.11 trillion in debt to China (as of May 2019) is 27% of the $4.1 trillion of U.S. debt held by all foreign countries, so it is significant.

Don’t forget that China is extremely important to Australia. While China ranks only ninth as an investor in Australia, (with a 3% share of total foreign direct investment according to the Australian Parliament), China is Australia’s largest trading partner in terms of both imports and exports.

Twenty-five per cent of Australia’s manufactured imports come from China; 13% of its exports are thermal coal to China.

That is a major relationship to ignore or put at risk, so expecting a 70 year-old promise made in a completely different time to be honoured is a question worthy of asking.

Let’s say the China-U.S. trade war escalates, which is possible, given the ego on one side and the willingness to test new found military powers on the other, and Australia is chosen as the ground for a proxy conflict.

For starters, under Trump, China can kiss their $1.11 Trillion in ‘loans’ goodbye.  If war is threatened against the U.S. or its allies, Trump will either dismiss that debt as retroactive tariffs and fines for three decades of stealing U.S. intellectual property and cheating on trade deals, OR, he will simply have $1.11 Trillion in federal reserve notes printed, and put them on a slow-boat to China—flying a big, white flag ‘DEBT PAID’.

What few people know is that the only thing of less value than one ‘federal reserve note’ is 1.11 trillion of them.

China bought all that U.S. debt with the understanding that it would be repaid in this unbacked ‘federal reserve note’—which is neither ‘federal’ nor does the privately-owned Federal Reserve central bank have a ‘reserve’—so Beijing can’t say they were cheated.

As Blutto said in “The Animal House” movie to Flounder after they destroyed his brother’s car, “Hey, you fucked up. You trusted us.”

Such a printing and dumping of this unbacked currency at one time would leave a hole in both China’s balance sheet and its ability to fight an extended war (or buy and build war toys).

Peddling its enormous influence would stop—if it hasn’t already due to Trump’s tariffs—as that profligate splurging was mostly paid for by abusing trade with the United States which Trump is shutting down as well.

Further, those physical dollars could only be spent by China in the enemy’s territory—the U.S.—with mostly U.S. companies, worsening China’s dilemma.

What’s more, if Trump accused China of ‘currency manipulation’ (as he just did this week) those bills could be outlawed for trade altogether.

Are you getting the picture of why the New World Order hates this guy so much? He does not play by their rules and never will.

If I was a One World billionaire prick seeking to rule the planet, I’d hate him too.But real world economists know that printing too much new money is like pouring water in the coffee.

At some point, it gets so weak you can’t call it coffee anymore.

Like the coffee analogy, printing such a massive amount of currency at one time would devalue every ‘federal reserve note’ in circulation by an equivalent percent to the printing (roughly 25% in this example).

That would be so extreme that the U.S. manufacturing sector could become competitive with China’s overnight So I hope he does it,

There are two points to note here:

1) Fake money has its limits, and

2) If you are stupid enough to depend on fake money, you will eventually lose.