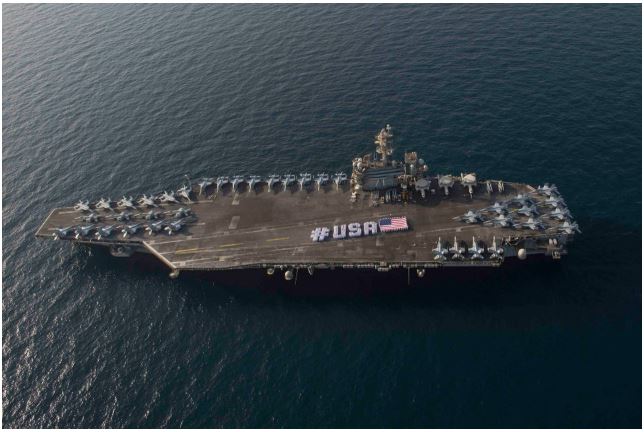 Continued from Part one.

HOW ARE WE LOOKING MILITARILY?

Good question and that’s a different situation. It’s also far less certain in 2019 than it was in 2016.

The Russia-China relationship strengthened over the past two years thanks to the Democrat’s ‘destroy Trump at all cost Russia Hoax.

That fraud prevented Trump from pursuing his intended strategy of seeking a better relationship with Putin. That approach would have discouraged Putin from getting closer to Beijing.

Through a falsely contrived narrative, co-ordinated at the highest levels of the U.S. government (a recently disclosed e-mail from the FBI stated, “the [Obama] White House is running this”), Donald Trump’s brilliant ‘divide and conquer’ plan was squashed through fraud.

Why? Because Obama’s handlers had no interest in promoting a peaceful world. It is bad for the Party of Davos crowd that makes money off the back of conflict and war.

So now the situation is far more dangerous.  Thanks, Democrats. May you rot in Hell.

The Democrat Hoax may inflict a heavy price on Australia as well. Russia and China are suddenly flying joint missions and sharing intel.

They would have been enemies if their power-hungry allies in the U.S. Congress hadn’t suborned the Hoax—which they continue to this day, even after four investigations exonerating Donald Trump!

So, here’s the match-up. The U.S. has 20 sophisticated Aircraft carriers in service, with 2 under construction, 2 more ordered, and 15 planned vs. China’s one refitted Soviet party boat. Unfortunately, complacency is still not in order. Why, you ask?

“The U.S. has 18 Ohio-class submarines, of which 14 are Trident II SSBNs (Ship, Submersible, Ballistic, Nuclear), each capable of carrying 24 SLBMs,” according to public U.S. records.

Keep in mind however, that these are deployed, all around the world. China is focused on its own backyard, and they are quite notably set to dwarf the U.S. submarine fleet.

They have more flexible units designed and built for the South China Sea and its shallower waters.  This is a major problem for the Alliance—especially with Jacinda at the mosque instead of on board with her nation’s allies.

They also have 13 Song-class/Type 039 SS units and 17 Yuan-class/Type 039A diesel-electric air-independent power attack submarines.” Three more are currently under construction.

“By the mid-2020s, China will likely build the Type 093B guided-missile nuclear attack submarine,” the Pentagon report notes.

Lots of them, in fact. So, we’re screwed by 2025 if the dynamic doesn’t change, but for the sake of our friends, any conflict must be kept in the air and in the water, not land.

Why? Well, I remember standing at an intersection in Shanghai the day after the Tiananmen Square Massacre 30 years ago, (as written about in a previous article).

That day, I saw at least a million Chinese standing quietly in the streets in each of the four directions.

It was so quiet you could hear a pin drop. I thought to myself that if these people ever rose up or were sent to battle, no one could defeat their numbers. No one.

So, for all our sakes, Chi-com troops can never be allowed to reach the shores of Australia.  Never.

That’s where the U.S. and Australian Navies (and maybe our Kiwi friends) should focus if the kimchee hits the fan. Sink every boat coming south and never let a single one land.

Let’s hope the alliance stands and Jacinda gets her burka handed to her next year in the election so NZ comes back into the fold.

We need the amazingly courageous Kiwis in this fight, as usual, (like the last two world wars and the Cold one), just not their hapless PM (Prime Mullah) Ardern.

Pitch the Bitch and we ‘go to the mattresses’ in unison as always if the shitstorm comes. I’ll come die with you to save our Western Heritage. That’s a promise I hope I don’t have to keep – but will.

The Chi-coms want to dance? We’ll show them some steps they’ve never seen.