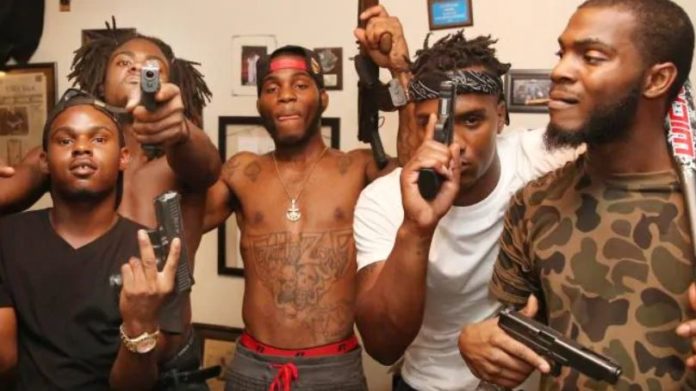 This may seem counterintuitive, but think about it.  Let’s say for the moment you are a criminal – so think like one.

Question — “Are you going to be bolder in a ‘gun-free zone’ where your victims are all unarmed, or in a ‘concealed carry’ state where every other person has a big bulge under their jacket?”

You did not misread that, my friends and this is good news, because you are safer. Australia’s guns per citizen rate actually rose from .94 to 1.95 after the buyback.

So if guns were the problem, your homicide rate would have risen as well—but it did not. In fact, as gun ownership doubled in Australia, the rate of homicide reduced by almost half (7.0 per 100,000, to just 3.6).

While your Leftist politicians will lie to you and claim that it was their buyback scheme that did this, the facts prove the exact opposite.

More guns in the hands of CITIZENS (mark that word ‘CITIZENS’) will reduce crime in any non-Muslim nation. That is a fact.

And that is a good thing Australia. Your politicians should be happy about it as should mine – but they’re not.  More guns in the hands of CITIZENS has made both our countries safer.

Unfortunately, I doubt you will hear this elsewhere, as the co-ordinated collectivist schemes around the globe all require an unarmed populace to succeed.

That’s why Australian Leftist leaders push the disarmament narrative, just as they do in my home nation of America.

When faced with the proven facts, liberals and other socialists have no actual reason to disarm the people other than the obvious historical one.

If they really wanted to make you safer, they would institute gun-training programs and encourage lawful ownership of weapons, such as safe public carry laws—but they don’t, do they?

So, if your safety isn’t really their concern, why are they so desperate to disarm us? Why do they want to leave us subject to protection only by forces which they alone control?

The question answers itself. It is to leave you defenceless against government force. No honest leader would seek this.

RULE—ANY ‘LEADER’ WHO WANTS TO TAKE YOUR MEANS OF SELF DEFENCE HAS THEIR OWN BEST INTEREST AT HEART—NOT YOURS!

Government gun confiscation schemes have nothing to do with your safety.  It’s all about their own—when they decide to take over.

You have to be defenceless for it to work, so that’s the number one target in any Socialista’s playbook—take away the public’s means of self-defence—just as they are all screaming in my nation today after two horrific weekend shooting sprees.

But what the Leftist remain silent about is the everyday shooting sprees in Chicago. This Democrat-run city is “Gun-free”, yet it had 32 separate shooting incidents just this past weekend.

52 people were wounded and seven were killed, but you didn’t hear about that, did you? Of course not, because it shows the real problem.

There is a lack of weapons in the hands of CITIZENS who could have prevented most of this violence.

Only criminals and illegal aliens are armed in Democrat-run Chicago, so their ‘gun-free’ zones are where they see the greatest gun violence.

FACT — “Murder in the U.S. is very concentrated.”

If just 10 Democrat-run ‘gun-free’ cities are removed from the data, the United States immediately becomes one of the least violent nations on earth

There were 2.5 million defensive uses of weapons in America just last year according to statistics published by the New York State Rifle and Pistol association.

That’s 2.5 million murders, rapes and robberies avoided, because the citizen was armed.  In most of those cases, simply showing the weapon stopped the crime before it could occur.

Politicians without a hidden agenda, who really sought safety for their citizens, would embrace such facts. They would find ways to encourage responsible firearm ownership.

Instead, they try to give themselves a monopoly on force to the  severe detriment of the people, actually putting them in more danger.

Data from the Crime Prevention Center reveals that more than half of all homicides in America occur in just 2% of the roughly 3,100 counties.

When one realizes that fact, it becomes clear that the Democrat’s anti-gun policies are contributing to the problem rather than offering the answer.

It becomes especially clear when you compare them to Republican-run cities, many of which encourage armed citizens and concealed carry laws.

These cities have very little crime. One must ask why our nations’ politicians embrace doubling down on the failed policies of the Democrat-run crime zones rather than policies that stop crime.

There is only one answer to that question.  Public safety has nothing to do with it.

In fact, I lived in that dark red spot in Southern Florida back in the 1980s when violence spiked (after the Mariel boatlift from Cuba deluged Miami with 250,000 foreign immigrants).

The Northern half of the county became a ‘concealed carry’ zone, where any CITIZEN who qualified could carry a firearm hidden from view.

The Southern half of the county became a ‘gun-free zone.’  I don’t need to explain to Post readers what happened next, but in case a Lefty is reading this, I will tell you. Literally overnight, crime stopped in northern Dade County.

Guess what happened in the ‘gun-free’ southern half?  It turned dark red, like on the map above.

WHAT IF POLITICIANS ACTUALLY WANTED THE PUBLIC TO BE SAFER?

They could easily look at the safest societies and imitate them.  As example one of the Western nations with a near zero rate of homicide also has one of the highest in gun ownership.

They are also definitely number one in gun training.  Due to mandatory military service for men between the ages of 18 and 34 (and voluntary service for women) the Swiss are highly trained in safe arms handling.

They keep their weapons and gear at their homes.  There is little wonder that crime is almost non-existent among the Swiss.

Their model of having an armed citizenry has also kept them safe from harm for the better part of a millennium. Not even Napoleon or Hitler was brave (or stupid) enough to go door-to-door with the Swiss.

They gave Switzerland a wide berth. No army of conscripts can beat an armed militia or people defending their homes and families. None.

This perfect model of government force also creates an amazing level of trust and a bond between government and its people.

Tyrants and Leftists don’t have a chance where the people have control of force–which is why this form is so rare.  It shouldn’t be, and it is never too late to adopt it to prevent Leftist thugs and tyrants from ever taking over again.

My nation copied the Swiss system in its Constitution and though still the rule of law, it has been disassembled by warmongering Leftists and Rightists seeking ever more power. America’s is now the largest standing army ever.

Perhaps one day, all of our leaders will realise that having an armed and trained citizen army is the best way not only for us to live together more peacefully within our own nations, but to make our world safer and end (most) wars between our nations as well.

But for now, we need to push for more responsible gun-ownership by CITIZENS, not less.  More guns = less crime, and that’s a powerful, proven fact.