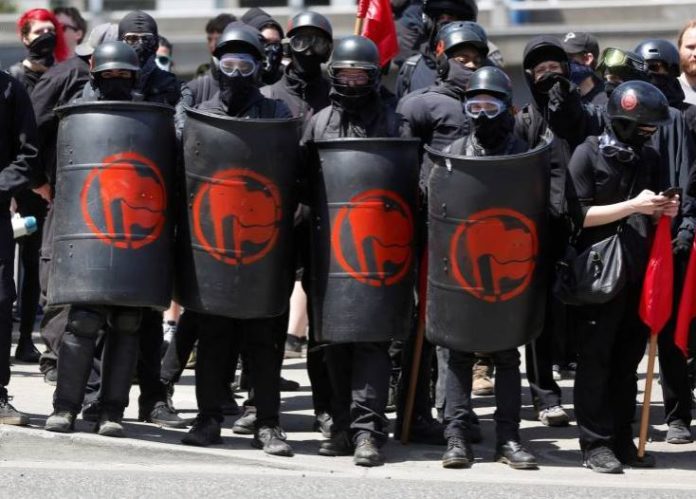 These scumbags clubbed a Bernie Sanders supporter and left him concussed and bleeding for carrying an American flag. Brave.

Let’s start with some history.

Both had hard-core Marxist ideologies, but the re-writers of history today falsely place them at the other end of the ideological spectrum. Why would they do that?

The thugs of the left must deprive you of truth by re-crafting history to match their latest narratives.

The Democrats, for example, founded slavery depriving blacks of their rights for 200 years, founded the KKK and now try to claim Republicans are racists—though it was the Republicans who ended slavery and Jim Crow laws and were lynched by the Dem’s KKK along with blacks.

Now they are re-creating history again because their fellow Marxists, Hitler and Mussolini, were not very nice men and they’re trying to purvey the same old bullshit in a shiny new wrapper.

As practitioners of the same ideologies being again pushed today, these men and their ilk murdered millions, propagated eugenics, and probably had bad table manners—you know, typical Lefties.

So, the only way to fudge history now that Marxism is again on the rise is to re-paint them as somehow being ‘conservative’ right-wingers.

Don’t believe me?  Look how Google and Wikipedia have falsified this word. When I type in ‘fascism’—a decidedly left-wing Marxist ideology—this is what pops up first in line:

“Fascism (/ˈfæʃɪzəm/) is a form of radical right-wing, authoritarian ultranationalism[1][2] characterized by dictatorial power, forcible suppression of opposition, and strong regimentation of society and of the economy[3] which came to prominence in early 20th-century Europe.[4] “

If Hitler and Mussolini are “Right Wing”, then perhaps Marx is now a ‘conservative’?  Hmmm.

This is the constant mantra, every day, in every way on CNN and MSNBC. According to Grabien Media, in fact, “CNN, MSNBC said ‘racist’ more than 4,100 times from July 14-21—just one week—and they weren’t talking about real racists.

They were talking about President Donald Trump—whose life and record as President refute the very idea.

Their ‘evidence’ was so thin they had to make it up.  Trump’s public life includes 15 seasons and 192 episodes of his hit show, The Apprentice, where he used his trademark hand sign, which means “OK” with no allegations of racism.

To my knowledge Trump himself was never called, or thought to be, a racist—until it became a convenient slur for the Wokies on the Left to do him harm as their enemy.

Huh? And when did that happen, Antifa/CNN/MSNBC/Democrats? Only when Donald Trump was the one using it.

When the truth doesn’t support the outcome you seek, if you’re a Lefty, you change ‘your truth’ to match the new narrative.

In fact, the leading Democrat running for President, Joe Biden, actually stated this awkward ‘truth’ last week in a speech.

He said, “we [Democrats] choose truth over facts.”  Was it a slip up?  Maybe, but he didn’t correct it, so probably not—and recent history proves them to be liars—‘bigly’ ones.

As for President Trump’s ‘racism’, I lived in New York City when he was roundly vilified by his fellow hoteliers for becoming the first to adopt ‘colour-blind’ hiring practices.

He was actually honoured for that by receiving the Ellis Island Award, along with Muhammed Ali and Ms. Rosa Parks, two black activists of Civil Rights fame.

He’s the least racist president in U.S. history, (including the Obamas, if hating whites is still considered racist).

SO, LET’S CHECK OUT WHO FUNDS THESE FASCIST LIARS AND HOW WE KNOW IT

George Soros is behind Antifa and other Fascist movements because his Open Society Foundation admits it.

Black Lives Matter was created by a false narrative of a police shooting—debunked by Obama’s own Justice Department—whose focus is sowing racial division in America and violently preaching hate against police.

Soros has given $248 million to divisive Left-wing womens’ hate groups to protest against Donald Trump.

In all, Soros pledged $18 billion to fund any hate groups targeting Trump or flooding borders with illegal aliens to disrupt Europe and America.

For this, Soros’ home nation of Hungary banned him as well as his Open Society Foundations for funding terrorism—specifically naming Antifa and his organisations funding the illegal invasion of Europe in their new “Stop Soros Act.”

That forced his Open Society gang to move where Soros’ Nazi Socialist training as a youth will be more appreciated—Berlin—the Fuhrer’s home.

But even more recently, we know that Soros is funding terrorism against America because Antifa is protesting Soros for not sending them payment for for their most recent violent disruptions! This is 13 seconds worth watching.

And this one from RT

These mostly over-privileged white boys and girls living in their mothers’ basements are being paid to dress up in black and destroy property while attacking peaceful conservatives.

That should be enough to place them and their funder, Soros, in jail and that may just happen. How, you ask?

Well it was reported in their recent attacks on peaceful persons in Oregon.

“Antifa terrorists’ groups planned to use dynamite in Portland, police said. The extremists hurled bottles and bricks at Portland police today at their counter protest against free speech. Police confiscated DYNAMITE, brass knuckles, knives and sticks from the Antifa protesters.” [Emphasis in original]

As a result of this latest unprovoked violence, Senators Bill Cassidy and Ted Cruz introduced a bill designating Antifa a terrorist organization.

President Trump wrote on twitter this weekend, ‘Major consideration is being given to naming ANTIFA an “ORGANIZATION OF TERROR.’

That’s why Geörgy Schwartz (a.k.a. George Soros) has temporarily closed his wallet to the thugs in black – and the blacks with thugs he’s been paying to sow chaos in America.

If the President designates Soros’s fascist street fighters as the terrorists they are, Geörgy becomes a funder of terrorism and can face his own troubles. This move is long overdue.