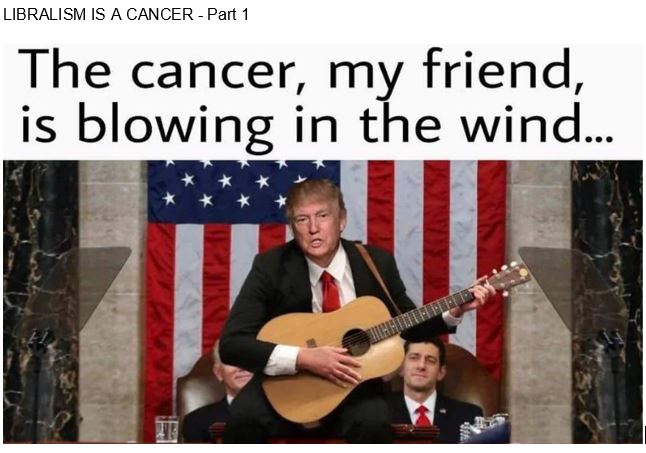 “Liberalism is a cancer, it is a forest fire, it destroys everything it touches.”

A TALE OF FOUR CITIES

Question—What do America’s most rat-infested, crime-ridden cities  with human faeces and homeless people covering their sidewalks have in common?

Answer—All of them are run by ‘Progressive’ liberal Democrats and have been for decades.

I left out New York City because after five straight terms of Republican mayors cleaning up, reducing crime and getting the city’s financial house in order, the new Liberal Mayor, Bill DeBlasio, hasn’t had time to destroy it yet—but it won’t take him long.

The cancer of liberalism is already having its effect on the Big Apple.

In fact, this morning’s news was about the exodus of wealthy New Yorkers leaving that city in droves, (taking the tax base with them) as the openly Communist ‘progressive’ Mayor DeBlasio seeks a 70% tax rate on top of the already high city and state taxes.

SO, LET’S START WITH CHICAGO, SINCE NYC IS OFF LIMITS

This once-great icon of the American Dream known as “The Windy City” was where East and West met—a fantastically successful and profitable place.

Under solidly liberal Democrat control since 1931—yes, 13 Democrat ‘progressive’ mayors in a row—this city has been destroyed and it holds the record as America’s homicide capital.

August 2016 was the last year of President Obama’s reign of reckless liberal policies. It also marked the most violent month Chicago had recorded in over two decades with 92 murders.”

It got worse when his White House Chief of Staff, Rahm Emmanuel, left Washington and took over the city.

“Fifty-six people were shot in Chicago over the weekend, including four fatally,” according to the Chicago Sun Times recent article.

“This is the second time in the last month that at least 50 people in Chicago were injuredby gun violence in the same weekend.”

Chicago has the most restrictive gun laws in the U.S. yet this unbridled violence took place in those ‘gun-free’ zones—and the city is losing population almost as fast as New York and Los Angeles—in my view, because of it.

According to Chicago Politics and City Life, “The latest numbers on Chicagoland’s population are out from the Census Bureau, and as has often been the case in recent years, they’re not good.

Democrat-run since 1931—now a disaster.  Liberalism is indeed a cancer.

But none of these cities are in the crapper like Nancy Pelosi’s district of San Francisco.

And I do mean in the crapper—literally. The Speaker of the House of Representatives presides over the largest outdoor toilet in the world.

That is not a joke. She’s turned “The Golden City” into “Baghdad by the Bay,” with faeces-covered sidewalks and tramps living rough everywhere.

25,000+ homeless American citizens live on the streets in tents and cardboard boxes in her district—yes, Americans—while Nancy and her Dem-Lib Comrades press for open borders and cradle-to-grave care for illegal aliens from behind their gated communities just a stone’s throw away.

When Libtards resort to sucking in illegals with giveaways unavailable to their own constituents, that should be a red flag.

A normal person might ask why Democrats are luring in criminals, drug-dealers and disease-ridden masses while refusing to take care of their own citizens?

Because they can’t win an election any other way.

Take a look at that map.  Would you want to live in Nancy’s district?  I didn’t think so.

BUT ISN’T NANCY FROM THE RUINED CITY OF BALTIMORE?

In fact, it was her daddy and brother (both mayors) who ran that amazing place into the ground with ‘progressive’ policies designed to create a permanent underclass who could be bribed with handouts in exchange for their votes.

The D’Alessandro gang took over Baltimore in the 1940s and the city has suffered through 11 ‘progressive’ Democrats in a row, without a single break since 1964.

Baltimore had one of the highest per capita incomes in the nation when it fell to the D’Alessandros. After decades of their rule the city now tragically ranks last in everything with a 22.4% poverty rate, while spending more per capita than any other city.

They are last in everything—except rat-infestation that is, and it is a serious, serious problem.

But what happened to that $1.8 billion Obama gave you to fix the rat problem and the schools in Baltimore?

Interestingly enough, as happens in Lib-run cities, the billions didn’t get where they were supposed to go.

The city still has a dangerous rat (and liberal) infestation, and I can assure you the money did not go to the schools.

In fact, a Baltimore official recently admitted that the Democrats consider education a ‘jobs program’ that has nothing to do with improving lives for their citizens.

It’s just a tool to keep the unions and Democrat officials happy and very well paid.

In fact, while the average salary for the city’s teachers “is the lowest among large cities,” Democrat administrators’ pay is “among the highest” according to the same report.

How bad is it? It’s simply unbelievable.

Out of thirteen public schools in Baltimore, “100 percent of students failed [math], according to a Baltimore City Wire analysis of the latest Maryland schools report card.”

That’s 100%—as in every single student. Not one kid out of 13 district schools passed.

This is not by accident. Democrat Plantations are designed to keep a permanent underclass on handouts.

They intentionally do this by keeping them uneducated and trapped on subsistence without basic skills to climb up the ladder, much less out of the gutter.

It’snot by colour, or creed. It’s by design, and I can prove it

Under Republican mayors in New York, charter schools and school choice were developed where parents could pick any school and it received the funding for their child’s education.

This amazingly simple idea paid off in spades as schools now compete for the funds.  Bad schools lost students (and money) to better schools, forcing them all to get better.

Let’s compare one of these New York schools with the same demographics as a Baltimore school.

Success Academy Bronx 2, had “Rocketing Scores” according to The New York Post, “using only books from the shelf.”  ALL 53 students passed their state’s math exam.

So, what do you think the new Democrat/Commie Mayor, Bill DeBlasio is doing with this exciting information from a district in his own city?  He’s doing away with Charter Schools and choice—back to the plantation.

As I say, New York City could be just an article away from failing as it did under liberal Democrat mayors back in the 1970s and 80s.

Keeping these kids on the Democrat Plantation is by choice.

Liberalism is a cancer—a dangerous one—bringing all down to the lowest common denominator, and it is being done intentionally leaving no doubt that Liberal leaders are bad people.

They know what they are doing. They are creating and keeping a permanent underclass by intent, as this school comparison proves beyond doubt.