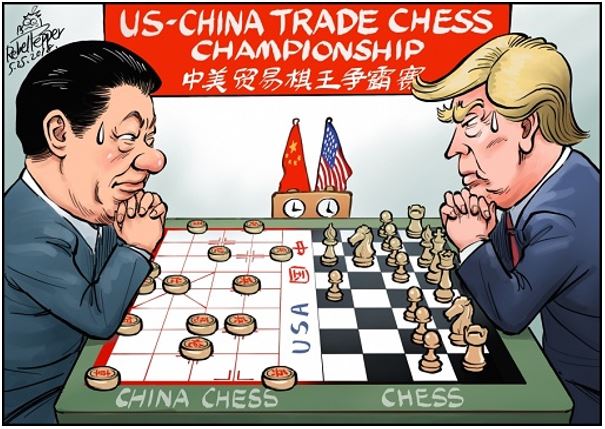 The Long Overdue Trade War is On

It’s been like the belief that the world was flat.  No one was even willing to challenge the mantra.  “China is in its ascendency,” the Davos gang and One Worlders told us. “The West is in decline—nothing we can do about it.”

In fact, Trump reacted to China as President Ronald Reagan did to that same ‘accepted wisdom’ regarding The Soviet Union—which he was told, “was in its ascendancy and could not be challenged.” “Nonsense,” he said.

“Tell me about their economy.” Reagan trusted his own instincts about how to handle what was then America’s greatest threat better than the ‘experts’.

“Russia’s economy is about the size of California’s, Sir,” was the response given—which was 50% off.  Their entire GDP was actually half of just one State—the same one President Reagan ran as governor— so he called their bluff—and brought the U.S.S.R. to its knees. They had spent their foreign reserves on an unsustainable military build up while their state-run economy lost revenue. Reagan’s Star Wars initiative—a bluff—took them to the mat.

The same so-called ‘experts’—Richard Haass and Henry Kissinger—who had pressed Presidents Nixon and Reagan to bend to the Soviets also pressed for America to bend to China and bring them into the WTO with most-favoured nation status. They promised the world that by doing so China would turn toward Western ways, democratise, adopt the rule of law, and become a fair trading partner.

Wrong.  4,000 year-old China simply put the Western World under ‘Barbarian management’ as it had always done with its enemies before, and transferred the world’s supply chain to its own shores using U.S. trade deficits to finance it. This was done with great enthusiasm and assistance from the One Worlders and Davos/Wall Street whores who profited so enormously from selling out their own nations and people—as they are still doing today.

So, why is this ‘war’ so important now?

From 1946 to 2000—the year the One Worlders brought China into The World Trade Organisation—the United States had averaged an annual 3.5% rate of growth for all of those postwar years.

Then China was intentionally allowed to hollow out Western manufacturing by these questionable Davos policies, which caused that growth rate to fall and average only 1.9%—less than half—ever since. The manufacturing base for final assembly—and the Western world’s supply chain—rapidly relocated to China. Factories closed by the thousands and millions of displaced workers fell into hopelessness, despair, poverty, and ultimately, addiction. There was an unparalleled opioid crisis when President Donald Trump took office, which is only now subsiding as hope and jobs return to America.

As recently as 2015, President Barack Hussein Obama claimed this process caused by his One World comrades to be “irreversible.” He said at a town hall meeting in Elkhart, Indiana during Trump’s 2016 campaign, that those jobs “are just not coming back,” and joked of then candidate Trump’s claims to the contrary saying, “What’s he got? Some kind of Magic Wand?”

Like most of Donald J. Trump’s critics, Obama underestimated him. By returning to sensible economic policies and ending the Left’s anti-business— and therefore, anti-worker—climate for industry, manufacturing did not just return, it raced home.  Trump did three simple things to cause this:

But to keep those jobs, China’s illegal and unfair trade practices that steal U.S. intellectual property (and force U.S. companies to transfer technology and Intellectual Property to them) while holding U.S. investments hostage must end—and it must end now while China’s trajectory is reversible.

So, what’s next in this war?

The stakes are high, and against all advice, President Trump fired the first volley. He put heavy tariffs on the Chinese to press them on these issues.  In the long-game China plays so well, they first agreed to make a deal, then reneged—a strategy that has been allowed for the past three U.S. Administrations without penalty.

Wrong guy this time.  Trump doubled down—added new tariffs—and they’re only going up and up until four things happen:

While the world thinks of China as having unlimited funds—like the world believed of the Soviets in Reagan’s day—Trump has done his homework too.

There are huge cities built to add assets to the books that have no purpose.  Like the Potemkin villages built along the rivers of Europe—nothing but walls to fool the enemy in days of old—the Chinese have built entire uninhabited cities to create a false facade of extraordinary growth that—while impressive—is not productive.  It’s a fraud, in fact, to give an appearance.

So, let’s talk money – and war

The U.S. banking system is estimated to have $19 Trillion in assets—and as we saw back in 2008—not all of them are good. So how good are China’s?

China claims its banking system with a far smaller economy, has $49 Trillion in assets—more than twice as much as the U.S., which does not compute.  Further, roughly $45 Trillion of those ‘assets’ have been ‘added’ just since 2008.  How? Or should we say, ‘Really’?

It was very telling on President Trump’s first trip to China two years ago that President Xi’s government expressed zero interest in an increased U.S. presence or investment in its industrial sector, while strongly encouraging U.S. financial firms to come in to China and invest and partner with its banks— sinking money into a growing, deepening hole.

And it doesn’t have to be a shooting war, though a little of that may happen as Xi tests the world’s resolve by continuing to illegally build military islands.

The South China Sea has been called the superhighway of commerce. Estimates vary but between $3.37-5.3 Trillion dollars in commerce pass through this body of international water each year, carrying more than 30% of all global maritime trade in crude oil.

Allowing China to ring fence this passage with military ‘battleship’ islands renders all others in the region little more than vassal states, and the world’s commerce a potential hostage to China’s seemingly unlimited ambitions.

The Western World and its Pacific allies (Japan, Taiwan, S. Korea, Australia, The Philippines and New Zealand) must stand together.

Whether you like President Trump or not, he has rather heroically—and single-handedly—set  up geo-strategic alliances with chosen nations.

The goal is to compete with China by recreating a Western alliance supply chain that is not reliant on or subject to the whims of what President Trump’s advisor, Steve Bannon, once called China’s ‘mercantilist totalitarianism’.

One-by-one, as these nations make one-on-one deals with America, that geo-political reality is coming true.

Just this week at the G-7, as example, Japan agreed to line up with the President’s Western supply chain alliance, as did the UK’s new Prime Minister, Boris Johnson.  South Korea’s agreement is already in process.

One by bloody one—we must come together, and jointly call on China to end this militarisation of the South China Sea—or put them on notice that the assets on those illegal islands will be removed without their permission if they don’t.

By creating an alternate supply and manufacturing chain outside their borders, the debate becomes a real one.

The Western Alliance will have chips on the table and become immune to economic pressures. One financial quarter of boycott on Chinese goods will bring Beijing to its knees.

To save ‘face’, it could be proposed that a joint international force occupy these stationary battleship islands to protect this important waterway.

If that ruse does not work, then it is time for joint pressure and ultimately action.

While China is in a major economic downturn and seriously overextended financially with growing domestic unrest is the perfect time to make a deal.

And that is an Art the President of the United States knows quite well. You could, in fact, say he ‘wrote the book’ on that subject.