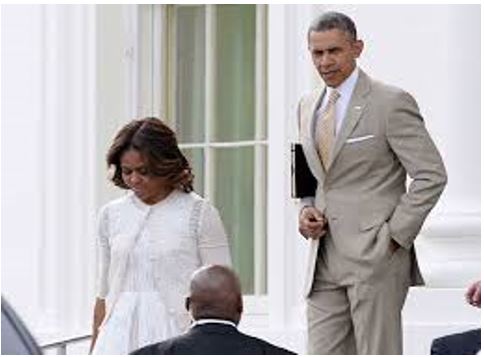 WAS A RECORD SET BY OBAMA’S CHICAGOLAND GANG FOR SCANDAL AND CRIMINAL CONDUCT?

Can you believe just a few years back the media freaked out over Barrack Hussein Obama wearing a tan suit at the White House? They suggested it showed a lack of seriousness.  This was the mainstream media’s idea of cutting-edge reporting.  Yes, the audacity of taupe, how outrageous! And now the same media claim that was his only scandal. Right. Just ignore the facts and it all goes away!

So yeah, they went nuts over a tan suit while asleep at the wheel regarding incredible and repeated scandals surrounding his administration for a decade to date and I think you know why. The MSM gang love their Man in Tan. He walks on liberal water.

But we deal in facts here, so I’ll tell you there was ‘Fast & Furious’, ‘the Clinton e-mail scandal’, ‘Benghazi’, ‘the IRS targeting of Conservatives’ and many, many more criminal enterprises that might have taken down a less-tan president.

In case you missed these others with the media black out of unbelievably corrupt events from the Man in Tan Gang’s time in office, I’ll shorthand them for you:

I’ve got many, many more without even touching on their now-proven, attempted coup against Trump, and more criminal conduct continues to come to light each week.

SO MANY SCANDALS, SO LITTLE TIME

Despite all of this, the media band plays on, “We’re in love with the Man in Tan” they sing, while refusing to report on these appalling crimes.

So, it really got to me when I heard a CNN reporter quote Obama’s Vice-President, Joe Biden, who said on the campaign trail just last week that their administration had been ‘scandal free’. These so-called journalists actually let that lie pass without challenge or comment.

The CNN miscreant even quoted the Criminal-in-Chief himself saying, “I’m extremely proud of the fact that over 8 years we have not had the kinds of scandals that have plagued other administrations.”

After getting my blood pressure back under 200, I realised that Obama was actually right!  No administration in history has ever had the ‘kinds of scandals’ he had.

The Tan Man Gang weren’t just enriching themselves –we’ve come to expect that of politricksters. Their scandals were outright treason against their nation and people!

NOW I’VE GOT A NEW ONE FOR YOU

Investigative reporter, Peter Schweizer, recently published a book, Secret Empires, which details a hoax that I missed completely but should have caught onto as I was very much involved with Obama’s disastrous energy policies from the victims’ side.

I spent the better part of two years fighting to save the coal industry in Virginia and West Virginia back in 2013-14. I should have seen what was really going on, but I didn’t.

Most of us just aren’t wired to believe people can be so corrupt—but Libtards come in only one size and that’s corrupt—so this one’s on me.

Obama’s Friends Were Getting Rich

While Obama was deploying the bully pulpit of his office to trash and destroy every form of energy other than unsustainable ‘sustainables’, his closest friends and financial enablers were scooping up literally billions of dollars-worth of those same energy companies’ stocks at rock bottom prices–all documented by Schweizer and unchallenged by some of the richest, most powerful men in America.

It was a very sure and calculated bet.

They knew that the only dependable energy source for the foreseeable future is fossil, at least until nuclear comes back into vogue or something new is found.

As an example, one of Barry’s closest buds, John Rogers, set up a company called Ariel Investment. It appears as if he used their relationship and the information which came with it (which he denies, but I’ll let you decide) to cash in on the White House’s harsh policy declarations against fossil fuels and the related companies by purchasing shares when the prices tumbled days later.

In short, Rogers visits the White House for private talks one day, Barry trashes offshore drilling the next.  Rogers then buys up stock in offshore drilling platforms for a dramatically lower price, and on it went. Now, he is a very rich man.

We now know it wasn’t just Rogers.  These are facts according to the White House visitation logs and history. X visits the White House. Stock Y is trashed, X buys it after the informed trashing. X reaps millions or billions- wash, rinse, repeat.

In Peter Schweizer’s book, he calls it the “Smash and Grab”, and gives strong evidence that nobody ever did it better than The Man in Tan Gang.

Another case of Billionaire Barry Bros is Tom Steyer. In Schweizer’s book, Secret Empires, he explains that Steyer was the most aggressive Smash and Grabber of all.

Steyer is now putting up $100 million of his own profits to run for president and has raked in stacks of cash from what may have been his best investment ever – which was buying the ear of Barrack Hussein Obama early on.

But Tom Steyer is not one to play a minor role.  No Sir, Tom’s ego requires a bigger, if not leading, role. So, he not only played in the opera, he was lead tenor as well.

Steyer, according to Schweizer, used his Farallon Capital Management operation to profit from insider information. He went so far as trashing fossil fuels by day in speeches for the White House—even telling institutional funds they must ‘dump’ them for moral reasons – whilst concurrently grabbing every share he could; making billions in the process.

He’s now using that money to fund his own run for the White House against President Trump.

Tom-Boy’s role in this fraud goes beyond just being a hypocrite. He intentionally drove down a company’s stock with false information while speaking on behalf of the President, no less. Then, he sponged up the shares after the mis-information campaign had taken its toll in the markets, which is criminal conduct from what I’ve read of such schemes. A lot of poorer less-connected men are in prison for that.

Of course, the Tan Man would never be so stupid as to leave his main funder, Uncle George Soros, out of the fun  So while selling the same global warming BS through his ‘Open Society Foundations’, Soros’s Quantum Fund was buying up petro and fossil stocks like water before a hurricane.

None of these oligarchs would risk such amounts of money unless they had the inside knowledge that Obama was a knowing part of the global warming hoax for political purposes.

They knew that the shares of real energy companies they were buying at his Administration’s induced fire sale prices would rebound to their benefit—just as they have—and they did so in spades.

But as Obama’s inner circle was raking in billions, I was on the ground watching tens of thousands of miners lose their jobs.

I even met with a presidential advisor who calls himself ‘Mudcat’—I’ll leave it at that—insiders can figure it out from there. The purpose of the meeting was to ask why his party had abandoned working people and miners.

He got back to me days later saying that for a substantial fee, he could ‘hook me up’ to buy cheap assets in West Virginia coal mine stocks.  I also got stuck with the tab for dinner with him and his girlfriend, proving he was a Democrat, of course.

Driving up Highway 52 in West Virginia back then was as depressing a sight under Obama, as it is an encouraging one today under President Trump.